Edmund Burke, who is often regarded as a spokesman for modern conservatism, believed that human rights were based on tradition and could only be inherited. Burke strongly opposed the French Revolution, which in his view, attempted to break from the traditions of France and destroy their contemporary society. On the other hand, Jean-Jacque Rousseau believed that general will would always be correct and that it would unshackle humans from their chains, allowing them to become free. Burke and Rousseau had similar and contrasting views in terms of human nature, the origin of government, and the relationship between the government and the governed.

Don't use plagiarized sources. Get your custom essay on
“ Edmund Burke and Jean Jacques Rousseau ”
Get custom paper
NEW! smart matching with writer

Rousseau challenged the present state of society around him by questioning the obsession over material possessions and the morality of a society. He stated that it was impossible for humans living in contemporary conditions to achieve moral and sincere lives due to the corruption of human nature. In the state of nature, humans were dignified beings, but civilization and increasing knowledge had corrupted these creatures to pursue their own selfish goals.

According to Rousseau, society was created to nurture better people. In such a society is more important as a whole than its individual members because these members are merely a part of a larger group.

Burke wouldn’t completely agree with such a view on society for he describes society as a contract that is nothing more than a temporary partnership made for profit only to be discarded later when it is no longer needed. However, traces of the partnerships are carried onto the next generation, uniting groups of people for large amounts of time.

In this sense, the society in Burke’s view is similar in that it holds the same amount of importance that it does in Rousseau’s.

Although Burke advocated the American Revolution, he criticized the French Revolution. According to Burke, people’s rights are based on tradition, they are entitled to whatever rights were left over from their ancestors. Burke thought that the revolution went against tradition and would overturn the present state of society. During the American Revolution, institutions were not destroyed, merely improved upon. The colonists were under British rule and therefore under British law. As citizens of Britain, they were entitled to rights dated back to the Magna Carta, they just needed to be regained. In France, Burke saw institutions that did not have to be destroyed, but repaired and worked with instead.

Rousseau would have strongly disagreed to Burke’s view on government. In his view, society created evil and government was created to combat such evil. Selfish governments like the ones suggested by Burke would have produced the evils Rousseau’s sought to combat. He believed that selfishness would have corrupted government, not give birth to it. Government functions to aid the society through popular sovereignty and the “general will” of the citizens, not the individual. Unlike Burke’s ideal government, “general will ” would have been heard in Rousseau’s.

The famous quote spoken by Rousseau, “all men are born free, but everywhere he is in chains” expresses his support for freedom in all his views. On the other hand, Burke looked to keep traditions and condemned everything that would possibly break it. With Burke being a conservative and Rousseau somewhat liberal, it seemed like they would have been opposites. However, they both had similar opinions, such as the purpose of society and its importance.

“Reflections on the Revolution in France.” Transmitting the Wisdom of the Ages. 1993. . 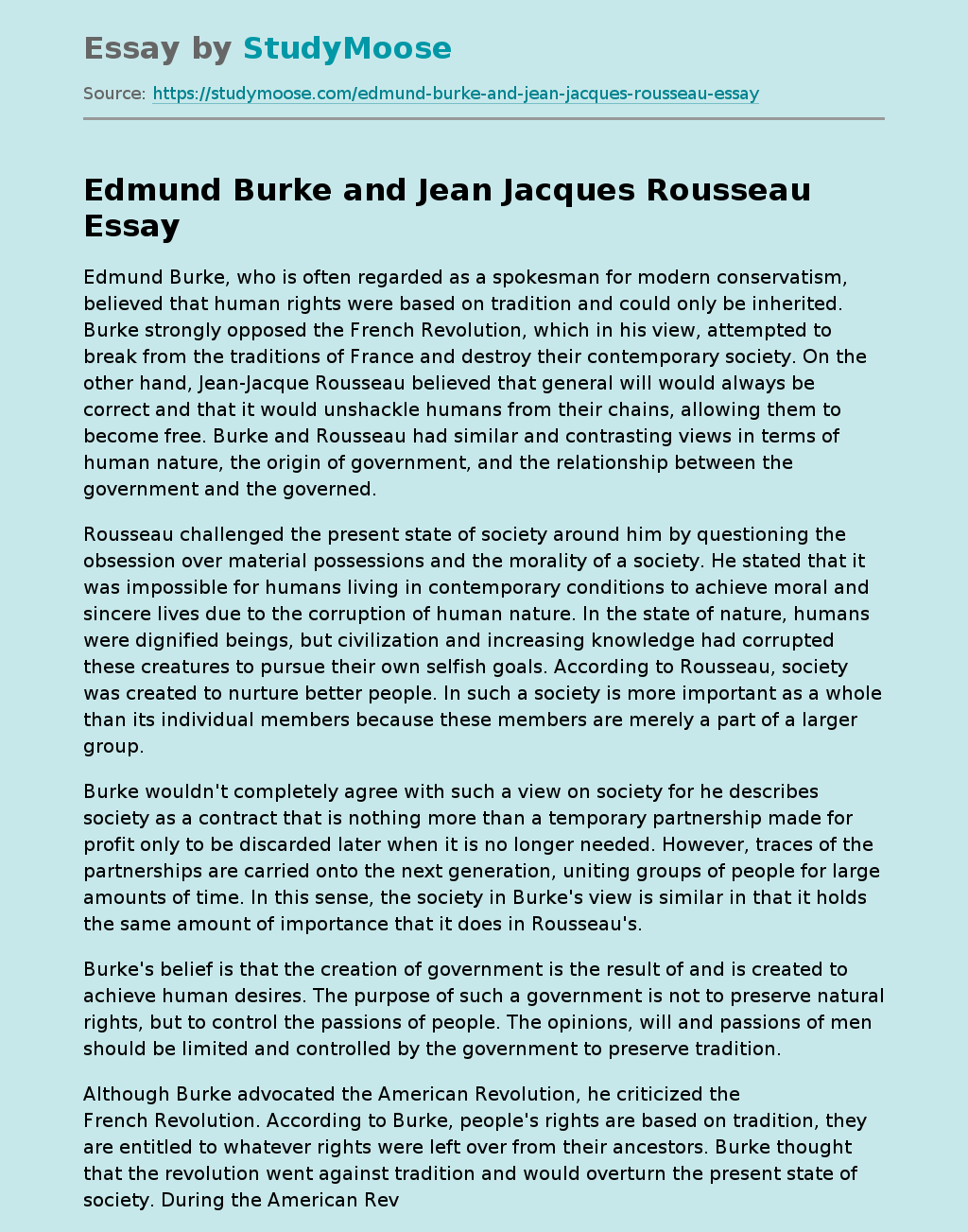