When you hear the name Edgar Allan Poe it’s sure to conjure up thoughts of the macabre, mystery, death, and madness all of which are pivotal in the writings of Poe. His first works, Tamerlane and Other Poems, was published in 1827 with many short stories, poems, essays, and other writings to follow. He was a resourceful writer, but he was particularly known for his short stories and poems, even being dubbed the architect of the modern short story.

Some of his classic and best known writings were “The Tell-Tale Heart”, “The Raven”, “The Black Cat”, and “The Fall of the House of Usher”, all of which included the morbid characters and melancholy themes he was so famous for writing about.

Don't use plagiarized sources. Get your custom essay on
“ Essay On Edgar Allan Poe ”
Get custom paper
NEW! smart matching with writer

His stories have captured imaginations for generations lending much debate on his obvious or hidden meanings. It is thought by many that Poe’s real-life experiences with death, misfortune, rejection and madness sculpted his bizarre thoughts which were undoubtedly intensified by excessive drinking.

Poe was born to traveling actors on January 19, 1809 in Boston. He was the middle child, having one sister and one brother. Poe’s first experience with death came at a very young age as his parents died when he was approximately three years old. Afterwards his siblings were sent to live with relatives while he was taken in by a wealthy tobacco merchant, John Allan and his wife, in Richmond, Virginia. Their desire was for Poe to follow in Mr. Allan’s footsteps and become a businessman; however, Poe had no such desire; his passion was writing.

He wished to be like his childhood hero the British poet Lord Byron (Poe Museum). Poe attended college at the University of Virginia where he was a stellar student; however, his lack of funds turned him to a life of gambling. This only served to exacerbate his poverty to the point he had to burn his furniture to keep warm. This would be the beginning of not only his gambling addiction, but also his excessive drinking. Upon his departure from the University he found out his fiancee had married another man while he was away.

Due to the strained relationships with his family, and the rejection of his fiancee, he left home at the age of 18. It was also at this time that his first works were published. Although he had been published, he still didn’t earn enough money to support himself so he enlisted in the Army. His Army career was short-lived as Mr. Allan paid his way out after only two years, but in turn he assisted Poe in securing an appointment to West Point. As with the Army, this was also short-lived. After only five years he managed to purposely get himself court-martialed and dismissed from West Point (Hallqvist).

Upon his dismissal from West Point he returned to Baltimore where he resided with his aunt and his cousin Virginia. Shortly afterwards Mr. Allan passed away and upon his death Poe learned that Mr. Allan had disinherited him; another blow to the heart and mind. At this point in his life, Poe turned his focus to not only writing, but also to critiquing the works of others. He secured a job at the Southern Literary Messenger where he earned the reputation of a ruthless critic, criticizing not only the works of authors, but the authors themselves. This led to many reservations and untruths regarding Poe.

Many looked to discredit him through tales of his madness and bizarre actions ( The Edgar Allan Poe Society of Baltimore) Poe’s work forced him to move among several cities. He brought his aunt and cousin Virginia to Richmond where he took the 13 year old Virginia as his bride. For once, is seemed, Poe had finally found happiness. Discouraged with his job, he decided to move the family to New York City. Once there he found it very difficult to find work. After one year he moved the family to Philadelphia where he found work at several different magazines.

It was here that he published some of his most famous works, “The Black Cat”, ” The Tell-Tale Heart”, and “The Fall of the House of Usher”, all of which entailed tales of sinister deaths and examined the depths of the human psyche. Poe was getting his works published, but he still could not seem to rise from the poverty level he had known all his life. To make things worse, his wife contracted tuberculosis in 1842. This served to intensify his drinking as he could not bear the stress and heartache of her illness (Independence Hall Association).

Still in search of a better life, Poe decided to move back to New York in 1845. Within a year of the move his most famous poem “The Raven” was published to instant success. He was finally a household name and with that distinction came more money but not happiness. Tragedy once again struck when Virginia died two years later. After her death some concluded that “The Raven” was written with his knowledge of her inevitable death. Poe continued to write until his death in 1849 which itself was veiled in mystery much as his writings were.

There are several versions and speculations about where Poe was found and the actual cause of his death. Among the rumored causes of death were alcohol, rabies, syphilis, cholera and even murder. One of the questionable events of his death was that he was found wearing someone else’s clothes and he was babbling the name “Reynolds” (Poe Museum). No one knew who this person was or if he had any hand in Poe’s death. To further the intrigue, it seems Poe’s medical records strangely disappeared after his death. To this day, the truth surrounding his death remains unknown.

Poe suffered many years of rejection from his family, acquaintances, and literary colleagues. Many presume his writings stem from the losses of all the women in his life. The comparison of Poe’s life and work is most evident in the ominous personalities and melancholy themes of his literary masterpieces, paralleling his life. The irony is the misfortunes in his life, which caused him great pain and ultimately led to the diminishing of his self-worth, amassed into some of the most-read and most well-known short stories and poems in literature. 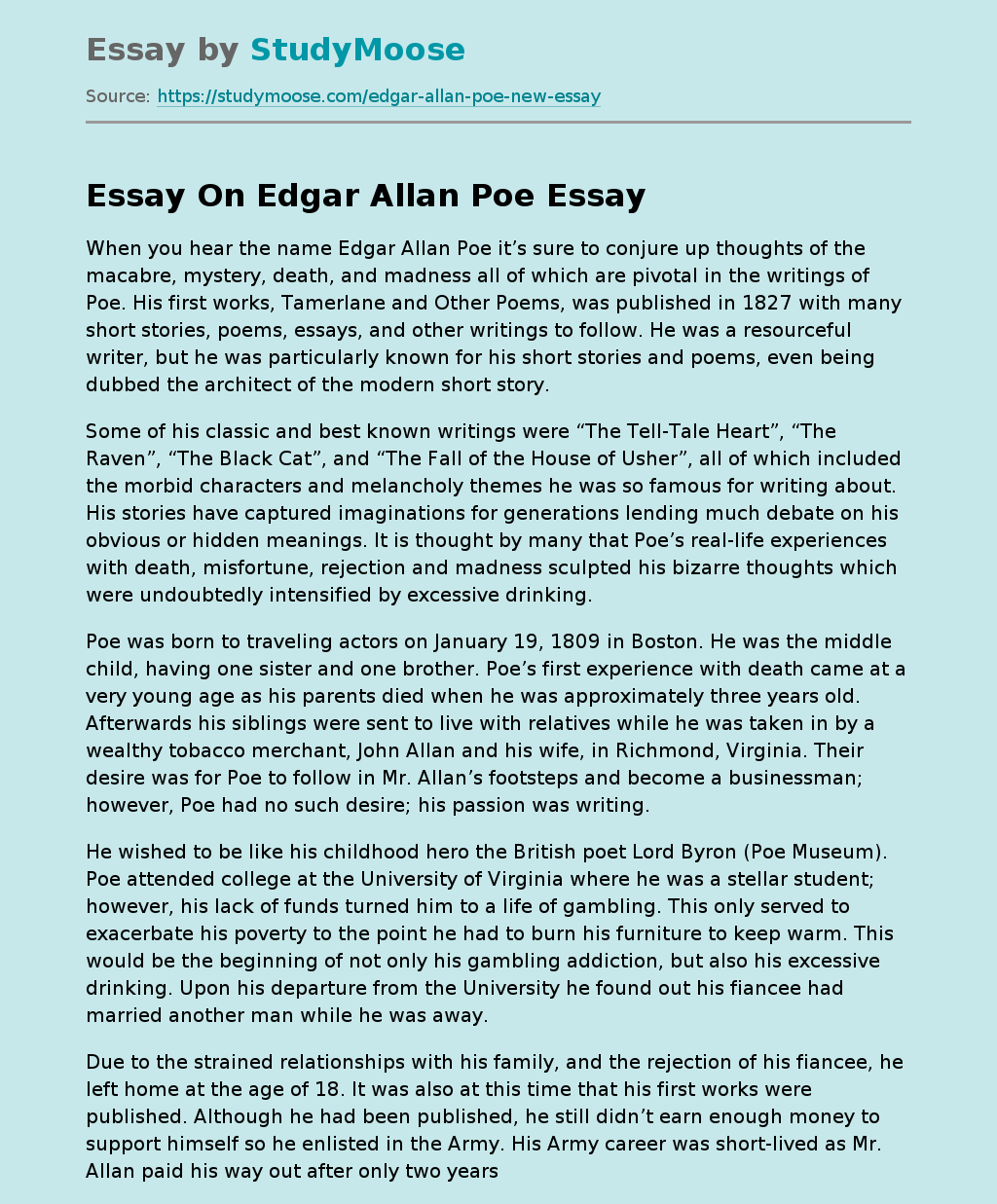