Ecosystem of Piedmont Region of Georgia

The ecosystem I chose to talk about is the Piedmont region of Georgia, which sits just below the northern mountains and the coastal plains, this region may be the second-largest geographical region, but it is the most populated area in Georgia (Jackson & Stakes, 2004).

Don't use plagiarized sources. Get your custom essay on
“ Ecosystem of Piedmont Region of Georgia ”
Get custom paper
NEW! smart matching with writer

Surprisingly, Georgia also happens to be the 24th largest state in the United States and is home to five major ecosystems: The Piedmont plains, Appalachian Mountains, Coastal plains, and Okefenokee. The Piedmont region, however, only takes up thirty percent of the state and consists of mostly hills and valleys, though some of the hills look like mountains themselves (Jackson & Stakes, 2004). Not to mention that the land is also able to support large forests.

Underneath the surface you can fine large amounts of solid rock, such as granite, gneiss, and marble, this is referred to as bedrock (Jackson & Stakes, 2004). This bedrock is not like the rocks found in the Coastal Plain, it is very hard, it is for this reason that we commonly see areas of exposed bedrock, which are called outcrops, where the soil has been stripped.

There are various streams and rivers that go through the Piedmont, but the presence of bedrock leaves the streams with shallow beds and narrow banks (Jackson & Stakes, 2004). The soil in this region, often referred to as “Georgia red clay” got its name due to its distinctive red color, this color comes from the exposed rocks breaking down over time into iron and minerals, and once the iron mixes with water it gives the soil a rusty look (Jackson & Stakes, 2004). The Piedmont region is a great place for farming, excluding the areas with outcrops or bedrock, some of the most common crops are cotton. wheat, and soybeans (Jackson & Stakes, 2004). Georgia is known as the “Poultry Capital of the World”, but a large amount of cattle is also raised here.

Moreover, we all know from our lessons that every ecosystem consists of two phenomena: energy flow and chemical cycling. We know that chemical cycles start when producers absorb inorganic nutrients from its surroundings, but what we didn’t know is this nutrient can only be shared between producers who live in the ecosystem or are in between (Miller & Levine, 2010). The beginning of an energy flow is a little different, it starts as soon as a producer absorbs light, which means that ecosystems cannot exist with solar energy. Because of the sunlight they receive a producer can make their own food and feed others who are a part of their ecosystem indirectly. The way this happens is due to the nutrients that these producers get and pass from one organism to the next until the energy is converted to heat and evaporates into the environment (Miller & Levine, 2010).

Now that I have explained how energy flows, I think it is important to know that only a small amount of the organic nutrients made by autotrophs are given to the heterotrophs. The reason behind this is because the plants use these organic molecules to fuel cellular respiration (Miller & Levine, 2010). Isn’t it interesting, who would have thought that only a small percentage of the nutrients taken from autotrophs by heterotrophs is available to their predators. A large amount of it goes into debris feeders through excretion, death, and excretion and once the energy that is left over is used during cellular respiration it is turned into heat, and the food that is not digested by the herbivore comes out as feces, while the metabolic waste comes out as urine, and in carnivores any leftover food is added to its body weight (Miller & Levine, 2010).

Thus, the elimination of feces and urine by heterotrophs, and the death of organic substances are lost to the ecosystem (Miller & Levine, 2010). These nutrients are still accessible to decomposers, but it’s a little more complex since decomposers can also be food for other heterotrophs. So, I repeat, all solar energy put into an ecosystem exits as heat, this is consistent with the fact that ecosystems need solar energy. The laws of thermodynamics support this fact, in fact the first law states that that energy cannot be created or destroyed, which explains why ecosystems must get their energy from an outside source (Miller & Levine, 2010). The energy I am talking about is solar energy, I know I’ve repeated this time and time again throughout the paper but, solar energy is how plants get their nutrients. Which brings me to the second law, this law says that as energy is consumed some of the energy becomes less available (Miller & Levine, 2010). This is because plants use most of the energy during cellular respiration, so the amount they don’t use is what goes back into the ecosystem. Simply put, energy flows in an ecosystem and a chemical cycle.

As I said in the beginning of me paper, Georgia is home to four ecosystems, but its biome is temperate forest, meaning that the season change from hot to cold. The easiest way to explain this would be that a biome is a certain place with native animals or plants, all the plants and animals that live here are gifted with special traits to help them survive in this place (Miller & Levine, 2010). As I mentioned in the first sentence, the seasons change in this biome, so the plants that live here must be able to survive the warm summers and cool winters.

Additionally, water, soils, sun, and climate can all affect the cycle, having an excessive or scarce amount of these can mess with the whole balance (Miller & Levine, 2010). An example of this would be if plants could not get sunlight, without it they could not produce any energy for themselves and would start to die off and if there are no plants than primary consumers would die and so on. The same can also be said about the ratio between prey and predator, if anything is slightly off it can mess with the whole cycle. If there is an increase in predators there would not be enough prey, and if the amount of prey increased there would not be enough predators, so the prey would overpopulate.

Generally, the trees have a thick bark to protect them against cold winters, animal invasions, and insects, this same bark also keep them from drying out, and they can save water by shedding their leaves in the fall (Miller & Levine, 2010). Some examples of common plants that can be seen in the area are Kudzu, pine trees, oak trees, hickory trees, and dogwoods trees. The animals that live here are covered in furs that allows them to deal with the fluctuation in temperatures, and they use their claws and talons to hunt their prey (Miller & Levine, 2010). In this region it is common to see raccoon, squirrels, turkeys, opossums, whitetail deer, and other animals. I will talk more about the white-tailed deer later and explain the role it plays in the flow of energy.

The white-tailed deer lives in the northern region, its hooves allow it to walk along rugged terrain, and the fur that covers its body is how they stay warm in the winter (Miller & Levine, 2010). They are usually found in wooded areas, because of this they have a special digestive system that lets them woody plants. The cycle begins as soon as plants get sunlight, the plant is then eaten but a primary consumer, such as the white-tailed deer, meaning they are the first to receive energy from the producer, and when the deer is eaten by a secondary consumer, which in this case would be a coyote, they become the second ones to receive this energy (Miller & Levine, 2010). This cycle will continue until there is not more energy to pass on. Energy only goes on way and when new energy is produces it stops.

To sum it all up, this paper is about the Piedmont region in Georgia, which has a temperate forest biome. This biome has changing seasons ranging from hot to cold, and we know that their leaves shed in the fall to keep them hydrated. We have also learned that the animals and plants that live in the Piedmont region have unique traits that help them survive. We also know that there are four abiotic factors that can change the cycle, and that if anything is off in the cycle than it affects the whole thing. So, I repeat, if there is an increase in predators there would not be enough prey and vice versa. Energy that is consumed by a primary consumer decreases as it is passed down, and lastly, the cycles start with producers, then the primary consumers who eat the producers, and then secondary consumers who eat the primary consumers.

Ecosystem of Piedmont Region of Georgia. (2021, Feb 09). Retrieved from https://studymoose.com/ecosystem-of-piedmont-region-of-georgia-essay 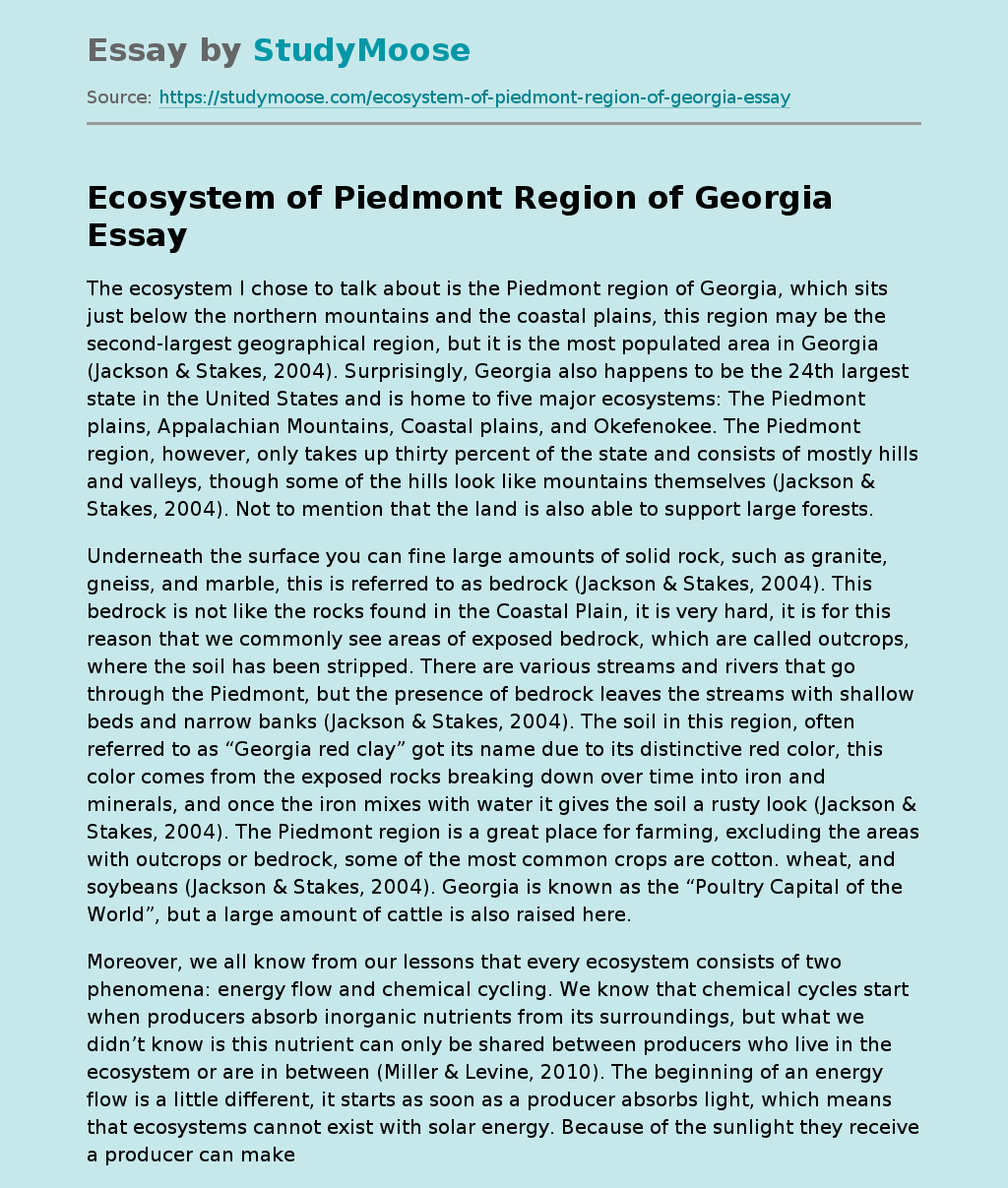