Due to Spratlys’ potential in terms of prosperity in resources, many countries are interested in claiming its ownership, namely Taiwan, Vietnam, Malaysia, Brunei, China, and Philippines. The Spratlys are located in the South China Sea between these countires. There are a number of reasons why the neighboring countries want to own the islands. Firstly, it is a great source of oil. It is estimated that the Spratly holds even greater natural gas reserves compared to Kuwait and is the fourth largest reserve bed in the world.

Turn in your highest-quality paper
Get a qualified writer to help you with
“ Economy and Other Claims Concerning Spratly Islands Dispute ”
Get high-quality paper
NEW! AI matching with writers

From this, China’s motive could be seen since they have inadequate oil refinery and extraction capabilities.

On the other hand, Brunei, being already a main producer of oil, has a different focus which will be discussed next. Second are the resources available for commercial fishing since coral reefs are the predominant structures of these islands. It is considered as one of the world’s most productive areas for commercial fishing. Owning these rich resources of marine life would lead to sustained economic growth.

Lastly, the waters surrounding the Spratlys are one of the busiest shipping lanes of the world. Since Vietnam is dependent on sea route on South China Sea, owning the islands would give them a secure sea route.

Now, the real question is “Who is the RIGHTFUL owner of the Spratly Islands? ” Well, as a Filipino, I believe that the Philippines rightfully owns the Spratlys and today, I would prove our country’s ownership over the islands. The Philippines’ claim could be based on Res Nullius which means “nobody’s property”.

It means that any uninhabited or abandoned island belongs to the discoverer. There was no sovereignty over the islands until 1930s when France, then Japan acquired the islands. However, Japan renounced their ownership as stated in the San Francisco Treaty in 1951.

Since then, the island became Res Nullius and available for occupation. Later in 1956, Tomas Cloma, a Filipino, independently declared a state on the islands, calling them “Freedomland”. Cloma then sold his claim to the Philippine government and in 1978, President Marcos declared the Spratly Islands, or the Kalayaan Islands, as Philippine territory as per Presidential decree no. 1596. From this, it could already be proven that the Philippines already declared its ownership over the islands when it did not legally belong to any state.

As we all know, the Philippines is an archipelago which means that we are a cluster of islands which is divided by bodies of water. In order to prevent our islands from being separated from the mother nation due to the waters surrounding it, there is the Archipelagic Doctrine. This principle is also incorporated in the Philippine constitution which states that “The waters around, between, and connecting the islands of the archipelago, regardless of their breadth and dimensions, form part of the internal waters of the Philippines.

Actually, the Philippines was the first country to declare the archipelagic state concept in 1955. Since the Spratlys are still within the Philippine waters, it could then be said that the islands are within our territory. Another basis for the Philippines’ claim is the Law of the Sea Treaty. This is created to establish clear-cut rules governing the oceans. It created specific limits on oceans which countries may claim as their own which includes a 12-mile territorial sea limit and a 200-mile exclusive economic zone limit. An exclusive economic zone is a seazone which a state has special rights over.

To sum up, there are a number of legal bases for the Philippines’ claim on the Spratlys such as the Res Nullius, Presidential Decree No. 596, the Archipelagic Doctrine, and the Law of the Sea Treaty. Aside from these legal grounds, we could also base our claim on historical events such as the discovery of the island by a Filipino citizen after it has been abandoned by Japan and the transfer of the rights to the Philippine government through sale. Lastly, geographically speaking, the Spratlys could be found closest to the Philippine territories and it is within the 200-mile exclusive economic limit zone. Hence, we, the Filipinos, could say that we are the rightful owners of the Spratlys. 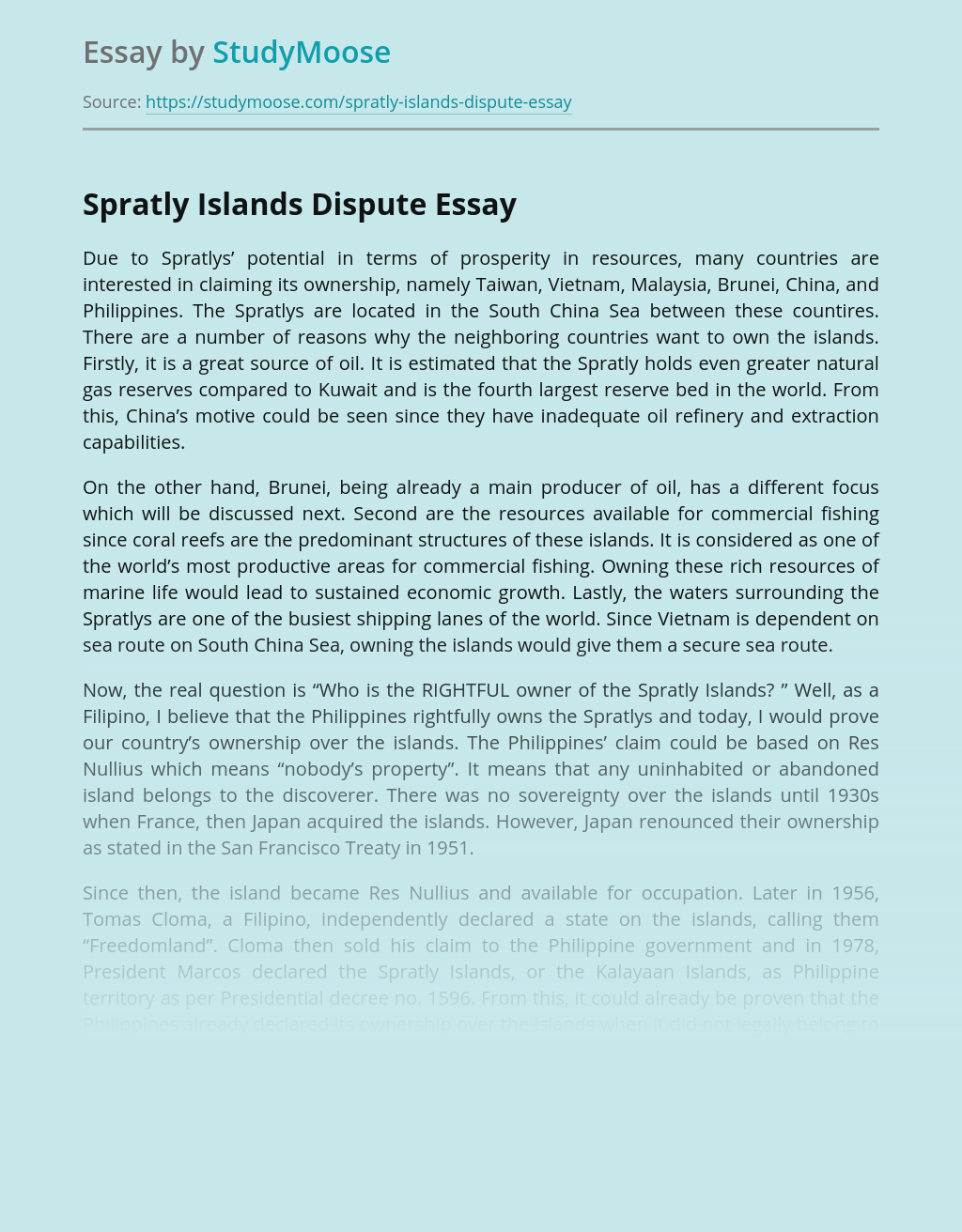 Turn in your highest-quality paper
Get a qualified writer to help you with
“ Economy and Other Claims Concerning Spratly Islands Dispute ”
Get high-quality paper
Helping students since 2015
Stay Safe, Stay Original