An analysis into the involvement of adults in the financial sector.

Purpose of Investigation
The purposes of this research are:

Methods of Investigations
The primary source of information used in this project is:

1. Questionnaire. Thirty-one questionnaires were distributed to residents of Canaan. All the persons responding were eighteen and over.

Don't use plagiarized sources. Get your custom essay on
“ Economics Sba ”
Get custom paper
NEW! smart matching with writer

Frequency of Use of Stock Market Service

Analysis and Interpretation of Data

Description of Financial System in Trinidad and Tobago

The financial system is a network of savers, investors and financial institutions that work together to ensure that savings are transferred to investors.

The financial system consists of two sectors: formal and informal. The formal sector includes all the financial institutions that are regulated officially, such as, commercial banks, credit unions, central bank, stock exchange and insurance companies. The informal sector includes all financial activities that are not under official control, such as, sou sou, money lending. The functions of the Central Bank are:

A commercial bank is a financial institution that is engaged in money transmission services and is jointly owned by shareholders.

The Trinidad and Tobago Unit Trust Corporation is a mutual company that dominates the mutual fund market in Trinidad and Tobago. There is a branch in Scarborough, Tobago. The Western Union Company is a financial services and communications company. There are several locations in Tobago, including in Crown Point, Scarborough and Canaan. An insurance company provides financial protection for property, life, health, etc., against contingencies, such as death, loss or damage. There are insurance companies in Tobago; ScotiaLife, Colonial Life Insurance Company, The Beacon and Guardian Life. A stock exchange is an organized market facilitating the purchase and sale of securities, operated by professional stockbrokers. The Trinidad and Tobago Stock Exchange is located in Port-of-Spain.

Banks in Trinidad and Tobago fall under an oligopolistic market because there are few sellers and many buyers. Credit unions are under a perfect competition market.
Unit trust is a monopoly.
Western union is an oligopoly.
Insurance companies are oligopolies.
The stock exchange is a monopoly.

Participation of Adults in Canaan Village in the Formal Sector Banks

Location was the largest factor in Canaan’s choice in banks at 24%, and customer service followed with 22%. Advertisements affected 16% of respondents, whereas 13% were influenced by friends. Both the respondents who chose at random and those who knew employees of banks earned 9% each. Unspecified reasons determined 5% of choices and age–group appeal impacted only 2%. Twenty-three adults in Canaan use banks; 13% use them rarely, 26% visit fortnightly, 30% monthly, and another 30% weekly.

Influence of friends determined 21% of residents of Canaan choice in credit union, indefinite reasons following with 17%. Respondents who decided at random earned 13%, those who chose based on knowing an employee earning the same. Customer service and location earned 12% each, advertisements affect 8% and age group only appealed to 4%. The majority of respondents, namely 35%, rarely use the services of a credit union. The second most common time span, monthly, made up 24%. 18% use credit unions annually, and 12% chose based on unspecified reasons. 6% use services weekly and another 6% fortnightly.

Advertisements influence a quarter of Unit Trust members in the village of Canaan. Customer service, friends and unmentioned reasons affected 19% each and 18% of respondents were impacted by location, age group and knowing an employee equally. Of the Unit Trust members that reside in Canaan, 45% rarely use its services. Another 45% use it monthly, and approximately 10%, fortnightly.

Customer service influenced 24% of Canaan’s residents in terms of insurance companies, 19% were impacted by advertisements and age-appeal affected 14%. Respondents who knew employees made up 10%, and those whose reason was unspecified also formed 10%. Location and friends each earned 9%. 5% of choices were made at random. 40% of villagers who have insurance use it monthly and those that use it fortnightly, annually, and at unstipulated time intervals made up 20% of respondents each.

Of the people who use Western Union/Money Gram in Canaan, an estimated 25%, were influenced by the customer service, 25% were affected by location and another 25% by arbitrary selection. Unstipulated reasons determined 17% of villager choices and 8% personally knew an employee. The most common frequency at which the services of Western Union/Money Gram were used was ‘monthly’, earning 44%. One quarter of the remaining 56% of respondents used services rarely, another quarter, annually, another weekly, and the final uses the services in an unstated time period.

1. It has been found that 100% of the adults in Canaan that use services of the formal sector. 2. There was participation in the in informal sector.  3. The main factors affecting the involvement of residents of Canaan in the financial sector are location, influence of friends, customer service and location.

1. One of the factors Institutions can appeal more to certain age groups. 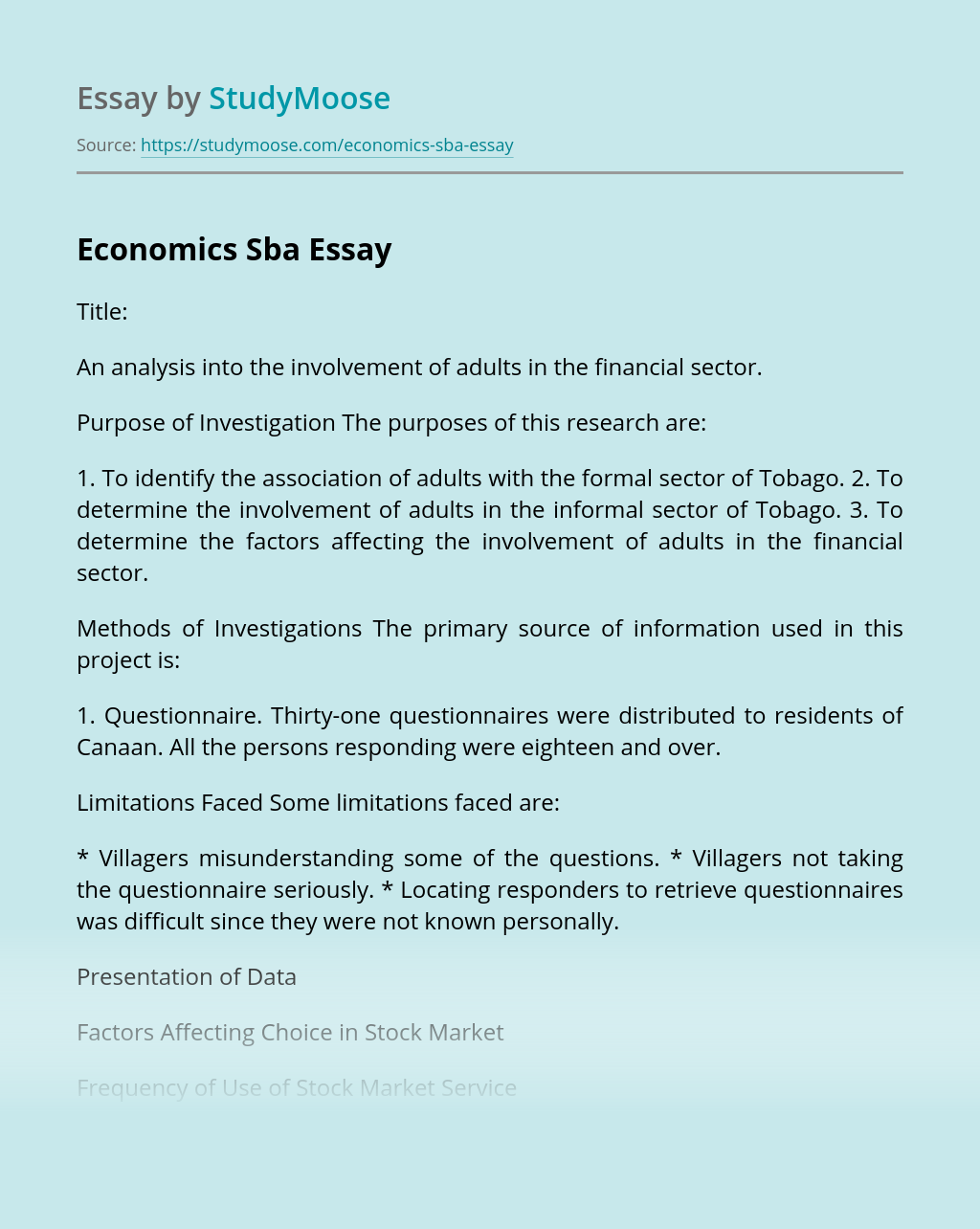