A feud between two Muslim governments, ignited by the sultan of Sulu when he and his subjects headed to Sabah to reclaim their once territory.

Some standoff that went on for over a month now.

This standoff that gained nothing but transgressions, especially on the side of the sultanate of Sulu. Their futile measures to repossess Sabah. Their defiance against the president’s orders to not proceed. This only resulting to the massacre of the sultan’s clan members. To this day, the sultan, his family, and followers were being hunted down by the Malaysian military forces.

Turn in your highest-quality paper
Get a qualified writer to help you with
“ Economics Reaction Paper on Sabah ”
Get high-quality paper
NEW! AI matching with writer

With this, they always have to take evasive action for them to survive. Then, there’s the possible criminal charges which the Kiram family might face once they go back to the Philippines.

Additional problems to be solved by the government. The people fleeing from Sabah, Malaysia because of the ongoing firefight between the Royal Family of Sulu and the Malaysian Armed Forces there; Heading to refuge camps in our country.

Also, the decline on the supply of goods in Muslim provinces in the  Philippines. The goods and services, coming from Malaysia, are having increase in terms of their price.

All of these are happening because the Malaysian government is prohibiting the people in our country to enter their territory without their permission.

Now that the facts about this issue are laid down, we will readily proceed my personal thoughts regarding this matter.

First of all, I find it a very impulsive and reckless move for the Royal Family of Sulu to start yet another dispute between the Philippines and Malaysia.

To make another historical claim in regards with Sabah is like starting a never-ending war. It only gets worse by the minute. No fruitful result reaped.

Another, I don’t think that our country could ever obtain again the rights on Sabah. I said it because we have been making claims on this for many years. Still, nothing has happened.

So what makes the sultan of Sulu think that he could, they could?

Passed by: Shunamite D.
Purificacion
I-22 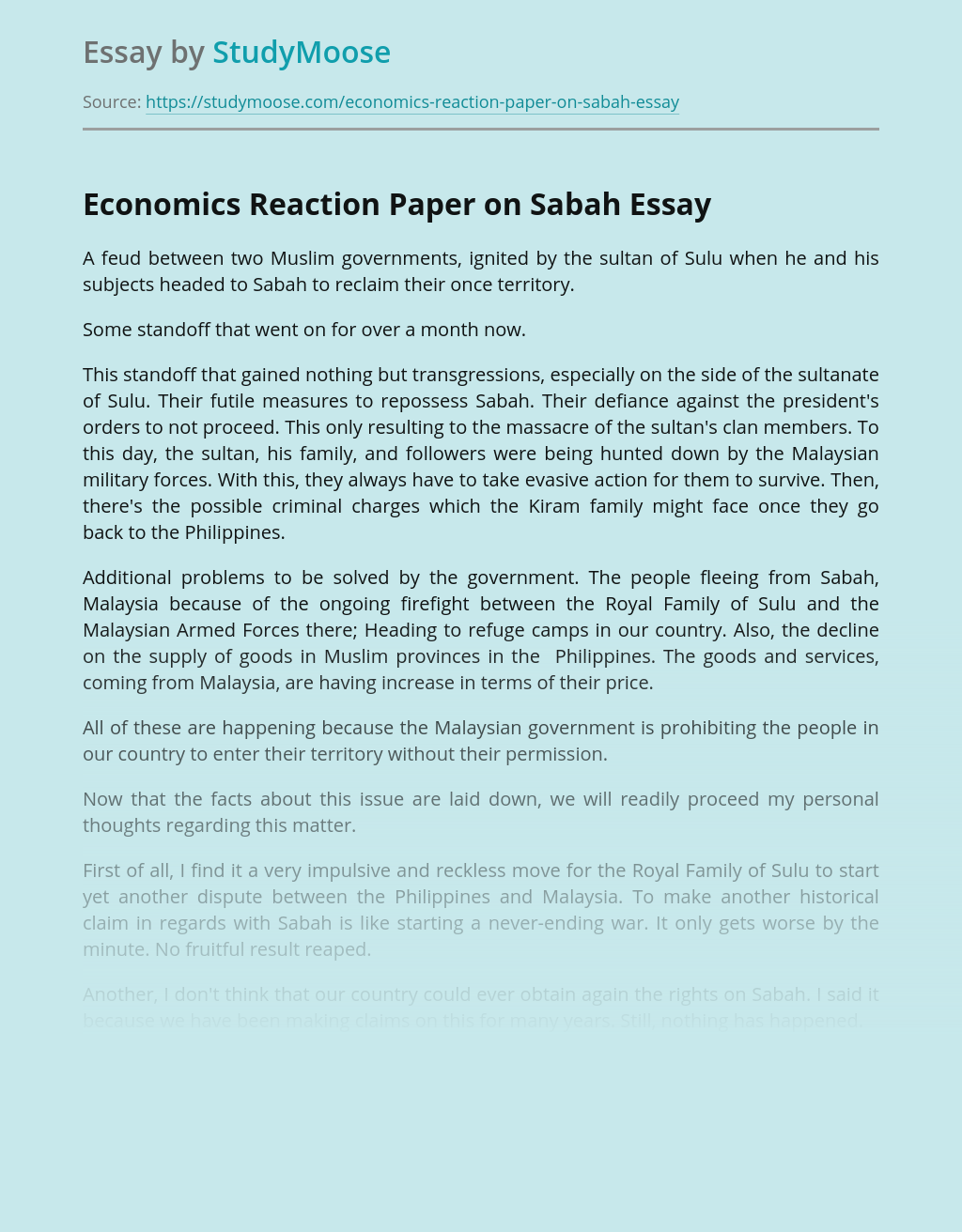 Turn in your highest-quality paper
Get a qualified writer to help you with
“ Economics Reaction Paper on Sabah ”
Get high-quality paper
Helping students since 2015
Stay Safe, Stay Original