This article reviews the developments of consumer prices in the euro area during the 2008-09 recessions. The European economy is commonly measured by using what is called the Harmonized Index of Consumer Prices (HICP). The HICP is a price stability and inflation indicator used by the European Central Bank system, assembled using methodsthat are generally accepted throughout the European Union (E.U.). The European Central Bank uses the Harmonized Index of Consumer Prices to assess when changes to short term interest rates are needed to adjust inflation levels in European economies.

Don't use plagiarized sources. Get your custom essay on
“ Economic Reaction Paper ”
Get custom paper
NEW! smart matching with writer

Compared with previous recessions, overall HICP inﬂation experienced a sharp decline, but this was the result of the greater impact of commodity price developments on the food and energy components of the HICP, rather than a response to the exceptional changes in economic slack. In fact, the more domestically generated parts of inﬂation, as measured by the HICP excluding food and energy, were relatively resilient given the severity of the recession.

This resilience was in line with the weakening relationship between the degree of economic slack and inﬂation that has been observed over the last twenty years.

Nominal rigidities in the labor markets, especially as inﬂation approached zero, and stronger expectations of inflation may have played an important role in the negative ﬂuctuations in price and wage inﬂation over the economic cycle. In the United States, developments in inﬂation excluding food and energy were also broadly in line with those during previous recessions. However, the labor cost adjustment in the United States was quicker to reﬂect the economic conditions than in the euro area as a whole, and was the result of both lower wage growth and gains in productivity.

The ﬁndings on past inﬂation adjustments can help to determine the outlook for euro area inﬂation. In particular, they can help to explain why the currently available inﬂation forecasts and projections for 2012 from private and international organizations remain elevated, despite the slowdown in growth observed in 2011.

To fully understand this article, one must understand that changes in commodity prices have a direct impact on the food and energy components of the HICP, as commodities are either consumed directly or constitute signiﬁcant input into the ﬁnal product, therefore drastically effect GDP and GNP. In the case of the energy component, crude oil is the basis for reﬁned energy products, such as transport fuels and heating oil. Crude oil prices also have a strong impact on gas prices and, to a lesser extent, on electricity prices. This is what is called profit push. When crude oil prices go up, generally all other prices go up due to oil’s general overhead and it’s versatile usage in the production and transportation of goods and services. The level of oil prices also has implications for the weight of energy in the HICP basket. The above-average price trend of energy products, together with rising energy consumption, has translated into a steadily growing share of energy in total consumption. As a result, the weight in the HICP basket in 2011 was over 10%, which is almost double what it was in the 1970s.

Mechanically, this implies that any given percentage increase in energy prices will have a greater impact on overall HICP inﬂation than in previous decades. There are several reasons why weak disinﬂation pressures may arise, even in the presence of signiﬁcant changes in economic activity. One of the main reasons is labor market rigidity. According to this article, labor costs account for around 27% of euro area ﬁrms’ total production input costs. Therefore, rigidities in the adjustment of these costs can explain a substantial part of any lack of responsiveness of inﬂation. Labor costs are ultimately determined by the combination of wages and productivity. The growth rate of unit labor costs actually increased until the end of 2008, when economic activity reached its lowest point in the recession, and this, owing to a relatively smaller fall in employment, translated into productivity losses. At first glance, I was a little taken back by all the information that I was reading. But after analyzing the information, I started to understand the European economy and how inflation is manipulated. After reading this article I feel like I have a better grasp on economic rigidity in Europe and how labor is one of the main reasons for this. I feel like this article is important because it shows the causal effects from crude oil prices to goods and services in the economy. I personally enjoyed reading and analyzing this article. 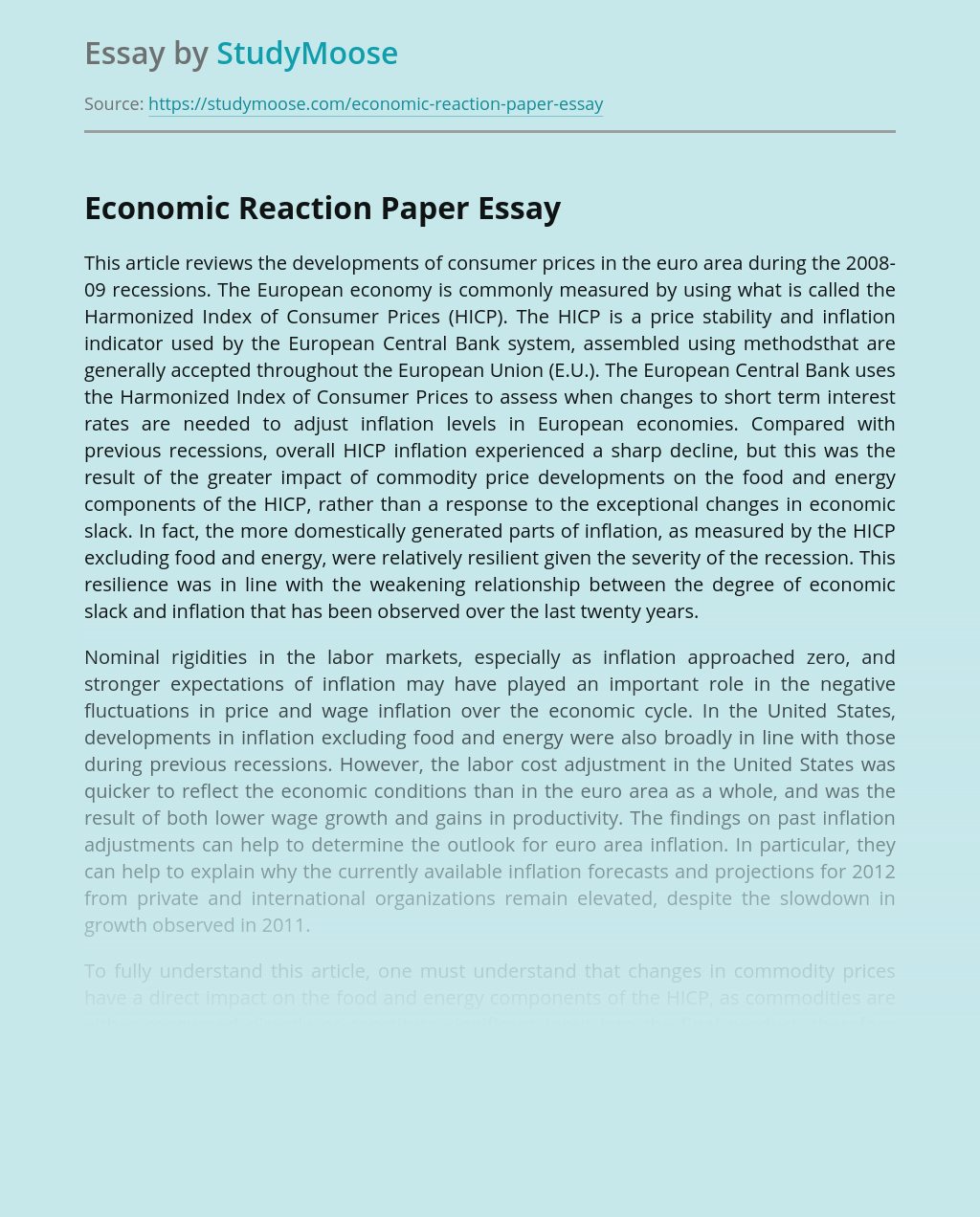