What were the Advantages and Disadvantages of Nazi Rule for the German People up to 1939?

Nazism seemed to end the effects of the great depression.

The German economy had been devastated in 1929 when the great depression happened, but surprisingly, it was looking more prosperous afterwards! In 1938 national income was the highest Germany had seen, which was higher than what Germany had before the great depression by eight billion marks! Although wages had not overtaken the level that wages were at in 1928, industrial and consumer goods were way above the 1928 mark, and employment was almost a million less than what it was in 1928.

Don't use plagiarized sources. Get your custom essay on
“ Economic Policies and Benefits in Nazi Germany ”
Get custom paper
NEW! smart matching with writer

However, this employment figure is quite controversial because the Nazis threw the Jews out of their jobs, replaced them with German people, and did not account for the Jews in the unemployment figure!

Hitler was an excellent figure head. He was what the German people could look up to and support. He was a very determined man. He excelled at making speeches; he could almost ‘brainwash’ his audience.

Although Hitler a dictator, he gave everyone a sense of purpose. Everyone had a role in their life.

The Nazis brought order and stability to the German people. The people were indoctrinated to obeying instructions strictly and adhering to planning. The importance of order and stability was also drilled into the minds of the young at youth movements. These movements gave everyone a sense of identity. Everything in them was done in a military-like environment.

Standards of living increased after the great depression. During the 1930’s, car ownership in Germany trebled. Wages were gradually increasing, unemployment (Jews excepted) was at an all-time low, and there were more industrial and consumer goods than ever!

Numerous worker’s organisations such as the Beauty of Labour and the Strength through Joy offered many benefits. Although they were formed to prevent the formation of trade unions and to restrict freedoms of the worker, they were very successful.

The Nazis introduced a plan known as the Four-Year plan. This was a scheme to increase Germany’s infrastructure, to make Germany self sufficient, and to prepare it for war.

Nazi rule restored Germany’s pride and status as a great power by virtue of its very successful government of the country. It had accomplished and improved many things for the German people. Also, the 1936 Olympic Games in Berlin was used for propaganda purposes – glorifying Nazi rule – and attempting to demonstrate to the rest of the world the physical ‘superiority’ of the ‘master race’.

On the other hand there were many negative aspects as well.

The Nazi legal system was very organised. Germany had become a totalitarian state which meant that the individual was completely under the power of those in authority. The law restricted freedom of expression and censorship increased. Newspaper and magazine agencies were given regular briefings on what to include in their articles. The Nazis were prepared to go quite far to make sure that Hitler and the Nazi party got very good coverage. Only certain types of music were allowed to be broadcast. This lead to the persecution of critics and opponents. The SS and the Gestapo were two security systems organised to ensure that the Nazi policies were enforced and they dealt severely with any opposition.

The law did nothing to protect the individual from the activities of the SS and the Gestapo. In a democracy, there are limits set by the law on power of the government and of the police and the courts were quick to redress any abuse or excesses of power. This was not the case in Germany! Most Germans never came into direct contact with the SS or the Gestapo because they never questioned Hitler’s authority or policies. Those who were brave enough to protest were liable to arrest. Punishments included internment in a concentration camp or execution.

Education was Nazified. The purpose of education under Nazi rule was to create Nazis. Then, there were various and different subjects taught, like ideology, race studies and eugenics! Boys were steered towards an acceptance of war, and girls were prepared for motherhood and housecraft. Another important aspect of school life for German children was that anti-Semitism was taught, and practised, in the classrooms!

Women had a very restricted role in Germany. Their role was to stay home, look after the family, and to raise good Nazis. Many had to give up careers. Girls were brought up knowing what their role in society was. Apparently, the Nazis did not want any women professionals and did not want women in positions of power.

Anti-Semitism was encouraged in magazines and newspapers, posters and radio, and even in the classroom. Anti-Semitism was written into laws. Jews were the subject of violence in race riots and abused at parades. The extent of the prejudice is difficult to appreciate. A baby would not fear a poisonous snake about to bite him, he would probably play with it; just as a child has to be taught to fear a snake, so the German people had to be taught to fear the Jews. This did not work at first because the German people were ignoring the propaganda about the Jews. After a short while, though, it exploded into uncontrollable mass hysteria!

Nazism produced a brief period of financial security for the German people but caused unparalleled misery not only to the Jews of Europe but to the greater part of the whole world. The rise of Nazism resulted the darkest chapter in the history of man! 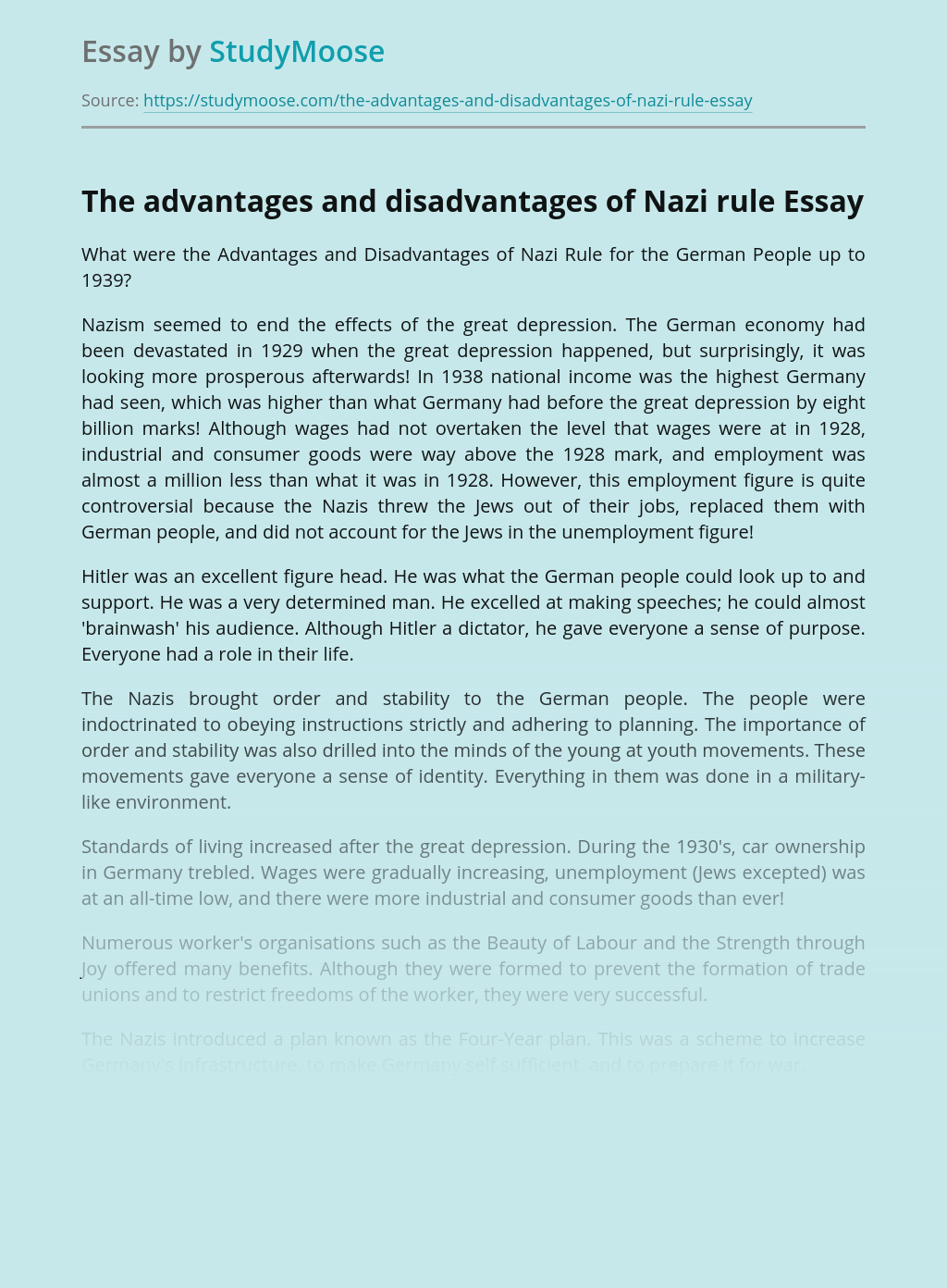