According to statistics released by the Scientific and Environmental Research Institute, quoting government figures, Kolkata had a suspended particulate matter (SPM), the measure of pollution, at a steep 511 compared to Delhi’s 234 and Mumbai’s 322. That earns Kolkata the crown for the most polluted city in the country – a distinction reserved for New Delhi for last few years. Mumbai is the second most polluted city after Kolkata in terms of air pollution. Now Delhi ranks third while among all areas of the country following Chennai at fourth position; Vadodara is the safest city to live in.

Turn in your highest-quality paper
Get a qualified writer to help you with
“ Economic Externalities – Air Pollution in Kolkata ”
Get high-quality paper
NEW! AI matching with writer

The figures above are not merely some figures taken out from some fanciful statistician’s workbook, they mean much more to those who are affected. Kolkata now accounts for more deaths due to lung cancer and heart attack than any other city in the country including the capital city of Delhi, which had the highest level before Kolkata overtook it. More than 18 persons per one lakh people in Kolkata fall victim to lung cancer every year compared to the next highest 13 per one lakh in Delhi, according to environmental scientist and advisor of Chittaranjan National Cancer Institute (CNCI), Twisha Lahiri (1).

The most affected are children; apart from the life threatening diseases mentioned above, many of them suffer from lifelong ailments as such Asthma. People exposed to prolonged periods to this pollution, the roadside hawkers, shop owners, traffic policemen, auto-rickshaw drivers, rickshaw-pullers and others who spend long hours on the road, were the most vulnerable. Like children, they also face very high risk of potentially devastating health consequences of the pollution.

So what causes this negative externality and inefficiency? Why the problem propped up to such a level? What measures can restore the health of such a common property resource like air? Major producers of the air pollution are vehicle operators in Kolkata and adjoining regions. Till December 2008, there were 14 Lakh vehicles registered in the city – among them 9.5 lakh private and 4.5 lakh commercial. Studies show that only 1 in 6 vehicles in the city gets pollution tested; although all of the commercial and private vehicles are supposed to be pollution tested twice a year.

Earlier actions by government to address the issue, such as scrapping of 15 year old commercial vehicles, could not succeed due to stiff resistance from powerful unions and lobbies. Even a court order towards that met an agitation by bus and taxi operators of the city (July 24, 2009). One of their main contentions was that measures to reduce the pollution will actually increase their marginal cost of production (transport service) and less people will avail transport services – causing industry revenue to come down. Economically, however, the output should actually go down. What is happening here is that the vehicle operators are unwilling to recognize the marginal external cost to the residents. If they recognized that then marginal social cost of their product should have gone up (Marginal Social Cost = Marginal Cost + Marginal External Cost) resulting in lowering of the level of output. Thus lowering of the output would have actually been consistent with the laws of economics. Another reason of pollution is the raising number of building construction projects around the city.

The massive high rises and glitzy malls are coming up in a very short period of time. Construction projects are creating fine dust particles that are crowding the air of Kolkata. Surely the pace of so called development is actually causing the air full of silica, which is very harmful for the human lungs. Here also we see that firms (construction companies) producing output at a higher rate than what is socially acceptable. We also witness moral hazard on the part of government officials and industry bodies, who are well acquainted of the pollution issues, who are turning a blind eye to the issue. In many occasions they refuse to recognize the marginal external cost of residents due to this pollution or attribute a lower marginal external cost to the problem. There are other more complex reasons that attributed to the pollution problem. Due to lack of industrialization of the state of West Bengal, the demand for labor has become less (the demand curve shifted left).

Also due to historical reasons such as influx of refugees during partition of India, the supply of labor has always been more than adequate. Due to efficiency wage theory, there has always been some unemployment. Prevalence of unions in the state also made sure that the employment remains less than the point of economic equilibrium. Adding all those, the state and its capital got a very high rate of unemployed population, mainly youth. They constitute the most of the auto rickshaw drivers, the heavily polluting unlicensed street food vendors etc. As the issue of pollution, in this case, is intermingled with the issue of economics that drive employment as well.

While the residents of Kolkata had started to rise up to the issue of pollution almost a decade back, a movement for cleaner environment never really reached a significant level. As air is a non-exclusive public good, majority of the population remained free riders in the hope that small number of environment activists will ensure pollution free air in the city. There also has been a concern that strict measures to curb pollution could raise the transport costs significantly. Kolkata Municipal Corporation faced resistance from not only from construction industry but from common residents when it tried to enforce stricter requirements for construction projects as they feared increase of already skyrocketing property prices due to those requirements. In short, most of the measures proposed for cleaner air were defeated as majority of the city dwellers were not ready to pay price for a cleaner air and wanted to enjoy free riding.

The only hope now rests on the recent court judgments forcing both local government and the polluting industries to take appropriate measures to control pollution. By doing that, judiciary actually recognized the property right of clean air for Kolkata residents. In a landmark high court directive on auto rickshaws, the court has asked the vehicles older than 15 years, which emit 20 times more fumes than new ones, to be withdrawn from the city roads. The court directed that all auto-rickshaws, irrespective of their date of registration, will have to convert to either compressed natural gas (CNG) or liquefied petroleum gas (LPG). These directives might not clean the city’s air immediately, but it is sure to reduce pollution significantly going forward. 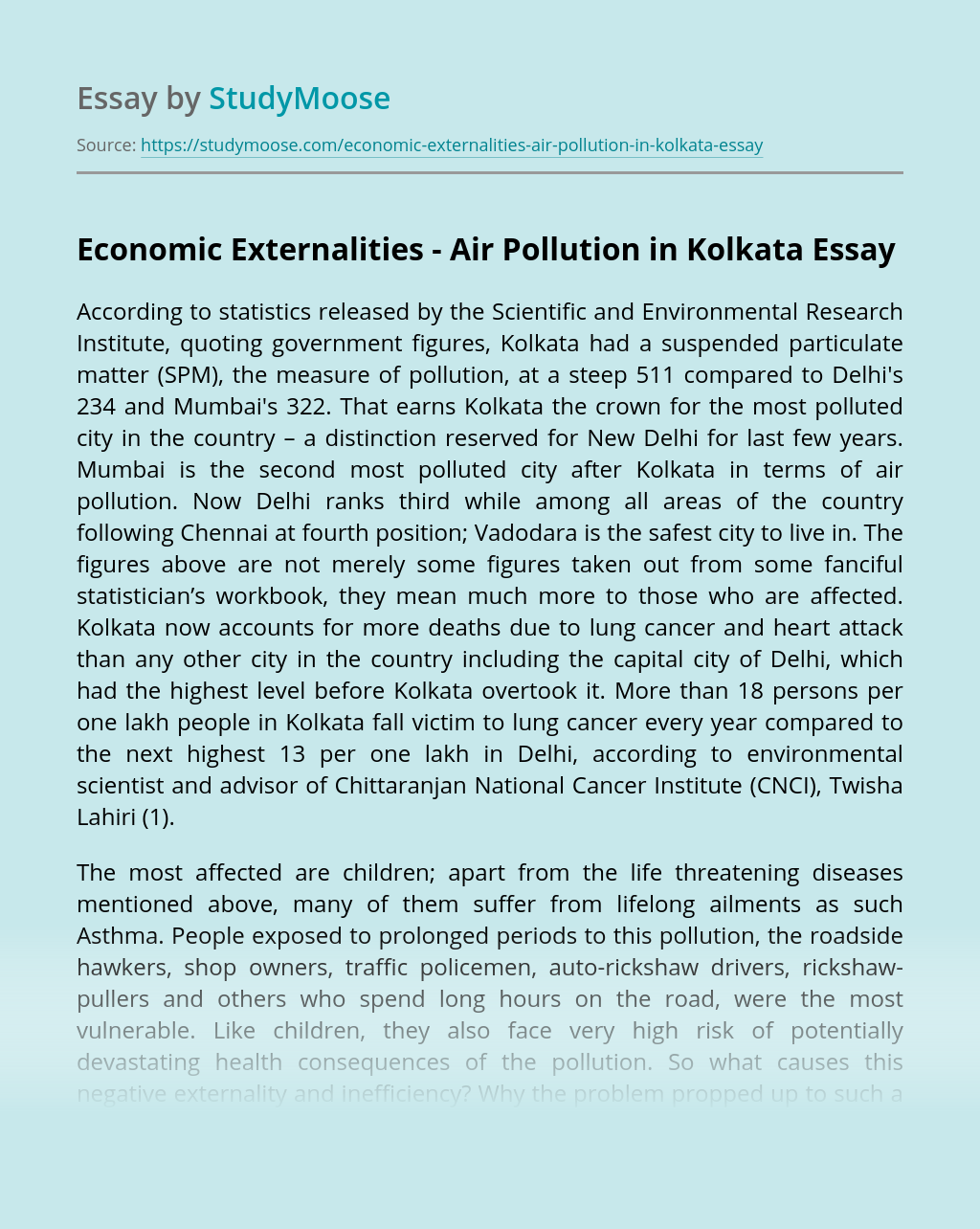 Turn in your highest-quality paper
Get a qualified writer to help you with
“ Economic Externalities – Air Pollution in Kolkata ”
Get high-quality paper
Helping students since 2015
Stay Safe, Stay Original