Many villagers and small town dwellers want a living in big cities. With some expectations, they make a movement from villages to big cities. This migration from rural areas to big cities is called urbanization. There are two kinds of factors why rural people seek for urban life. The first one is urban pull factor. They dream for higher wages, better housing and utilities, better school and hospital, more jobs opportunity, and more experience that they can get it all from a living in big cities as they think.

Don't use plagiarized sources. Get your custom essay on
“ Economic Development in Urban Areas ”
Get custom paper
NEW! smart matching with writer

The second one is urban push factor.

We know that most of rural areas people are farmers. There’s not much else to do anymore in the village but wait for harvest time and without higher level of education, availability of media, or facilities that they need, they might be stimulated to move to urban areas. But after they reached what they called their dreamland, most of them must face more problems than what they had when they lived in villages.

They will face some problems because of their insufficient abilities, experience, education, and skills those are needed for a good living in big cities.

For instance, they can’t provide housing or maybe they can’t find any job. And then they just stranded with the option of staying in cities or coming back home. As the result of urbanization, cities have more problems to overcome such as pollution, overpopulation, drug abuse, congestion, crime, poverty, traffic jam, slum areas, and many more.

There must be something to solve these problems. Government and citizens should be involved because taking care of city problems can’t be done entirely by government. The community can be even more successful because it deals directly with problem areas.

As the solution to solve those problems government can provide housing, create a new regulation transmigration program, provide skills training program, or start to develop in rural areas. Beside that, citizens can help to succeed government’s programs with giving charity, offering some good job to jobless people, becoming foster parents who subsidize the education fee for underprivileged children, or offering a low cost housing for homeless people. Last of all, urbanization not only impacts a better future than living in a village, but also worse.

Villagers must consider about their ability to deal with a living in problem-ridden city before they intend to move to big cities. Economic change has helped lead America into urban crisis for the following reasons. First of all, because urban problems are no longer confined to the inner city, but are regional in nature. The federal government has, also, largely drawn from the urban policy arena, thereby having cities and sates to develop their own solutions to local problems. Furthermore, the economy of cities is no longer organized around a central business district, but is dispersed throughout a metropolitan region.

Next, the national economy has experienced a fundamental reorganization and many cities have experienced the direct effects of deindustrialization and disinvestments. Additionally, the fiscal crisis within the public sector is unprecedented and has seriously negative effects for the provision of services at all levels of government. Finally, the nature of work itself has changed within cities as more women enter the labor market; the changing nature of work has affected the urban family in many ways, many of which have direct ramifications for social welfare and family policies.

There is a great amount of inequality of income in some cities. Most of those who fall bellow the poverty line is African Americans and Hispanics. This is because they are placed in low paying jobs. As more and more people immigrate into the country, there are less and less jobs to go around. This creates a larger poverty gap. People just coming here to America are placed in very low-income jobs. This is all they can get if they don’t speak any English. For example, here at Rider the cleaning people are all Spanish. They don’t speak any English, and their job is to be the cleaning crew.

These are the only types of jobs that these people can get most of the time, and this makes our percentage of people who are in poverty go up. Another problem that is contributing to the urban crisis is the rise of single-parent families and ‘present-orientated’ values. The problem here is that the divorce rate in America is getting higher and higher, and also the amount of children being had out of marriage is greatly increasing also. This creates one parent raising a child. The problem here is that there is no proper care for children in this situation.

The parent has too much responsibility. They are to provide for the family, as well as adequately care for their children. When the single parent has to go to work, to get money to pay for a place to live, food, and clothing, there leaves no time to watch and take care of the children, meaning children are left to take care of themselves after school is over and this result in a lot of problems for the communities. These children cause trouble. They are the ones who commit most crimes in an urban environment. This is why in an urban city there is a lot more crime.

There are a lot of children left unsupervised for most of the day and night. Another problem is the ethnic tensions that there are in America. There are many things that are wrong with this. The first problem is that because of racism, people are secluded. They are pushed to all live together, because people don’t want to live next to them. This is how a ghetto is started, and slums. All the people of low incomes live in the same neighborhood together. They also contain the high crime rates because these are the people who are also of single parent families and their children are left unsupervised.

Another problem with racism is that people are given lower paying jobs because of their race, and also, they aren’t able to have to same amount of experience as other people. They don’t go to as good of schools, and they then might not be able to go to college, so they are stuck. They can only get a low paying job. This creates families to be stuck in poverty for generations, they can never get out, unless with government assistance of some sort. Then this makes the inner cities all full of low-income families, and creates a poverty stricken area that cannot be fixed in any way.

If there were more integration within neighborhoods, then we wouldn’t have these areas. Another reason why urban America is in crisis is because of the underground urban economy. This also causes a lot of crime in urban cities. The people in these cities who are poor, and are trying to find a way out, usually try by doing something illegal. A big example of this is drug sale. People start selling drugs to get money. This creates a lot of problems. The selling of illegal materials results in murders, and robberies, to either get the drugs, pay for the drugs, or avoid getting caught selling them.

Another example of this is people stealing things, like car parts, and selling it on the black market. All of these illegal acts always result in something that makes the cities look worse and worse to live in. I know that when I go into Little Rock I am really afraid, because I know that there is a really high amount of crime there, and I am always thinking that someone is going to try to shoot me for my car, rob a store that I am in, or something else. Stereotypes of cities are easily created, and this doesn’t help the situation. Also, the advancement in technology has lead many people to be left without jobs.

This technology had created more unskilled labor, and putted skilled labor to a minimum. People, who had been specialists at doing certain skilled work, are constantly being replaced by machines that can do the same work faster and cheaper. This creates a huge economy gap. It makes the rich get richer and the poor get poorer, by giving all the money from the profit of sales to the company owners, rather than to employees. So, the people who were already well off, have even more money, and those people who were middle class citizens are now jobless, and can not afford to take care of their families.

The problem here is obvious, the more jobs that are lost because people are replaced by machines, the greater the amount of people who become in poverty. The numbers keep increasing. The UNFPA report we are launching today is of great importance and very timely: “unleashing the potential of urban growth”, as the report’s subtitle indicates, represents the greatest challenge of this century. The diagnosis made in the report is beyond dispute: urbanization is inevitable, but it can also be positive. Furthermore, the report focuses on poverty since it is poor people who will make up a large part of future growth.

The report also focuses on the situation of women and young people. Projections suggest that in 2030, 60% of the population will be less than 18 years old. This is a very explosive situation if prevailing development models continue to exclude young people. My own research in various African capitals indicates a clear deterioration in the situation of young people, particularly with respect to access to paid employment. Younger people are taking more time than previous generations to find work and more often find themselves in precarious jobs in the informal sector.

A society that does not provide challenging opportunities to its youth is a failed society. The situation is already catastrophic in the cities of the poor regions of the world and it is obvious that young people will not accept being excluded or marginalized. They will resort to alternative means, including violence, to challenge a world that leaves them so little space. I would suggest that this is urbanization’s greatest challenge is giving young people access to decent jobs that match their aspirations. In short, we must recognize the great merit of this report, which identifies the real problems and makes an extremely valid diagnosis. 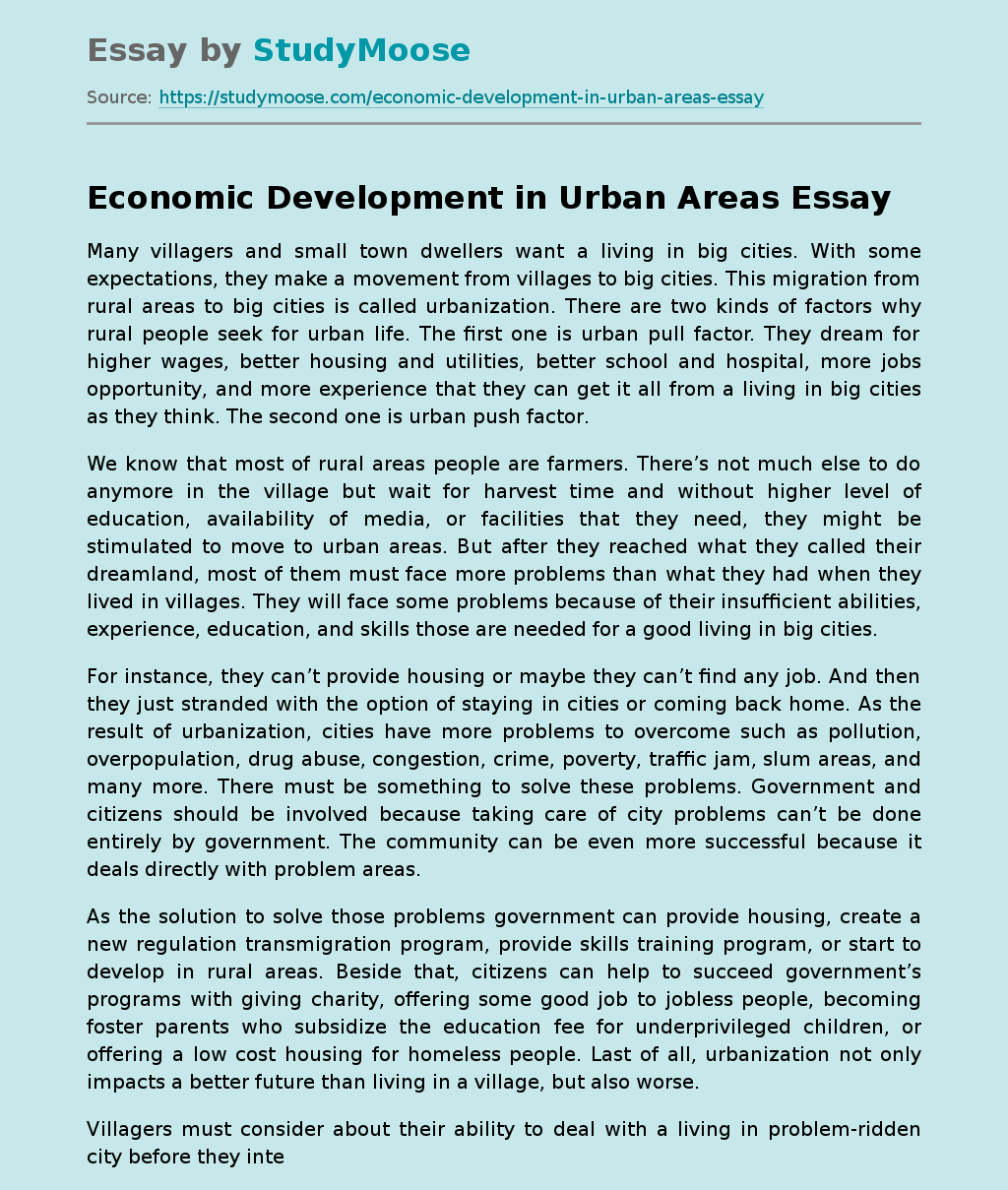