The process in which a society or country (or world) transforms itself from a primarily agricultural society into one based on the manufacturing of goods and services. Individual manual labor is often replaced by mechanized mass production and craftsmen are replaced by assembly lines. Characteristics of industrialization include the use of technological innovation to solve problems as opposed to superstition or dependency upon conditions outside human control such as the weather, as well as more efficient division of labor and economic growth.

Industrialization is most commonly associated with the European Industrial Revolution of the late eighteenth and early nineteenth centuries. The onset of the second World War also led to a great deal of industrialization which resulted in the growth and development of large urban centers and as well as suburbs. Industrialization is an outgrowth of capitalism.

Before India was introduced to the industrialization or the industrial revolution, india was largely an agricultural country. Before the british invasion India became famous for her handicrafts and textiles too.

During the Mughal Period, India had a considerable variety of arts and handicrafts and the products commanded wide range of foreign markets. At that time no other country produced products that could be imported to India in exchange for cotton and silk goods which were in world-wide demand.

Europe had to pay in billions for the increasing volume of Indian exports. India was also famous for jewelry of exquisite quality made out of gold, silver, copper, brass and bell-metal.Many urban centers were famous for carving work in ivory, wood, stone and marble.

In bigger towns each handicraft was organized into a guild which safeguarded the professional interest of its members. The emergence of modern industrial enterprises can be traced back to the end of the 18th century. The new industrial activity took two forms, plantations and factory industries. Real and satisfactory progress in the factory industries began only after 1875. During the next two decades, two textile units – cotton and jute- flourished.

Initially, India’s domestic economy depended mostly on the agriculture. Globally, its textile and jewelry industry were very famous, but since all the industries were fully controlled by man, the speed of the produce could not match the growing demands of foreign merchants. Then began the industrial revolution in india, which was introduced by the british. The use of machines in the industries brought about great progress and economical growth to the country. One of the main reasons why India is a member of the BRICS nations[->0] and is tipped to be the next global superpower is its rapid pace of industrialization. India’s industrial growth was recorded in 2010 at 16.8%, highest in 20 years. Thus it has a major contribution to India’s economic growth rate in 2010-2011 which is measured at about an impressive 8.6%. The rate of investment in India has been found to have exceeded 36% of the country’s GDP and this has happened because India is making progress in the industrial sector by leaps and bounds.

On the technology front, the biggest advancements were in steam power. New fuels such as coal and petroleum, were incorporated into new steam engines. This revolutionized many industries including textiles and manufacturing. Also, a new communication medium was invented called the telegraph. This made communicating across the ocean much faster. But, along with this great leap in technology, there was an overall downfall in the socioeconomic and cultural situation of the people. Growth of cities were one of the major consequences of the Industrial Revolution. Many people, who initially practiced agriculture, were imposed on with heavy taxes and unable to pay taxes to the british officers were forced to move to the cities. With the new industrial age, a new qauntitative and materialistic view of the world took place. This caused the need for people to consume as much as they could. This still happens today. The negative impact of industrial revolution on india is due to two major factors.

Industrialization plays a significant role in the process of economic development. The examples of developed countries indicate that there is a direct relationship between high level of income and industrial development. Industrialization has its own merits as well demerits. The merits are –job creation, development in science and technology,better infrastructure, better healthcare, more amenities and comfort to the masses, more affluence, better educational levels of the masses, good help to agricultural sector in terms of farm equipments, tractors, irrigation tools,pesticides, fertilizers so the country can achieve self sufficiency in food grains.

The less developed countries are generally primary producers and import industrial output. With industrialization of their own economy they need not import industrial product from outside and this helps in reducing the trade gap. The question that now arises is “Is india a developed country?” The answer lies within, whether india is a primary producer or has a industrial economy. In fact, India has a balance of both kinds of economy because agriculture forms a major part of india’s occupation, which is primary produce but, of late, many industries are spreading from cities to villages like wildfire hence, increasing the industrial economy.

India is actually developing at a very fast rate in the industrial sector, and at this rate of progress, India is estimated to be a developed superpower. Looking at India’s GDP, India is already a well developed nation, but the lack of well-maintained infrastructure and unorganized roads has prevented it from being titled as a ‘developed nation’. Industrialization also helps in satisfying a variety of demands of the consumer’s. With modernization of the economy the demand for industrial product has increased considerably. Industrialization brings a change in the socio-cultural environment of the economy. It makes people dynamic, hard-working, mobile, skillful, efficient, and punctual. It brings a change in the way-of life of the people and makes people more commercial. It also provides security to the economy by making it self-dependent.

India has seen a rapid rise in industrialization in the past few decades, due its expansion in markets such as pharmaceuticals, bio-engineering, nuclear technology, informatics and technology-oriented higher education. These latest trends have made India more globally-minded as their desire to trade with the world increases.

It is said that India has deliberately targeted markets they know they can make instant in-roads into. Industries such as pharmaceuticals and bio-engineering have been seen as ideal in increasing the national income using the country’s new-found expertise. Also, India now exports a whole variety of products and knowledge, including petroleum products, textile goods, jewelry, software, engineering goods, chemicals, and leather merchandise.

There are a lot of comparisons drawn between India’s industrialization model and that of China. Both countries have realized the importance of the export market and how to capitalize on their huge workforces – allowing them to become leading powers in the global market on several fronts. Western countries look favorably to countries such as India and China due to their low production costs in comparison to European and US prices; again a favorable characteristic allowing the countries to build their economies.

The industrialization of India looks set to continue for some time and the result could well be that India becomes a major player in many global markets in the future.

1. Raising Income: The first important role is that industrial development provide a secure basis for a rapid growth of income. 2. Changing the Structure of the Economy: In order to develop the economy underdeveloped countries need structural change through industrialization. History shows that in the process of becoming developed economy the share of the industrial sector should rise and that of the agricultural sector decline. This is only possible through deliberate industrialization. As a result, the benefits of industrialization will ‘trickle down’ to the other sectors of the economy in the form of the development of agricultural and service sectors leading to the rise in employment, output and income.

3. Meeting High-Income Demands: Beyond certain limits, the demands of the people are usually for industrial products alone. After having met the needs of food, income of the people are spent mostly on manufactured goods. This means the income-elasticity of demand for the manufactured goods is high and that of agricultural products is low. To meet these demands and increase the economy’s output underdeveloped countries need industrialization.

Industrialization provides increased employment opportunities in small and large scale industries. In an agrarian economy, industry absorbs underemployed and unemployed workers of agricultural sector and thereby increases the income of the community.

5. Stimulates progress in other sectors. Industrialization stimulates progress in other sectors of the economy. A developments of one industry leads to the development and expansion of other industries. For instance the construction of a transistor radio plant, develops the small battery industry (backward linkage). The construction of milk processing plants adds to its line of production ice cream. cone cream plants etc.. (forward linkage). 8. Rise in agricultural production.

Industrialization provides machinery like tractors thrashers harvesters, bulldozers, transport, aerial spray etc, to be used in the farm sector. The increased use of modern inputs has increased the yield of crops per hectare. The increase in the income of the farmers has given boost to economic development in the country. 16. Increase in the Government revenue.

Industrialization increase the supply of goods both for internal and external markets. The export of goods provides foreign exchange. The customs excise duties and other taxes levied on the production of goods increase the revenue of the State. The income tax received from the industrialists adds to the revenue stream of the Government which eventually is spent for the welfare of the people as a whole. 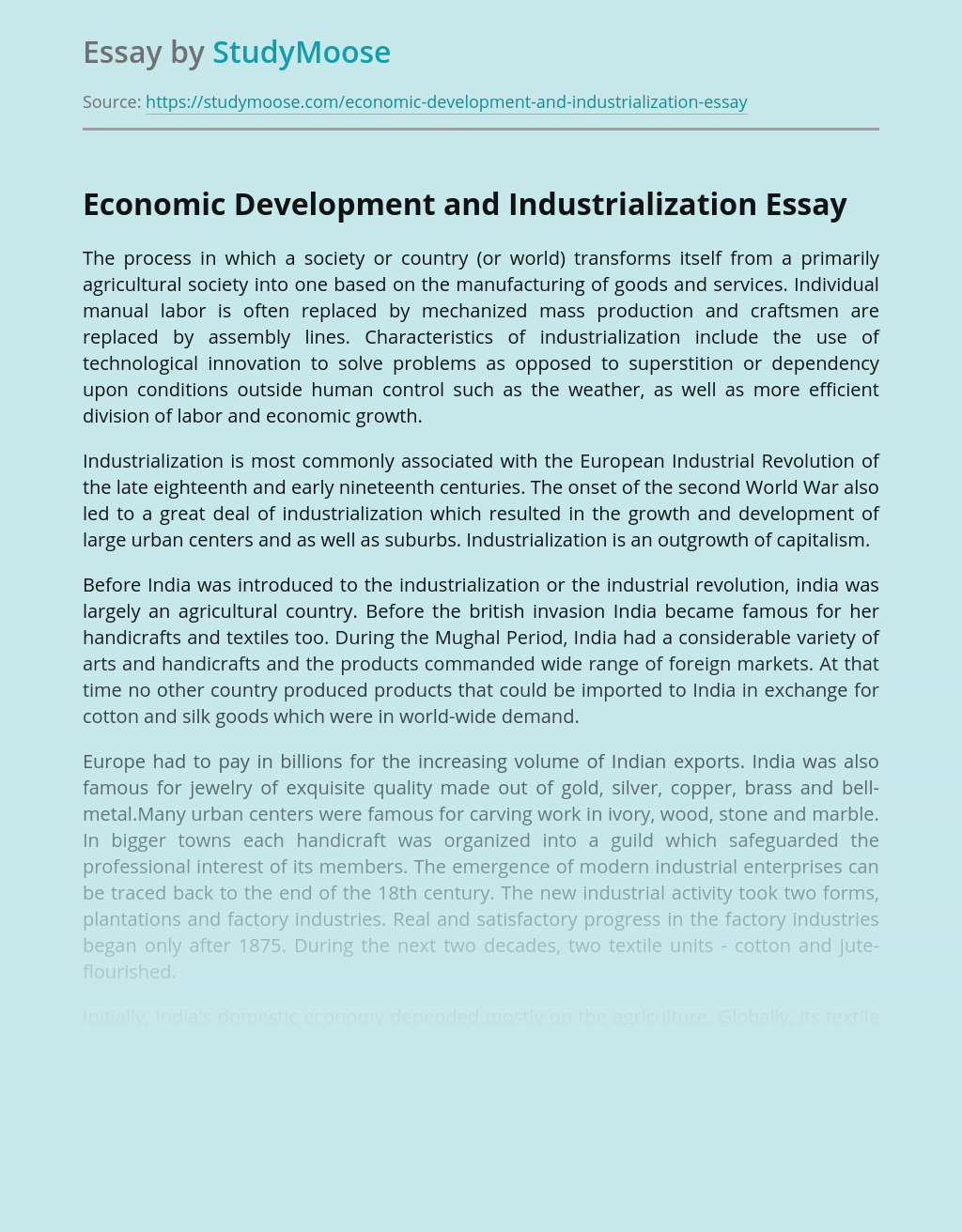 Don’t waste time
Get a verified writer to help you with Economic Development and Industrialization
Hire verified writer
$35.80 for a 2-page paper
Stay Safe, Stay Original