We hear a voice over, which we presume to be Dracula because of the deep, Eastern European accent. We presume that what Dracula is saying, is what is in the letter Jonathan takes out and opens. The letter is sealed with blood red wax seal. On the right hand side of the screen, an eye can clearly be seen in the sky. This is reminiscent of the eyes we have seen earlier in this scene giving the audience the impression that Jonathan is being watched on his journey by something un-natural.

Don't use plagiarized sources. Get your custom essay on
“ “Dracula” by Sir Abraham «Bram» Stoker ”
Get custom paper
NEW! smart matching with writer

During this scene Jonathan is unaware that he is in danger and doesn’t suspect anything so we get the impression that Jonathan is vulnerable.

The letter from Jonathan’s eyes

Then we see a close up/high angle shot of the letter from Jonathan’s eyes. It is an insert shot because it shows the importance of the letter. We can also hear very heavy breathing.

This could make the audience feel like Dracula is over Jonathan’s shoulder watching him; this gives us the impression that Jonathan is being stalked by an un-natural being. In the shot an eye can be seen but it is not like the eye that could be seen out of the train window. The eye is more like an eye of a reptile or even a bat. The director could have done this to make Dracula seem not like any human.

The writing in the letter is very old fashioned, again typical of Victorian times.

Then we see a close up/low angle shot of Jonathan in which he looks very sinister. This is a reaction shot because we see the concentration on Jonathan’s face. At the end of the letter is an insert shot of a ‘D’ highlighted again by the mysterious eye shape. This is very ambiguous as Dracula could be giving us the impression that he does not want to give too much away about his identity so the audience know something s not right about his journey. Jonathan takes out a traditional black and white photo of Mina and looks at it.

Jonathan’s face can be seen reflected in the picture. When he is looking at the photograph we hear the same melodious music that we heard when Jonathan and Mina were in the garden at the beginning of the clip. We can also hear Mina reading from what we presume is her diary. Mina speaks directly after Dracula and the director may have to chosen to do this to show a possible link between them, the scene becomes brighter, suggesting safety but the orange sky is still present suggesting Dracula is still there watching Jonathan the whole time.

Again we see Mina wearing a brown plain dress. The director chose to put her in these clothes to show that she is depressed because Jonathan was sent away and that she is lonely. In the background is a window and from the window we can see that it is raining. If the director had made the weather outside sunny and warm, then the scene would not be as effective because the weather makes the scene look glum. In the room is an old fashioned typewriter, which Mina is using. The room is cluttered with everyday objects and is very dark.

Mina picks up a frame with a photograph of Jonathan in it. At the bottom of the frame you can see Mina’s hand. She is clutching the frame very tightly this could be seen as a metaphor, that Mina doesn’t want to let Jonathan go. Then we go back to what we presume is Jonathan because we see a very dark scene with a horse and carriage moving across the screen. Although the scene has changed completely, we can still hear the soft music and then hear Mina’s voice say, “It must be so nice to see strange countries. I wonder if we, I mean Jonathan and I, will ever see them together? ”

When Mina corrects herself at the end of the sentence it makes the audience believe that there could be somebody else and because of what the audience knows about the film, we presume this to be Dracula so the audience know something is wrong. The coach is moving left to right across the screen and then we see a medium shot low angle shot of the driver. He is wrapped up very warm in a fur coat and this shows that the area is very cold and harsh. A flash of lightning lights up the screen and the lightning looks like a claw as it creates an eerie glow. The horses are moving towards the camera and the only real light is from the carriage.

While this is happening, we can hear sounds of horses, which get louder to show us that the horses are moving towards us. Then through the howling wind, we hear the driver shout, “Hail” and the horses stop. We hear a squeak and presume it is the door opening. The next shot is a close up straight angle shot of Jonathan leaving the carriage but he has a blue light on the side of his face. He then says, “We’re early driver no one is here” As he moves away from the carriage, a lady stops him. We see the lady with an over the shoulder shot and she lady looks like a gypsy. 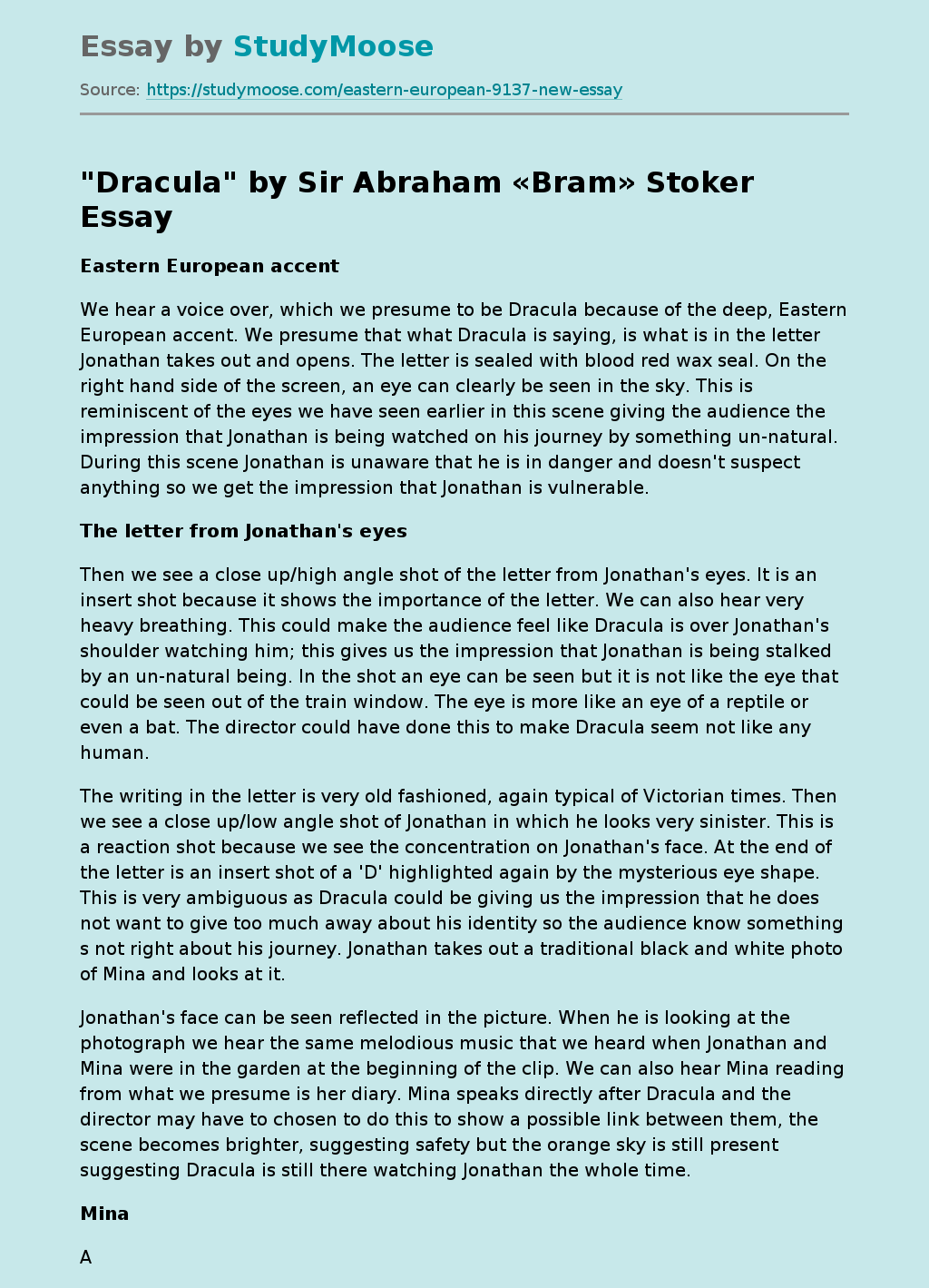