The Korean culture on the other hand uses indirect communication which makes it hard for western cultures to understand what is really meant or wanted. In addition, the Confucianism in the Korean culture teaches to show respect for teachers and superiors. Showing respect to a teacher/superior implies to not ask questions to avoid offending the speaker by implying that the teaching is not well done and that the group cannot follow the subject taught. In this case the cultural behavior of the Korean consultants is causing major problems.

Don't use plagiarized sources. Get your custom essay on
“ East Lifestyle “Ellen Moore: Living and Working in Korea” ”
Get custom paper
NEW! smart matching with writer

Since the knowledge of the Korean consultants is by ar not as enhanced as the knowledge of the American counterparts, Scott is trying to give the consultants instructions how to tackle certain problems and how to structure the project, but is not able to confirm if these instructions were understood or if more explanations are needed. In addition, this cultural behavior is reducing the consultants’ ability to openly communicate with their superiors such as Scott, Ellen, Jack and the client and speak freely about concerns, questions or better solutions they might have.

Another communication barrier can be recognized in regards to gender.

In Confucianism the male-female relationship is equal to superior-subordinate relationship. This causes major tension in the communication between Ellen and Jack since his norms and values might have led him to devalue the authority of Ellen’s input. This might explain why he is holding meetings without inviting Ellen and his refusal to use Ellen’s memo she prepared detailing the progress during her absence.

Missing language skills is the third major communication barrier in this case which becomes very apparent at the dinner when Jack makes a very passive-aggressive speech in Korean. When the translator stops translating (Jack told her so), Ellen is confronted with not only the language barrier, but also with the cultural barrier of the superior-subordinate relationship and has to confront Jack and tell him to speak in English in order to keep the threats against the translator minimal and to ensure that she can understand the speech going forward.

Another challenge this team is facing is an unclear leadership and direction which is causing interruptions in the decision making process. The misalignment between Jack’s and Ellen’s instructions causes inconsistencies and insecurities in the team. The Korean consultants are not sure which orders to follow and due to the cultural familiarity with Jack and the high power distance in the Korean work culture, they are ignoring Ellen’s instructions. The decision making process is further slowed down by major cultural difference in regards how and how quickly project related decisions are made.

The American culture is known for quick decision-making whereas the Korean culture has a very high uncertainty-avoidance. This risk avoidant culture is driving Jack’s decision to conduct further market research even if that is outside of the scope of the companies deliverables. Since Korea is a collectivist society in which group decisions are valued, his unilateral decision in regards to the market research suggests that he does not view Ellen as part of the group. The differing attitudes toward hierarchy and authority make it very hard for the American consultants to gage what the knowledge of the team is and how much is really understood.

The American culture has a very low-power distance compared to the high-power distance work culture of Korean’s. This is minimizing the knowledge and idea exchange which is very critical especially in consulting projects. Another major challenge is the missing group development. The Five Stage Model describes the first of these stages as the forming stage where team members get a feeling of how they fit into the team and what their responsibilities and tasks will be. Due to the constant disagreements and power struggles between Ellen and Jack, the group building process is majorly interrupted.

No trust can be built between the team members and the leaders and will eventually cause the failure of the project. The last challenge is the low emotional and cultural intelligence in the group (EQ and CQ). In order for all members of the group to feel comfortable around the other members of the team, trust has to be developed and a sense of group identity and group efficacy has to be established. This would convey the efficiency and productivity of the team and the awareness of cultural differences.

In this case, Ellen destroys the chance to get closer to an integrated group when she interrupts Jack during a meeting and makes him “lose his face” in front of his subordinates. In the Korean culture this is a huge sign of disrespect and she will be not able to regain trust or authority without any intervention from the management team. Q2: The 1st alternative would be to remove either Jack or Ellen from the team. Ellen’s removal would appease the Korean hierarchy and would give the team a unified leadership under Jack.

Nevertheless, removing Ellen from the team would challenge the successful completion of the project since her expertise and experience is needed. Even if a suitable replacement for Ellen could be found, the person would need time to get up to speed and additional expenses would be occurred for the relocation package of the new person and a severance payment or relocation package for Ellen who would need to move to another project which most probably would be in a different country. This could possibly damage Andrew’s leadership and reputation.

On the other hand, removing Jack from the project team would not be received well by the Korean consultants and the management team and the cultural differences would increasingly prohibit the project from succeeding. The 2nd alternative would be to keep status quo and leave the team as it is and let the situation take care of itself. The assumption here would be that Ellen has adjusted to different cultures in prior assignments and might be the best person to get the team back on track.

The advantage of this solution would be that no initial cost is required and everybody continues in their role without major interruptions. The drawback with this solution is that this alternative is very risky. The team has already reached a point where action needs to be taken. The work environment and the tension between Ellen and Jack did not improve over the last weeks and additional resources will be needed to keep the project on track. The ultimate alternative in this case is to restructure and redefine the team. Ellen should be the sole team leader in regards to tasks, deadlines and milestones.

Jack should be assigned to a specialized role on the consulting team, so that on the one hand his technical expertise is still available if needed, but on the other hand his control as a leader is decreased significantly, so he cannot interfere with the work flow of the team anymore. In order to make the restructuring of the team successful, Ellen should address the above mentioned challenges one by one, to ensure the highest possible success rate. In order to address the communication issue and the high-power distance work environment, she should establish an nvironment, where team members can anonymously state their opinion, ask questions or introduce new solutions to problems the team is currently facing. This could be established by creating an anonymous drop box (physically or digitally) which would be read daily by Ellen and topics submitted would be discussed during the meetings. For certain specialized tasks, subgroups should be created to make sure the high-power distance work environment can be decreased and different viewpoints and ideas can arise from free discussions.

This solution will improve team functionality and eliminate time lost on tasks not related to the project, preventing further delays. Furthermore Ellen would need to make the team aware of the cultural differences and try to make the team find common solutions which are acceptable to everybody (Adaption). Commonly agreed on procedures for office behavior or approval processes will make it easier for the employees to follow rules and to work efficiently. Team building sessions will be required to brainstorm team values, individual roles and decision making processes.

This will eliminate the disconnect between leadership and subordinates while accelerating the group development. The demotion of Jack out of a management position will be potentially damaging to his reputation but will be counteracted by his new role as a specialized consultant with technical experience. The additional costs associated with the recommended solution are minimal. Nevertheless, gaining the buy-in of the Korean management team will be difficult. If the proposed solution does not work due to the missing of the Korean management team, Andrew would need to assume this position by himself. 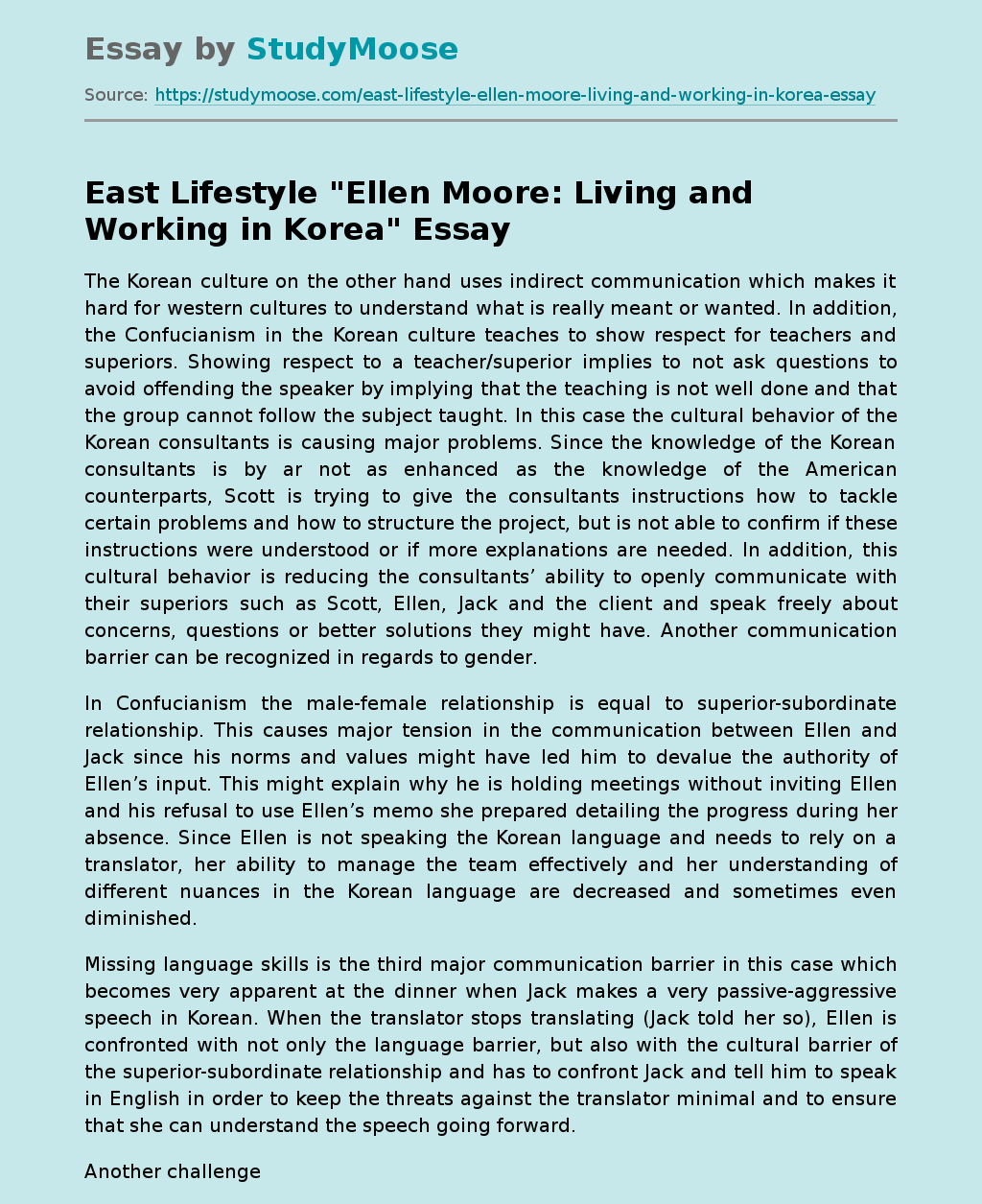