Earth Is Being Harmed by Human Activity

Earth is being harmed by human activity. Humans already made the earth being damaged and it is because of their own activity. In this essay I will describe how people can damaged the earth in more specific like in environment problems. Humans are responsible for taking what they believe is theirs and finding ways to destroy it. Human activity is a behavior or the way that people doing in this environment in a good or bad ways.

Don't use plagiarized sources.
Get Your Custom Essay on Earth Is Being Harmed by Human Activity Just from $13,9/Page

There are two topics of my essay that will support my opinion to agree with the topic which is earth is being harmed by human activity.

There are pollution, and excessive logging. These three topics will contain specific example which are will connected with the human activity. “Pollution is the introduction of a contaminant into the environment”(2013). It is created mostly by human actions, but can also be a result of natural disaster. Pollutions have a huge effect on any living organism in an environment, making it virtually impossible to sustain life.

There are so many human activities that accidentally or not already made the earth became damaged. And one of them is pollution, pollution is one of the big problem that we face now.

There are three pollutions such as, air pollution, water pollution, and land pollution. Air pollution became the most famous issue in the world right now. “Air pollution is the accumulation of hazardous substance into the atmosphere that danger human life and other living matter”(2013). The simple example from human activity that accidentally we made or not of air pollution are when we drive car and the car will release the emission. One more is tobacco smoke, believe it or not smokers have a big role in air pollution.

It contains the most dangerous element of air pollution for health. Fact of cigarettes “Cigarette smoke produces 10 times more air pollutions than diesel car exhaust”(2004). Surely all of these problems started from human activity and make a big impact for all human being in the world. The other examples again from air pollution are acid rains, aerosol sprays, manufacturing building, paint fumes, etc. The second is water pollution, “ Water pollution is the introduction of chemical, biological and physical matter into large bodies of water that degrade the quality of life ” (2004).

A few facts of water pollution are “Over 73 different kinds of pesticides have been found in the groundwater that we eventually use to drink” (2004). And in my opinion, this issue is very clear to describe how big damaged that our earth got from human activity. We can’t blame anybody in this case but at least we should realize and try to think how to react and do after we know about this one. One simple example from me are try to use non-toxic material and avoid using pesticides that can run off into water systems.

And the last one is land pollution, which is maybe we don’t notice at all but have the big impact on us. One fact from land pollution is “We throw away enough trash every day to fill 63. 000 garbage trucks” (2004). If we realize earlier that how big impact that have we done in this earth maybe we can handle this one and decide a solution to save our earth from our activity. The second topic is excessive logging. Nowadays many people never think before they want to cut down the trees. They just cut the trees without thinking how big affect that will they get after they cut the trees to excessive or over.

Some people just think in an economical thinking like they will cut almost all of trees and not thinking how many trees they still keep for the future. Actually that is really really a bad thinking, we should think in an environmental way as well. We can’t live the life in the future if we don’t think about it from now. “Excessive logging is one of the big issues that we should think after pollution”(1991). Actually we just need a good paradigm to think about this problem and how can we solve this problem. One of many example that we can learn from this case is try to limit the demand and supply.

Maybe it will have another reaction in the economic, but we should think in environment way as well. For example, some company should limit their logging and maybe increase the cost of the wood so it will decrease the demand supply wood from the consumer. In my opinion this problem will make a complicated situation which is will make another problem but so far if we can handle it together and think about this one slowly, for sure we can solve this one clearly. And in the conclusion, The earth is being harmed or damaged by human activity is genuinely right for me. Many examples that I told and spread in this essay.

And actually we should solve this problem first before we solve the others. And because all of these pollutions came from human activity we should fight and find the solution before too late. Excessive logging also have a big role beside the pollutions, maybe trees still growing but we never think that human activity is too expose the resources and never think what will happen in the future if we are to expose or excessive logging. Because we made the problems first and definitely we should find the solution for our best future. “Human activity should be reduce, and limit the demand to make environment sustainably” (2002).

Earth Is Being Harmed by Human Activity. (2016, Nov 21). Retrieved from https://studymoose.com/earth-is-being-harmed-by-human-activity-essay 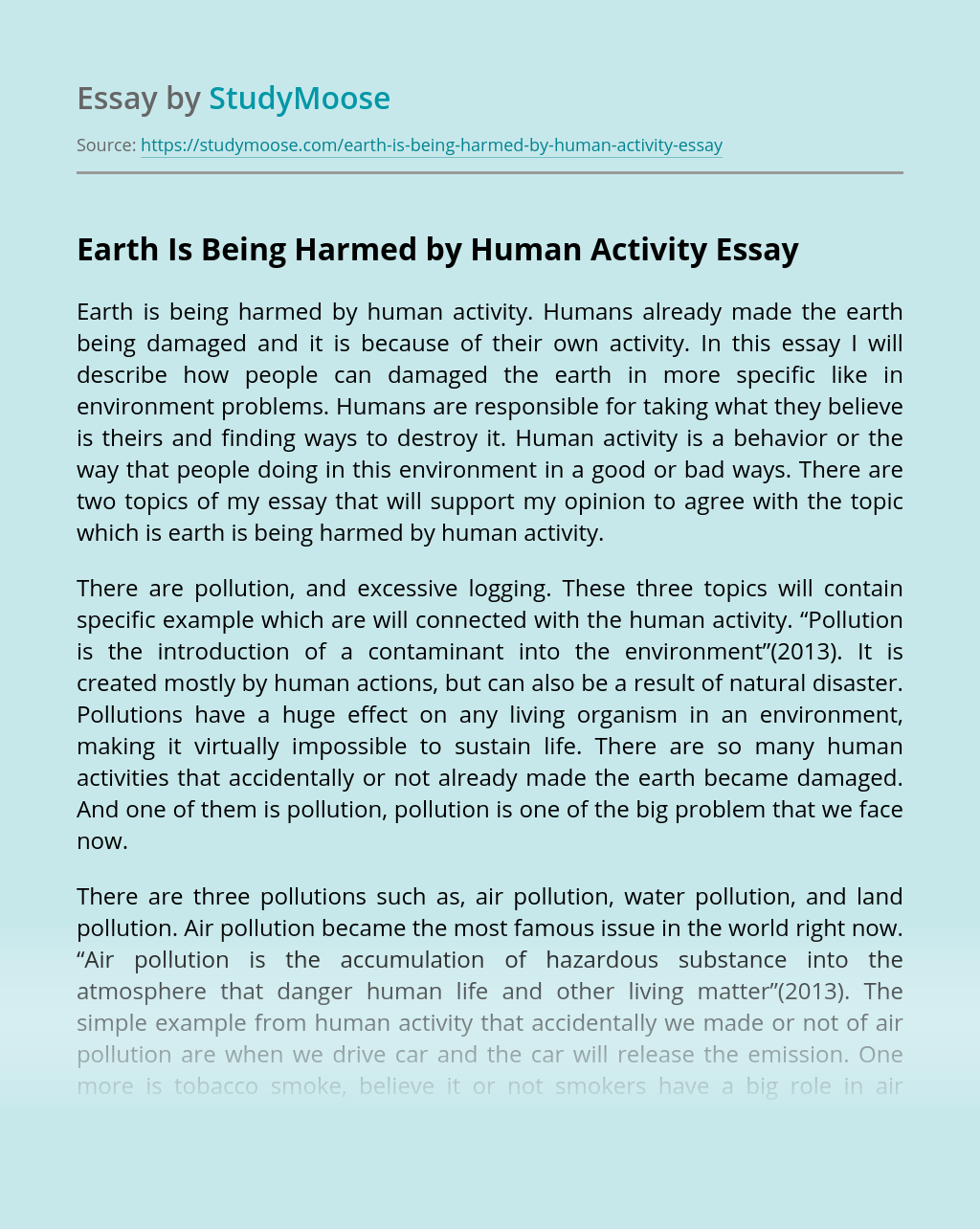 Rate this post An American vice president, Al Gore, said that while the reason behind dinosaurs’ extinction over 65 million years ago was because of a giant asteroid, the species that are dying out every minute of our lives are not just because of some havocs, but it is US-human (Al Gore, 2006, internet). We...

What is a satellite?

Rate this post A satellite is a small thing orbiting or circling a larger thing. The complete path it follows is called an orbit. The moon is a example of a natural satellite of the earth. Manmade, or artificial satellites are placed into orbit by rockets or space shuttles. After World War II, the former...

Get Essay
The human cost of an illiterate society: Jonathan Kozol

Rate this post In the short story “Girl” by Jamaica Kincaid the author gives a perspective of the relationship between a strict mother and her young daughter. Jamaica Kincaid wrote series of sentences that sets the tone of the story to be uptight, oppressive, and informative. The author described her daughter into becoming a ‘slut’...

Rate this post In the book Ishmael, Daniel Quinn argues claims about our culture and beliefs through Ishmael, the gorilla. He somewhat effectively argues his claim, I say somewhat because he doesn’t adequately use all three parts of an argument: ethos, pathos and logos. Quinn’s intended audience is very clearly every Taker/human that is living...

Rate this post Another strength of mine is knowing my audience. When reading to say an older crowd they probably wouldn’t like a lot of loud sound effects like a fire truck or a police car. When reading to a younger crowd say for example “the car came to a screeching holt” making a sound...

Ever since the accelerated development of human civilization

Rate this post Ever since the accelerated development of human civilization, perpetual scientific discovery of nature has accompanied humankind all along the journey. If we have ever paid attention to the necessities of our lives, we would be very much likely to see that from the smallest molecule to the most important issues of the...

Rate this post Literature is the most important part of the human body. With its several ways of understanding and communicating with people, it is capable to juggle multiple thoughts at the same time. The ability to master these skills truly strengthens the opinion on people who believe in the importance of literature. With well...