The American astronaut Edgar Mitchell once described the earth from outer space as “a sparkling blue and white jewel,” a “light, delicate sky-blue sphere” outlined with “swirling veils of white” amidst a “thick sea of black mystery. ” Indeed, the earth in space looks like a lonely sphere with neighbors separated by vast distances other than its one moon. More importantly, one can barely recognize the subtle details of the planet’s geographical features except the wide oceans and its land mass surrounded by water.

Don't use plagiarized sources.
Get Your Custom Essay on Earth from Space Just from $13,9/Page

From a distance, one cannot tell for certain that in that lonely planet lived billions of people going about their own ways day and night. If there are authorities who fit the role of describing the earth in space, no other groups of people can best fit that role other than the astronauts who for at least once or for a few times were able to catch a glimpse of our planet. Aleksei Lenov, a USSR astronaut, said that “the earth was absolutely round” while American astronaut Charles Walker’s attention was immediately caught by “a panorama of brilliant deep blue ocean” with “shades of green and grey and white” upon reaching outer space.

There are still countless others who had the rare opportunity to take a look at the earth from such a distance afforded by the outer space. In general, it can be said that the astronauts took much notice of the more general features of the earth, focusing on the earth as a whole and not in terms of the multitude of land and water varieties that comprise it on closer inspection. That perhaps owes up to the fact that the view of the earth from outer space barely gives the viewer a broader look at our planet.

Satellite images also reveal how almost a third of the earth is comprised of those vast quantities of sea water, thereby prompting observers to not fail to see the deep blue blanket of water surrounding the lands and the people. More importantly, perhaps it is only through the view from outer space are we able to see the drastic effects of every tree cut down and a whole range of rainforests razed by fires and human activities.

We may not be able to recognize the massive effect of these things right from the earth, but from outer space one may not fail to acknowledge the largeness of the scale of environmental degradations which have occurred through the years. It is only from that view from the outer space that we are able to see as well the vastness of the deserts that may soon become of the forests destroyed from cutting trees for daily human consumption.

Moments like those experienced by the astronauts give us accounts of how our planet looks like, including its more general land, water and atmospheric features which, when taken altogether, offer a comprehensive understanding of the only “living” planet in the solar system thus far. Reference Hamilton, C. J. (1997). Earth from Space. Retrieved July 4, 2008, from http://www. solarviews. com/eng/earthsp. htm 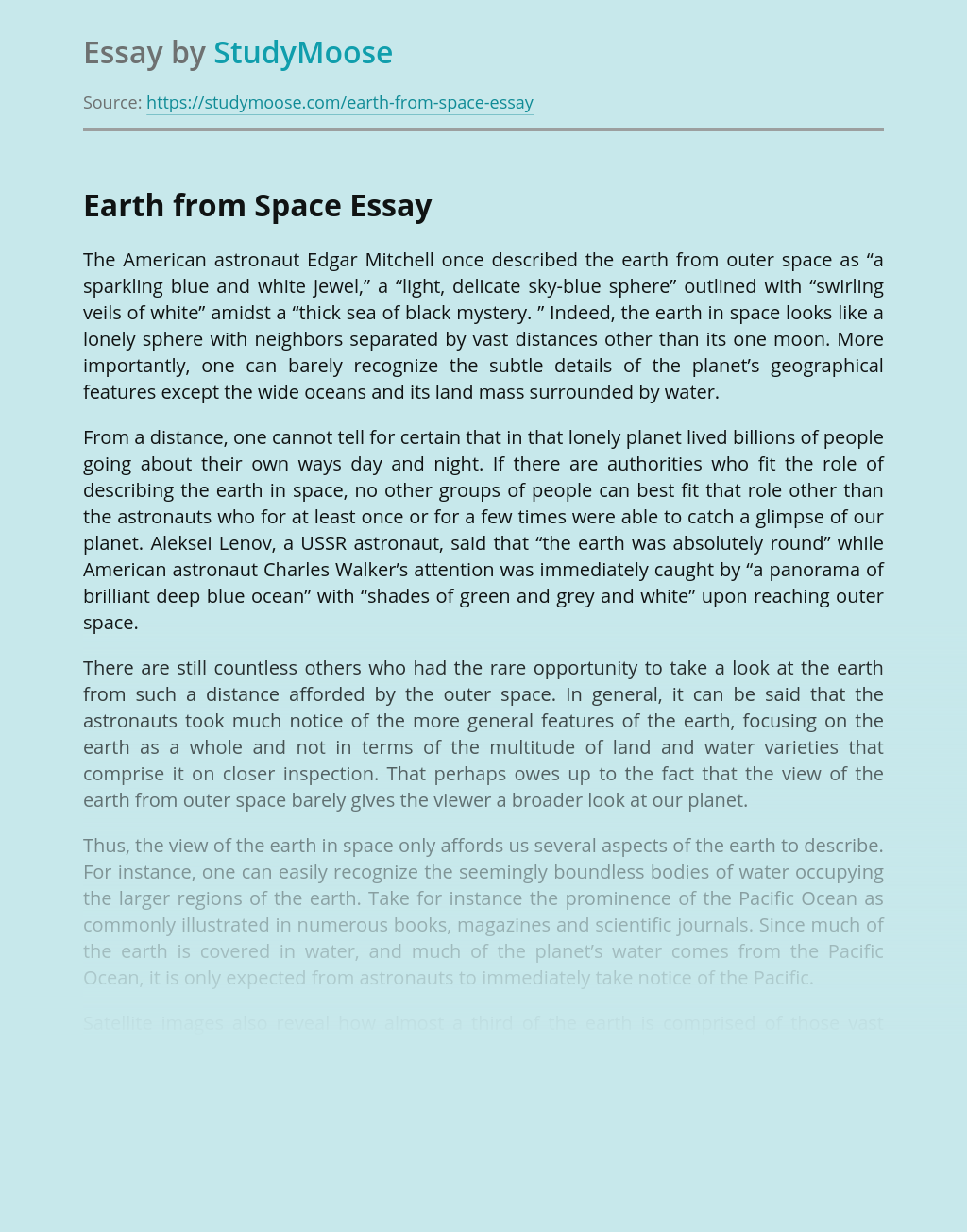 The Adventures of Huckleberry Finn is a delightful story of a young boy and his many adventures. Many of the situations Huck finds himself in require a specific sense of “street smarts” in order to successfully overcome these various predicaments. To that end, I believe that Huck’s so-called “street smarts” prove beneficial to his endeavors,...

National Gallery of Modern Art, New Delhi is the leading Indian Art Gallery. We were quite lucky to have the chance to attend the exhibition “Project Cinema City” there. The exhibition was hosted to commemorate 100 years of Indian Cinema. It sought to enquire into the interfaces between the city of Mumbai and Cinema. The...

In today’s modern times, technologies have become a vital part of our life. It helps us to have an easier and more comfortable life. In this competing world, the students should have to learn a lot when it comes to education. Everything cannot be taught by a teacher or in school. To face big challenges...

Arthur Miller’s character from The Crucible, Abigail Williams, was a beautiful girl who had a hold on people’s lives. She lied to protect herself and caused chaos for everyone in the town of Salem because all of the right people believed her. History repeats itself, and what Abigail has caused and done has been done...

Greek mythology is a religion filled with myths and legends used to tell stories that explain how some things came to be or to teach lessons. In Greek mythology, Artemis is a very popular goddess with many traits and attitudes therefore there are many myths regarding her in particular. Artemis is the goddess of the...