Marriage (also called matrimony or wedlock) is a socially or ritually recognized union or legal contract between spouses that establishes rights and obligations between them, between them and their children, and between them and their in-laws. The definition of marriage varies according to different cultures, but it is principally an institution in which interpersonal relationships, usually sexual, are acknowledged. In some cultures, marriage is recommended or considered to be compulsory before pursuing any sexual activity. When defined broadly, marriage is considered a cultural universal.

Don't use plagiarized sources.
Get Your Custom Essay on Early Marriage Rate Just from $13,9/Page

An early marriage, is an issue where argued by many now a days. Some people are advocated for early marriage because it is healthy. Until the late 20th century, teen marriage was very common and instrumental in securing a family, continuing a blood lineage and producing offspring for labour.

Many factors contribute to teen marriage such as teen pregnancy, religion, security, family and peer pressure, arranged marriage, economic and political reasons, social advancement, and cultural reasons. Studies have shown that teenage married couples are often less advantageous, may come from broken homes, may have little education and work low status jobs in comparison to those that marry after adolescence.

Early marriage arise from number of causes like lack of education, gender bios, pressure from family or friends, and lack of knowledge about the implications of early marriage. Early marriage also has several negative effects. It can lead to psychological and emotional stress not only to both parties but also to their children. It can also lead to health problem to girls because as their body is too young to conceive.

Figure 1: Early marriage rate ranges 2 million up to 4 million. The Government must be aware of this problem.

Figure 2: From 2 million up to 4 million. At this point the rate increases simultaneously. This is very alarming; the Government must control this problem.

Figure 3: 2 million up to 4 million is the rate of Early Marriage. The rate increases simultaneously. 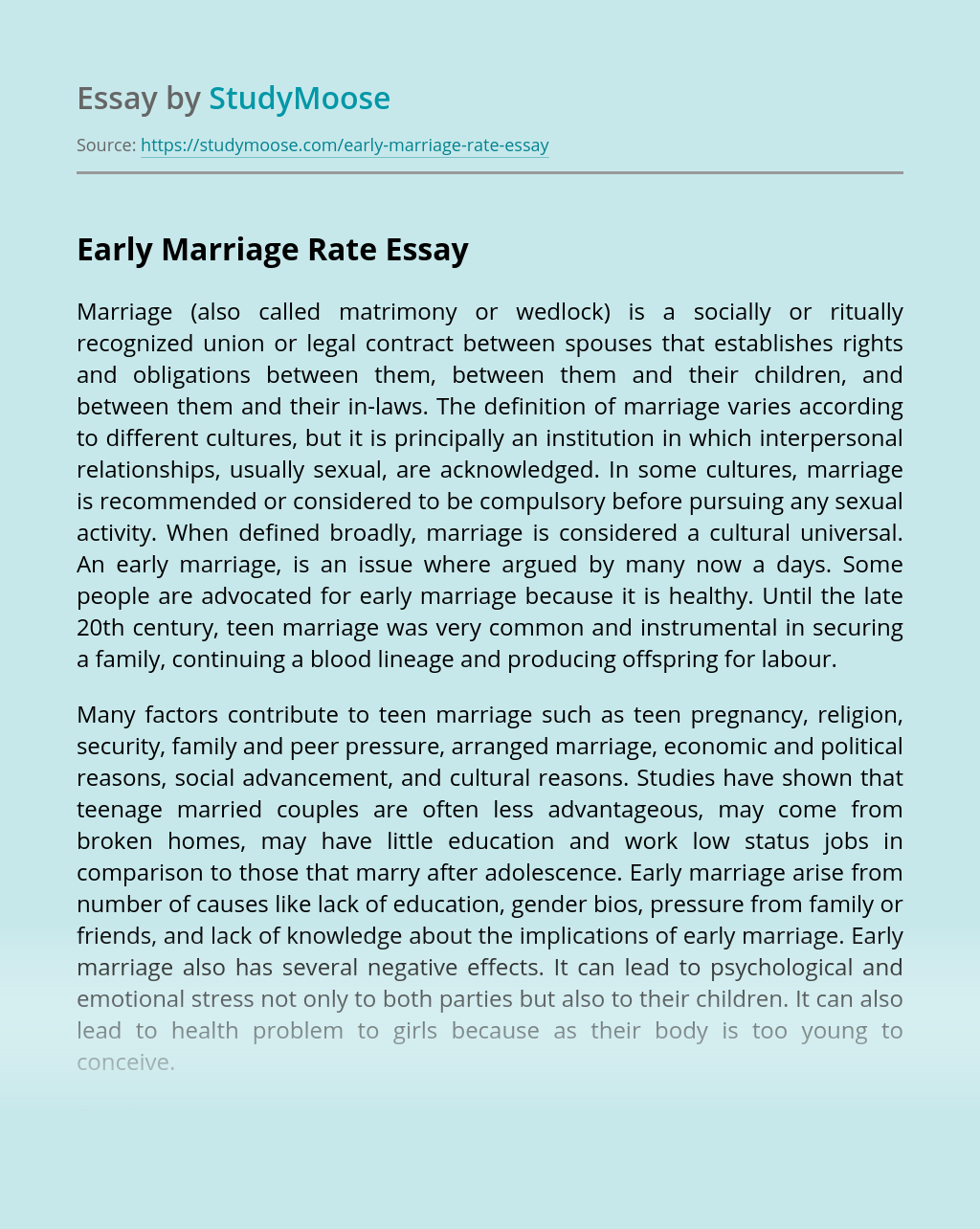 Introduction Teenage pregnancy or adolescent pregnancy is the early conception of female whose age ranges from 13 to 19. Just recently, adolescent has become an important issue in health in great number of countries, both developed and developing. However, pregnancy in adolescence is not an unusual phenomenon as it keeps on rising every now and...

Early Childhood (Two to Six years) During this time in a child’s life there is a remarkable growth in fine motor skills and gross motor skills. During early childhood, children start running, tumbling, dancing, as well as drawing, writing, and cutting with scissors (McDevitt, & Ormrod, 2004). At this stage it is often seen that...

Get Essay
Holden Caulfield in "Catcher in the Rye"

Holden Caulfield, in The Catcher in the Rye, is much like the typical teenager of today. Throughout the novel, Holden goes through problems that many modern teenagers can relate to. Holden is a lonely teenager who struggles to find direction in life. His actions are very similar to those of teenagers today. Some important characteristics...

Difficulties of Being A Teenager

Is hard, harder than some can imagine, harder than some can even remember. It’s those years you’ll never forget, though sometimes you wish you could wipe away. They seem to last forever, but when you look back, they went by so fast. Being a teenager is falling in love too fast, and too hard, talking...

A professor named Peter Drucker stated, ‘’the most important thing in communication is hearing what isn’t said.’’ The quote basically means the ability to read the emotions and nonverbal communication of another person increases the understanding and elevates relationships. A prominent writer and producer named John Hughes directed a movie called The Breakfast Club where...