Early marriages are marriages that happen between people under the age of eighteen. Such marriages are spread all over Palestine. In particular, they occur in Palestinian rural rather than urban areas. These practices take place for several reasons. One very important cause is the religious definition of adulthood which is more related to physical and biological aspects rather than psychological and behavioral. Another essential purpose for this practice is the lack of adequate education. Moreover, sometimes it is caused by the negative social point of view that links between fertility and age for women.

Don't use plagiarized sources.
Get Your Custom Essay on Early marriage Just from $13,9/Page

However, governments, nowadays, are working to decrease the practice of early marriage as it deprives girls from their major rights and causes many health consequences for them. One effect of the early marriage is that it takes away many of the girls’ major rights. Firstly, it deprives them from the right to continue their education. As an illustration, the majority of girls, especially those who live in rural areas, are forced to get married instead of persisting their education.

Furthermore, this deprivation results in lack of knowledge on how to raise the children well. Secondly, being forced to marry at an early age does not allow the girls to choose their lifelong partner.

Thus, it makes her more of a follower instead of taking her decisions by herself. Finally, girls who marry at a young age are often isolated from their society and friends. This means, most of the young wives do not have the right to communicate freely with their family and friends since the responsibilities does not allow them to do so. On my point of view, forcing young women to marry before they reach eighteen years old is a violation against basic human rights. Another possible effect of the early marriage is that it leads to some bad health consequences on the woman herself and on her children too.

For example, young brides are expected to become pregnant at an early age and there is a strong connection between the age of a mother and affectionate mortality. To be specific, Girls ages l0-14 are five times more likely to die in pregnancy or childbirth than women aged 20-24 and girls aged 15-19 are twice as likely to die .additionally, young mothers live greater risks during their pregnancies and suffer from many complications.

For instance, they go through many dangerous conditions such as heavy bleeding, fistula, infection, anemia, and eclampsia which contribute to higher mortality rates of both mother and child. In addition, early marriages may also lead to vulnerability to HIV/AIDS among young wives. To be particular, in Africa, Being young and female is a major risk factor for infection and young girls are being infected at a considerably disproportional rate to that of boys. Despite the fact that early marriages are sometimes seen by parents as a mechanism for protecting their daughters from HIV/AIDS, future husbands may already be infected from previous sexual encounters; so, it is a risk which is particularly serious for girls with older husbands.

The lake of major rights and the physical consequences are some of the effects of early marriage that leads to a poor life to an innocent child. Therefore, there has to be more emphasis on the governments to convince people against it .However, families, nowadays, have recognized that young marriages are not good for children especially for girls. In addition, some concerned groups have actually tried to make new laws in countries so that the legal age of marriage will be raised to eighteen or more in order to save lives and create a better world for females.

Early marriage. (2016, May 31). Retrieved from https://studymoose.com/early-marriage-2-essay 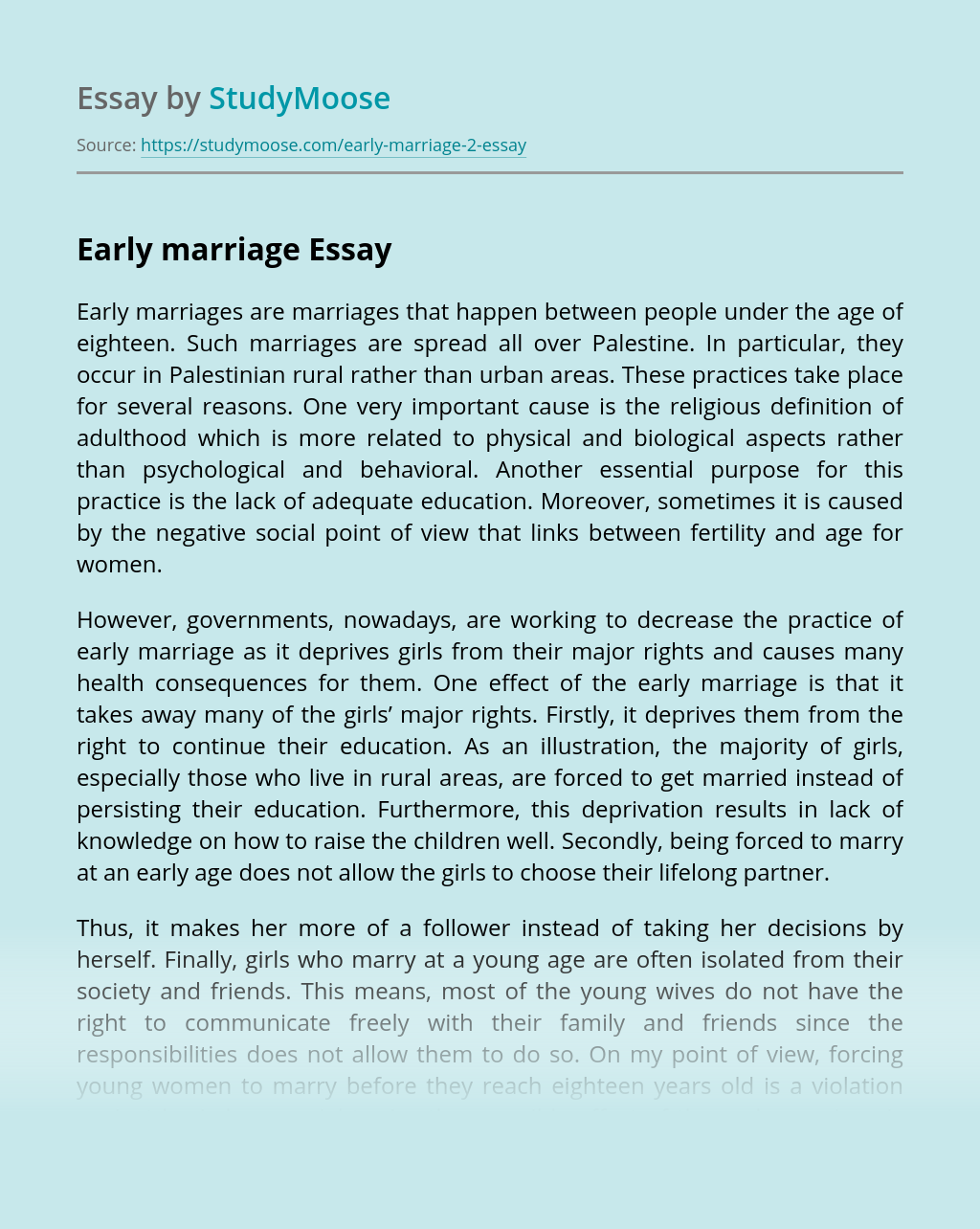 Analysis of the Poem the Red Hat

Rachel Hadas’ poem “The Red Hat” is distinguished the perspective of the parents of a young boy who begins to walk to school by himself. The poem reveals the actions and emotions of the moms and dads who have problem with allowing their kid to end up being more independent. Nevertheless, this poem is not... VIEW ESSAY

Parental styles have a well-documented influence on children, and play a strong role in a child’s development. Authoritative parenting has been proven to potentially reduce a child’s risk of associating with antisocial peers, and deter engagement in delinquent behavior. Authoritative parenting has also been shown to raise adults that have healthy emotional adjustment and prosocial... VIEW ESSAY

View sample
Get Essay
How does Priestly show tension is at the heart of the Birling family?

Tension is a component that has actually been elaborately woven at the heart of the Birling household. The Birling’s are a family of 2 generations; the older assertive and callous generation and the younger ambitious generation with not yet fully shaped minds. The lack of understanding and empathy for the younger generation (Eric and Shelia)... VIEW ESSAY

Live is a continuous process of making decisions and setting up goals for the future. Some people will prefer living it alone, and enjoying the single life, but others may prefer living it with a partner, and enjoy married life. Everyone in this world faces a problem at some point in life, either single or... VIEW ESSAY

That documentary was quite intriguing especially the thing about Saturnina and her uncle Jose Maria.It got me thinking for an hour or two because if it was true it would be a disgrace to the family. The events links together; Saturnina got pregnant, her mother, Theodora took her on a long vacation and then they’ve... VIEW ESSAY