Topic: Early encounters between American Indians and European colonists led to a variety of relationships among the different cultures. Analyze how actions taken by BOTH American Indians and European colonists shaped those relationships in each of the following regions: New England, the Chesapeake, the Spanish Southwest, and New York and New France. Thesis: Actions such as Bacon’s Rebellion, the Powhatan Wars, King Phillip’s War, the Encomienda, the New England Confederation, and the Fur Trade, Dutch and French. New England: King Phillip’s War is the first supporting idea.

Don't use plagiarized sources. Get your custom essay on
“ Early encounters between American Indians and European colonists led to a variety of relationships among the different cultures ”
Get custom paper
NEW! smart matching with writer

* The New England Confederation put to the test during war with Indian chieftain King Phillip (Metacom)—Wampanoag Chief son of Massasoit.

The impact of the war led to Native Americans effectively removed from MB, Connecticut, and Rhode Island. The Chesapeake: Bacon’s Rebellion and the Anglo-Powhatan Wars are the second supporting idea. * Nathaniel Bacon, an aristocrat in western Virginia and member of House of Burgesses began mobilizing a militia to protect whites from Indians.

Bacon’s rebels opposed to aristocrats and Indians. The Powhatan Wars were three wars fought between Virginians, and the Powhatan in the early 17th c. War resulted in a boundary being defined between the Indians and English. The Spanish Southwest, New York and New France: the Encomienda (S.W.), the New England Confederation and the Fur Trade Dutch/French (N.Y. &N.F.) is the third supporting idea.

* Amerindians forced to do unpaid labor to build roads, buildings, and other infrastructure in towns through the Encomienda System (S.

W.) * The N.E. Confederation made specifically for collective security against the Indians (N.Y) * The Beaver Fur Trade led to exploration of much of N.A. coureurs de bois: fur traders (N.F.) FRQ #2

* Connecticut, New Haven, Plymouth, and Massachusetts formed an organization for collective security against Indian attacks. This was an important step in creating more unity among New England Colonies The 1754 Albany Plan for Union is the third supporting idea. * Proposed by Benjamin Franklin, this plan would have created an inter-colonial congress. It was rejected by Britain for giving too much control to the colonies. It was also rejected by the colonies who feared oppressive colonial congress. The 1713-1663 “Salutary Neglect” is the fourth supporting idea. * G.A.: Americans enjoyed much choice regarding religious groups. Churches increasingly had to cater to the needs of their parishioners. This was an important step towards democracy. FRQ #3

Topic: To what extent did economic, geographic, and social factors encourage the growth of slavery as an important part of the economy of the southern colonies between 1607 and 1775? Thesis: Economic, geographic, and social factors all contributed to the rise of importance for slaves in the S. colonies as their position in American society changed from 1607 and 1775. Economic Factors Encouraging the growth of Slavery is the first supporting idea. * Tobacco as brought by John Rolfe saved the colony of Jamestown. Tobacco was starting as a cash crop and with Europe’s desire for tobacco. Plantations were being brought out and required vast chunks of land on which to cultivate the tobacco.

* Africans were better suited with their immunity to disease and their ability to work. Africans however were very expensive, but they were servants for life and with regulation laws, slavery in the south was important. Geographic Factors Encouraging the growth of Slavery is the second supporting idea. * Rivers and hot weather was the backbone of the South. The south was able to plant different crops than the north. The south cultivated its most important crops, tobacco and rice. The Carolinas were best known for their rice cultivation. Here in the Carolinas, Africans were used to growing rice. Social Factors Encouraging the growth of Slavery is the third supporting idea.

* The ownership of slaves became
an important sign of wealth and status in the social hierarchy of the south. The more slaves and the bigger plantation someone owned, the higher up they were. Everyone who was white was automatically above blacks, as they were seen as mediocre and incapable of academic success and learning. FRQ #4

Topic: Compare the ways in which religion shaped the development of colonial society (to 1740) in each of the following regions: New England, Chesapeake, and Middle Atlantic. Thesis: During the development of Colonial America, the New England region was affected socially, politically, and economically, whereas in the Chesapeake bay it was mostly men who came over to explore the new world in search of gold however, religion in the Middle Atlantic was not as much of a necessity therefore had less of an overall effect on society. Religion shaping colonial society in New England is the first supporting idea. * The New England region settlers were escaping England’s unification of religion and government. During the mid 1600’s approximately 20,000 colonists settled in the New England region. This religious driven movement was called, the Great Migration. * The Puritans were a hard working, god-fearing people. New Englanders established small farms, on which they raised corn and wheat, sheep, beef cattle, vegetables, and dairy cattle. Religion shaping colonial society in the Chesapeake is the second supporting idea.

* The Chesapeake colonies did not focus much on religion because it was mostly populated by business men trying to make a living in the New World. There were also more Atheists in the Chesapeake because of the low life expectancy causing people to not believe in God as a savior. Religion shaping colonial society in the Middle Atlantic is the third supporting idea. * Founded on the idea of a safe haven for all sorts of religions, particularly Pennsylvania. In the New Netherlands (later renamed New York in 1664) Ethnic and religious differences prevented a development of a strong sense of community in the 1620’s-1640’s * Dutch West India Company more interested in profits than keeping order, so New Netherlands was founded for economic purposes and its origins in trade explain its diversity, including Dutch, German, French, English, Swedish, Portuguese, African, Calvinist, Lutheran, Quaker, Catholic, Jew, Muslim. FRQ #5

Topic: To what extent did the three regions of colonial America develop separate societies in the years prior to the American Revolution? Thesis: Though there were many similarities in the development of the New England, Middle and Southern Colonies, they were very different: politically, socially, and economically. The New England Colonies is the first supporting idea.

* The New England colonies were a Theocracy, which means the government was run basically by the church. * The New England Colonies supported each other to create a one-class system: middle class. * Although some New England farmers exported grain and livestock, many could barely feed themselves and their families because the poor soil made farming difficult. * New Englanders therefore turned to alternative occupations, trading with the West Indies and developing fishing, small manufacturing, and shipbuilding The Middle Colonies is the second supporting idea.

* The Middle Colonies had their government and church separated. * Had a two-class system which consisted of upper class landowners and middle class professionals living in large cities. * Economy: grains, livestock, ship building, shipping.

The Southern Colonies is the third supporting idea.

Topic: “Geography was the primary factor in shaping the development of the British colonies in North America.” Assess the validity of this statement for the 1600’s. Thesis: Geography played an important role in the making of the British colonies in North America. In some areas, the geography
influenced the living and farming conditions for the better, and for some areas, for the worse. Geography in the New England is the first supporting idea.

* The land on which the New England colonies were situated was rocky, heavily forested, and therefore, not suited for planting. The cold climate did not help. As a result, New England’s economy did not depend on the land as much as other colonies did. Instead of making their living by farming, New Englanders were loggers, fishers, whalers, and shipbuilders. Geography in the Middle Colonies is the second supporting idea.

* The Middle colonies, however, fared off much better. The Middle colonies’ land was very fertile and very much suited for farming and planting. The climate was warm, too. So of course the Middle Colonies were nicknamed the Breadbasket Colonies: They produced the majority of the bread and wheat of all the British colonies. They also had a good amount of iron ore in their land. Geography in the Southern Colonies is the third supporting idea. * The Southern colonies’ geography was well-suited to farming, too. It was warm year round and provided a great place to produce cotton, indigo, rice, and many other crops.

Early encounters between American Indians and European colonists led to a variety of relationships among the different cultures. (2016, Mar 27). Retrieved from http://studymoose.com/early-encounters-between-american-indians-and-european-colonists-led-to-a-variety-of-relationships-among-the-different-cultures-essay 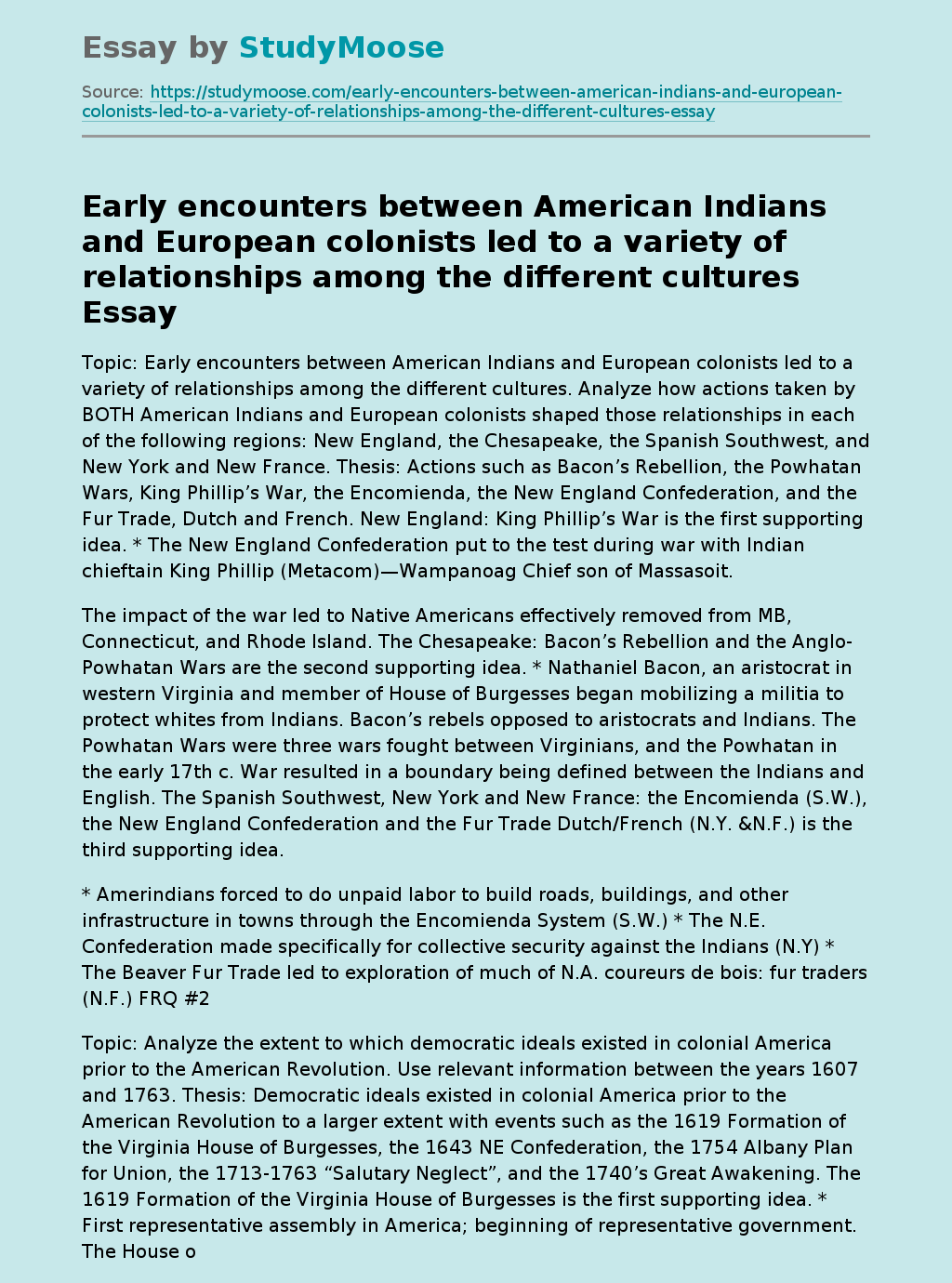