Early adulthood is a period of great adjustment in one’s life. It is a time where young adults are confronted with new challenges. With the attainment of adulthood, young adults are to be capable of supporting themselves in various ways. This essay will discuss the important challenges that would have an effect on one’s life. First, I will discuss mate selection then, I will explore parenthood and then addressing which is the more significant one.

Mate selection can be the most challenging period of life for a young adult.

Don't use plagiarized sources.
Get Your Custom Essay on Early adulthood Just from $13,9/Page

It is a complex process, because there are several issues to be considered when choosing a partner. According to Buss (1985,cited in Seal, 1997:75), people usually choose a mate who is very similar to themselves. However, the fact that 40% of all first marriage result in a divorce (Seal 1997:76) shows clearly that the challenge of mate selection can influence one’s like in a very major way.

As Seal asserts that when choosing a mate, we will most likely prefer someone who is parallel to us in almost every aspect.

The most significant elements are usually age, education, race and religion, followed by attitudes and personalities. Every individual has different expectations of their partners. Some may favour physical attractions such as a well-built body whilst some might prefer inner qualities. Just as men and women agree on what matters in choosing a mate, a mutual concern for each other is necessary for making a relationship work ( Seal 1997:76 ). Once a person has selected a mate, there is the possibility that he or she may want to have children and this leads to yet another challenge for the young adult – parenthood.

Parenthood is a further challenge which most young adults have to face. Indeed, “There is no doubt that having a baby around the house significantly changes established routines, often leading to negative consequences,” (Miller and Sollie,1980,cited in Seal 1997:77). With restrictions in personal freedom and privacy, come new responsibilities and these present a very vital challenge. For example, adults adopt new roles, such as those of a parent.

The interaction of individual development in response to parenting is characterized in the life cycle of a family ( Seal 1997:76 ). The nurturing stage is when parents share the care of the infant. They are then encountered with demanding children and confrontation, with the increased of financial burdens, child’s need, shifting roles and the birth of another child. When the child is 5 to 12 years of age, it becomes more self-sufficient and parenting becomes easier. However, things seem to vary once again when the child reaches early adulthood. They then tend to demand the rights of adulthood. Apparently, these signify that parents will in the long run encounter different kind of problems depending on the age and attitude of the child. Whether they succeed or fail in these new roles, it is still true that being parents will have significant effects on their life.

Nonetheless, evaluating the functions of mate selection and parenthood, parenthood seemed to be the greater one compared to mate selection. There’s a cliché saying that “The gift of parenthood is truly divine”. Indeed, as Seal (1997:76) asserts, “becoming a parent is generally taken as a sure sign of adulthood”. Parenting for most people, is the greatest and the most fulfilling adventure. This is because parenting, unlike mate selection, involves partner and children. It is considered a developmental work in which parents grow with their children and in which parents and children are bonded to each other. It connotes one role in life and recognizes the significance of others, such as companionship. 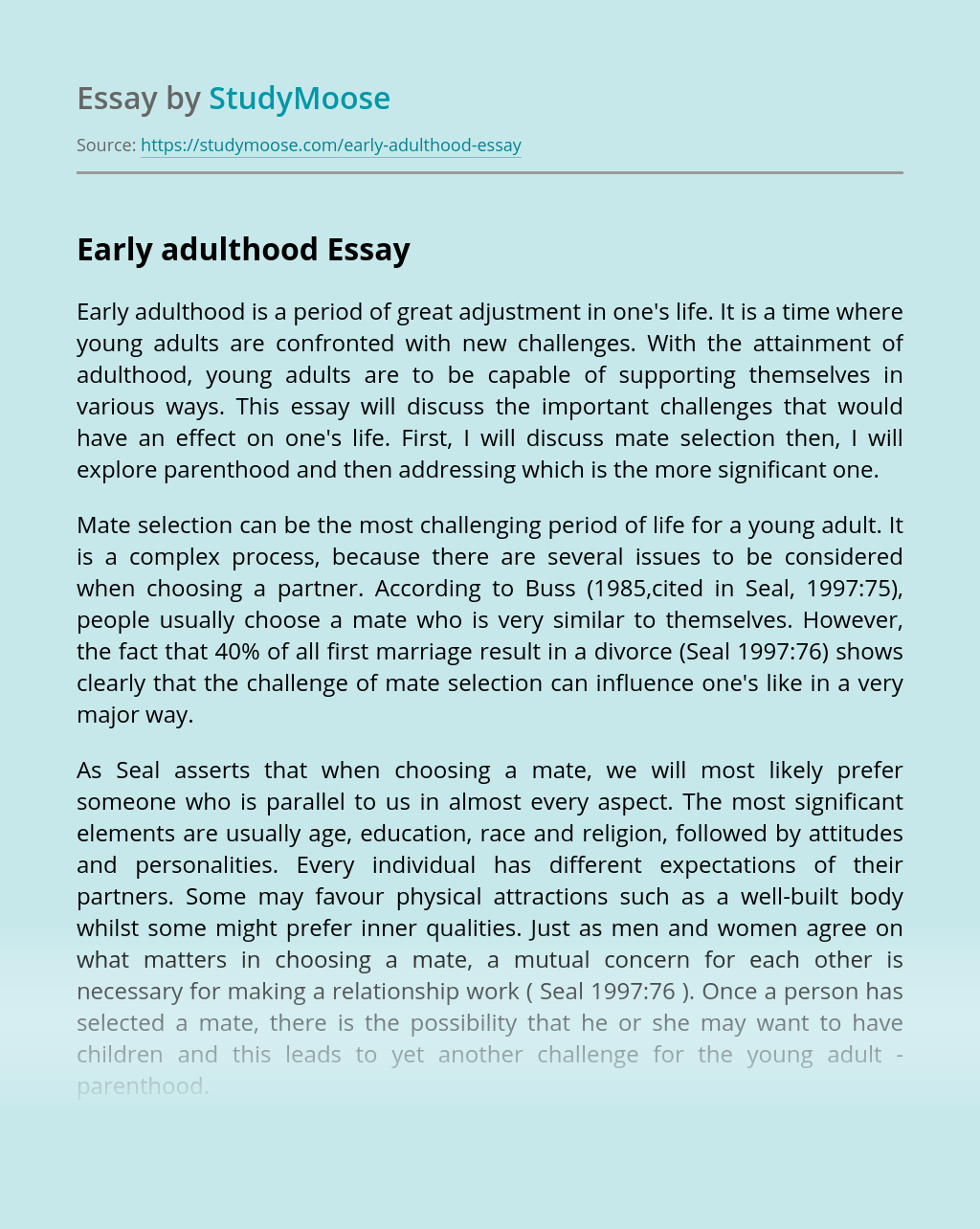 With what I have learned from the My Virtual Child program, I now understand the complexities of raising and guiding a child. Mere decisions made during infancy can affect a child long term, physically, cognitively, and even emotionally. To make important developmental decisions cannot simply be classified as a challenge, it is one of the...

A thorough second reading of Pride and Prejudice compels the reader to view the novel with a different perspective. Besides being a novel of courtship and romance, it focuses on decorum of conduct. Pride and Prejudice is about consequences. Jane Austen introduces her characters to the reader through simple conversations, refraining from authorial comments and...

A relationship between a parent and a child begins the day the child is born. First, the child has many powerful gifts to offer to his parents. His unqualified love, absolute trust, emotions and thrill to discover revolves all around the parents from the day he is born. As the parent, you have many gifts...

Parents who are selfish have a big effect on children. The way children are raised all depends on the parents. If they aren’t a good parent to your children and let selfishness get in the way of raising their children the right away it can have a large impact on the children’s lives in the...

Natural growth is the child-rearing method that working class and poor parents use to raise their children because there is not a lot of time and money for structured activities and long verbal discussions with the children (Lareau, 2003). Families who practice natural growth child rearing practices need to focus on providing the simpler needs...