Each plant in the nature is unique not only to be a part of biodiversity but also for the certain medicinal value. Medicinal properties of the various plant species is due to the presence of particular unique type of medicinally important chemical compounds. There are variable in different plant species. The chemical compound concentrations of inside of the plant body in each individual of the plant species are found to be differing. Plants are used as an essential source of medicines for the treatment of various diseases since the ancient time for humans due to presence of certain chemicals/active ingredients inside of their body.

Don't use plagiarized sources. Get your custom essay on
“ Each plant in the nature is unique not only to be a ”
Get custom paper
NEW! smart matching with writer

Presence, concentration and types of the biochemical performing to be usefulness of the various plant parts are used as safe medicine for the treatment of various disorders [1].

Plant derived medicines are eco-friendly and low cast drugs. Easily availability of Medicinal plants in forest area; these are marked as a prime and effective source of primary health care in rural areas.

Plants have potential chemical compounds that have been used for thousands of years in the traditional remedy of many other cultures has been widely documented in India. The plant-based drugs used in the traditional systems continue to play a significant role in health care and it has been projected by the World Health Organization. 80% of the world’s inhabitants rely mainly on traditional medicines for their primary health care; remaining 20% of the populations mostly residing in developed countries the plant products also play a vital role in the health care systems.

Extraction, isolation, identification and biological properties of chemical substances from the various medicinal plants have now formed the major field of study in biochemical and pharmaceutical sciences. This may be due to the presence of wide range phytoconstituents present in it [2]. Hence keeping the importance of plants is being screened for newer and effective chemotherapeutic agents. Higher plants can serve as potential anti-infective and source of new antimicrobial agents [3].

Crescentia alata belonging to the family Bignoniaceae and it is a flowering plant that is native to Southern Mexico and Central America and it is naturalized in India [4]. In India, it is found in Delhi, Uttar Pradesh, Bihar, West Bengal, Sikkim, Assam, Tripura, Gujarat, Maharashtra and Tamil Nadu. It is an evergreen tree reaching upto 6 to 10m in height with a broad, irregular crown composed of long, spreading branches clothed in 5 to 15cm long bright green leaves. The tree is most important ornamental in the landscape for its year-round production of flowers and fruit, both of which are unusual. They have 5 cm wide flowers, which bloom at night, are yellow/green with red or purple veins, cup-shaped, and appear to emerge directly from the branches. These are followed by the emergence of the large, round and cannonball-like fruit 7-10 cm diameter that are difficult to break into, with a smooth, hard shell, which hang directly beneath the branches. The calabash tree grows in clayey soils with inadequate drainage subject to frequent flooding. The fruits develop after pollination by bats and have a hard green woody shell. Inside fruit there is a pulp that has medicinal applications [5]. A decoction of the leaves is used as an astringent and antihemorrhagic. The fruit of C. alata is pectoral. The pulp of the fruit is mainly used in the treatment of colds, haemoptysis, dysentery and for diseases of the kidney. C. alata is used to decrease various respiratory afflictions including asthma, bronchitis, and cough, and also is used to treat skin disorders and internal in?ammations [6].

Phytosterols are are a group of steroidal alcohol, naturally occurring compounds found in plant cell membranes. It is recognized as an important component of healthy diets and has been demonstrated to reduce blood cholesterol levels in hyper and normocholesterolemic subjects. Phytosterols may also inhibit colon cancer development. Stigmasterol has been reported that a valuable human hormone that plays an important physiological functions including in regulatory and tissue rebuilding mechanisms related to estrogen effects of the human body, it has been identified as a suitable precursor in the manufacture of semisynthetic progesterone, as well as acting as an intermediate in the biosynthesis of steroid harmones such as corticoids, estrogens, and androgens which is responsible for the regulation and development of the human body reproductive system and secondary sex characteristics. Stigmasterol is a diet high in phytosterols may inhibit the absorption of cholesterol and lower serum cholesterol levels by competing for intestinal absorption. Similarly, the main pharmacological activities reported for stigmasterol are Antioxidant, Anti-cancer, Anti-arthritic, Diuretic, Anti feeding, insecticide, Anticomplementary, Hypoglycemic Thyroid Inhibiting Properties, Precursor of Progesterone, Female activating hormone, Anti-microbial, Anti-asthama, Anti-inflammatory, Antimutagen, Neurotoxic, and Cytotoxic activities [8].

Therefore, in this paper, we describe the isolation and structural elucidation of a pure bioactive chemical compound characterized as Stigmasterol, a well known phytosterol from the methanolic fraction of the leaves of Crescentia alata using different spectral analytic techniques. Stigmasterol is reported to exhibit a wide spectrum of pharmacological activities against various diseases. The antimicrobial activity of the stigmasterol was studied against selected bacterial and fungal strains. The cytotoxicity of the stigmasterol was investigated against on Hela (mammalian cancer) cell line. To our best knowledge, this is the first study to isolate and characterize this compound from the methanolic crude extract of leaves of Crescentia alata belonging to the family bignoniaceae.

The filtrate was subjected to column chromatography using silica gel (70-240mesh) as stationary phase. The solvent system consisted of n-hexane in combination with increasing percentage of chloroform. About 25 ml fraction were collected using hexane, chloroform and methanol by gradient elution technique and elutes were monitored using thin layer chromatography. The active fraction showing similar Rf value were pooled and further re-chromatography. Isolated sterol was verified thin layer spray with 10% phosphomolibdic acid and the plate was obseved. The presence of Stigmasterol was detected by the formation of Blue colour spot in the plate [9]. Upon keeping aside for few hours crude crystals were obtained. Fraction corresponding to Rf value were pooled, washed with methanol and subjected to TLC with Methanol-Chloroform (1:1) (v/v) as mobile phase, Rf values 0.70 yielded a crystal substance. This was further recrystallized using methanol to get pure compound. These were confirmed using Salkowski reaction and Liebermann-Burchard reaction as described by Harborne [10].

The isolated compound was further analyzed by chemical tests [10], determination of melting point [11], and different spectroscopic analytic techniques and in comparison with their literature data for chemical structure elucidation and confirmation.

The antimycobacterial activity of the bioactive compound was carried out using stock concentration of 100 ?g/mL. Mueller Hinton agar (MHA medium) was used as the culture medium for the micro organisms. The preparation of agar plates nutrient agar medium was prepared as per manufacturer instructions and sterilised at 121°C for 15 min. It was poured into sterile petri dishes and then allowed to cool and solidify. The sterilized media in the petridishes were inoculated with 0.1 mL of the standard inoculum of the test microbes. The inoculum was distributed evenly over the surface of the growth medium with sterile spreaders. Then the sterile discs (about 6 mm in diameter), containing the test compound at a desired concentration, are placed on the agar surface and left for compound diffusion for about 30 minutes at room temperature. Using the same respective solvent, the negative control was prepared. For antibacterial assay chloramphenicol (30 ?g/disc) while the antifungal assay Fluconazole (30 ?g/disc) was used as a positive control. Generally, the antimicrobial agent diffuses into the agar and inhibits germination and growth of the test microorganism. Incubation of the inoculated medium was made overnight at 37°C for bacteria while for fungi 48 hours incubation at 25°C. After then the plates containing the medium were observed for the antimicrobial activity (zones of growth inhibition). The experiment was repeated thrice and the zone of inhibition around the disc, that was indicative of the ability of the antimicrobial test sample to kill bacteria. The zone of inhibition (microbes-free area) was measured with a transparent ruler. The mean of the results was recorded in millimeters (mm).

The MIC of the isolated compound was determined using the broth dilution method. Twofold serial dilutions of the compound in the sterile broth were made to obtain the concentrations of 150 ?g/mL, 100 ?g/mL and 50 ?g/mL. An amount of 0.1 mL suspension of the standard inoculum of the test microbe was then inoculated into the different concentrations of the compound. The tubes were incubated at 37°C for 24 h and 25°C for 48 h for bacteria and fungi, respectively, after which the plates were observed for turbidity (growth). The MIC assay technique was used to determine the lowest drug concentration of an antimicrobial compound which prevents the growth or that will inhibit the visible growth of an each microorganism after incubation.

MBC/MFC’s were carried out to determine whether the test microorganisms were killed or only their growth of pathogen was inhibited. MHA broth was prepared and autoclaved at 121°C for about 15 minutes to sterilize the broth. Then the agar poured carefully into the sterile petri dishes and the plates were allowed to cool and solidify the medium. The petri dishes were pre-sterilized before the sterilized medium poured into them. The contents of the minimum inhibitory concentration in the serial dilution were then subcultured onto the prepared broth (respective medium) and incubation was made at 37°C for 24 hours and 25°C for 48 hours for bacteria and fungi, respectively. After incubation, then the each plate was observed for growth and presence of microbial colony. The MBC/MFC’s were the plates with lowest concentrations of the compound in serial dilution without colony growth.

To estimate cell cytotoxicity, HeLa (mammalian cancer) cell line was obtained from National Centre for Cell Sciences Repository (NCCS- Pune, India). Minimum Essential Medium (MEM) supplemented with 100 units of penicillin, streptomycin and 10% (v/v) of foetal bovine serum (FBS) in a humidified atmosphere of 5% CO2 at 37?C until confluent. The cells were seeded at 1?104 cells/well in 96-well culture plates for 24 h.

A miniaturized viability assay using 3-(4,5-dimethylthiazol-2-yl)-2,5-diphenyl-2H-tetrazolium bromide (MTT) was performed as per ISO 10993:5 method. The control and test sample in triplicates were added on the cell. After incubation at 37±1 ?C for 24 h. the monolayer was examined microscopically for the response around the test sample. As per the Table 1, the reactivity were graded as 0, 1, 2, 3 and 4 based on zone of lysis, vacuolization, detachment and disintegration of membrane.

Each plant in the nature is unique not only to be a. (2019, Nov 26). Retrieved from http://studymoose.com/each-plant-in-the-nature-is-unique-not-only-to-be-a-example-essay 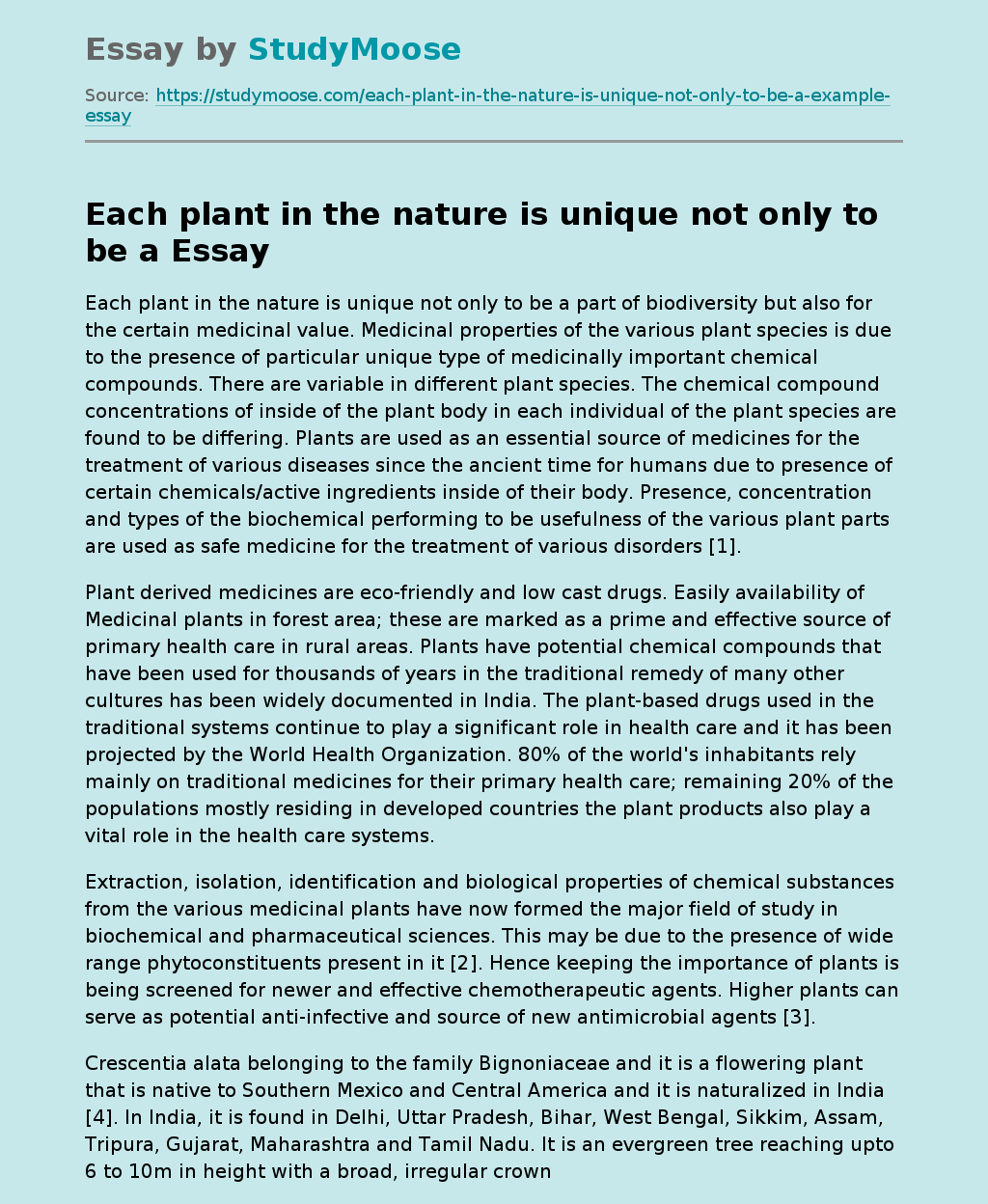