Most people like to claim that they “go with the flow”, meaning they follow what everyone is doing or going. In today’s society, everyone is flowing towards electronic cigarettes. Electronic cigarettes, more commonly referred to as e-cigarettes, are battery-powered device filled with liquid nicotine that is dissolved in a solution of water and propylene glycol. The battery is responsible for heating up the nicotine solution into a vapor that is then inhaled into the lungs when the user takes a puff from the e-cigarette tub.

Don't use plagiarized sources. Get your custom essay on
“ E-Cigarettes Should Not Be Considered as Better Alternatives to Smoking Tobacco Cigarettes ”
Get custom paper
NEW! smart matching with writer

This process creates the illusion that there is tobacco smoke in your mouth and lungs. The difference is that tobacco is not being burned and its smoke is not being inhaled like in traditional tobacco cigarettes, but both are laced with nicotine, a very addictive chemical. This new form of “smoking”, which is more accurately called “vaping” because the user is inhaling vapor rather than smoke, has gained momentum in its popularity. There has even been discussion comparing e-cigarettes and tobacco cigarettes.

However, this is a false belief. Switching to e-cigarettes would not mean the end to health risks.

In a study that examined the components of e-cigarettes’ flavorings, Harvard researchers concluded, “Our findings confirm the presence of diacetyl and other high priority flavoring chemicals in flavored e-cigarettes. Due to the associations between diacetyl, bronchiolitis obliterans and other severe respiratory diseases among workers inhaling heated vapors containing diacetyl, urgent action is recommended to further evaluate the extent of this new exposure to diacetyl and related flavoring compounds in e cigarettes” (Allen par. 29). Diacetyl is a harmful chemical found in traditional cigarettes that causes lung diseases, and e-cigarettes are no different. Although e-cigarettes are not burning up tobacco like in traditional cigarettes, this does not mean they are prone to any of its own healthy risks. As proved by the study, users of e-cigarettes are also open to their own health risks in form of lung disease because of the flavoring used.

E-cigarettes are not as harmless as originally perceived, and they are definitely not a safe way compared to traditional smoking; both forms of cigarettes are unsafe because they have the potential to damage the user’s health. E-cigarettes should not be used in favor of tobacco smoking because they are unregulated by the United States Food and Drug Administration (FDA) and are a danger to minors. Because the FDA does not regulate e-cigarettes, there is no age restriction. However many municipalities and states have concerns about the lack of regulation and have established their own laws concerning e-cigarette sales and usage. For example, 48 states and two territories have banned the sale of e-cigarettes to minors (“Alternative Nicotine Products” par. 6). Pennsylvania State Senator Tim Solobay introduced a bill to ban e-cigarettes to minors and contends, “Even though it’s not a quote, unquote nicotine product, it does contain nicotine, which is the addictive part, for the most part, of smoking. We’re just trying to say that this, like any other type of tobacco product, should be off-limits to those under 18” (Lattanzio par. 3).

For Solobay and other states such as California and New York, their main concern is the safety of minors. They consider e cigarettes the equivalent of traditional cigarettes because they, too, contain nicotine and other harmful chemicals. Just as cigarettes are banned to minors, they argue e-cigarettes should be, too. Nonetheless, prohibiting sales to minors is not enough. Because marketing for e-cigarettes is unregulated as well, many opponents and skeptics of e-cigarettes are uncomfortable with the way the marketing for e-cigarettes has been operating. Besides the fact that advertisements on television are not banned, critics have claimed that e-cigarette companies are targeting minors. In the same article published by NBC 10, Solobay adds, “Because of the flavors and the novelty of it, kids can act like they’re smoking, but they’re not smoking, but what they’re not realizing is that they’re actually getting the nicotine” (Lattanzio par. 5). The flavors that e-cigarettes come with are similar to ice cream flavors. The flavors undoubtedly appeal to the minors, especially when e-cigarettes are being advertised as “not smoking”. Minors associate “not smoking” with “not dangerous”, but the reality of it is, as Solobay points out, that they are still being exposed to nicotine and other toxins. The e-cigarette industry is targeting minors instead of consciously responsible adults.

E-cigarettes should also not be used because they have the potential to act as a gateway for smoking tobacco. Lead author Lauren Dutra is a member of the Tobacco Control Research and Education at UCSF, and she argues, “E-cigarettes are likely to be gateway devices for nicotine addiction among youth, opening up a whole new market for tobacco” (Li par. 5). As aforementioned, e-cigarettes consist of nicotine, a highly addictive chemical. If a minor, or even an adult, starts out using e-cigarettes, there is the possibility of the user developing a dependency on them for nicotine. This nicotine, however, is not only provided by e-cigarettes. Smoking tobacco cigarettes also provides the same nicotine to be introduced into the body. Traditional cigarettes then also become another pathway for those who have started on e-cigarettes to get nicotine. Nicotine dependence develops with e-cigarettes and thus brings the user to find other ways, for example tobacco cigarette, to satisfy this need.

E cigarettes are safer in the sense that they do emit less harmful chemicals than traditional smoking, but they should not be confused for a safer practice as a whole. The bigger issue with smoking tobacco cigarettes, besides its health issues, is the smoker’s addition to the nicotine in the tobacco. Nicotine is an addictive chemical that causes the smoker to pick up a pack of cigarettes every so often to get his/her daily fix. The smoker comes to heavily depend on cigarettes to get this nicotine into their body. As a result, smokers wish to quit to cut off their dependency for nicotine through cigarettes. However, switching to e-cigarettes will not help an individual. In an article published by the National Institution on Drug Abuse (NIDA), e cigarettes’ components are revealed: “Although they do not produce tobacco smoke, e-cigarettes still contain nicotine and other potentially harmful chemicals. Nicotine is a highly addictive drug, and recent research suggests nicotine exposure may also prime the brain to become addicted to other substances” (par. 11).

Because e-cigarettes have their own nicotine, it is hard to see how they can help smokers regain their independence from nicotine. At worst, the e-cigarettes will create a greater need for nicotine and provide a second option for smokers; in addition to smoking tobacco, smokers would then have the second opportunity to get their nicotine via e cigarettes. At best, smokers will drop tobacco smoking for e-cigarettes. In both scenarios, the smoker is still getting his/her share of nicotine. The problem is not the way it enters a person’s system. The problem is the nicotine is are entering the body in the first place. Because of e-cigarettes are unsafe, unregulated and gateways to other types nicotine seeking practices, they should not be used a better alternative to smoking tobacco cigarettes. Rather, the two types of cigarettes are alike in many ways so far. E-cigarettes are not completely new to the world, but it is gaining so much popularity. Nonetheless, e-cigarettes are commonly misunderstood. Changes must be implemented in order to correct society’s perspective. There should be more informational classes or programs in which both minors and adults alike can learn the truth and dangers of e-cigarettes. Educational programs would probably decrease the likelihood of people smoking e-cigarettes and also decrease the cases in lung diseases. Society should be well-informed before mindlessly going with the flow.

E-Cigarettes Should Not Be Considered as Better Alternatives to Smoking Tobacco Cigarettes. (2021, Sep 30). Retrieved from https://studymoose.com/e-cigarettes-should-not-be-considered-as-better-alternatives-to-smoking-tobacco-cigarettes-essay 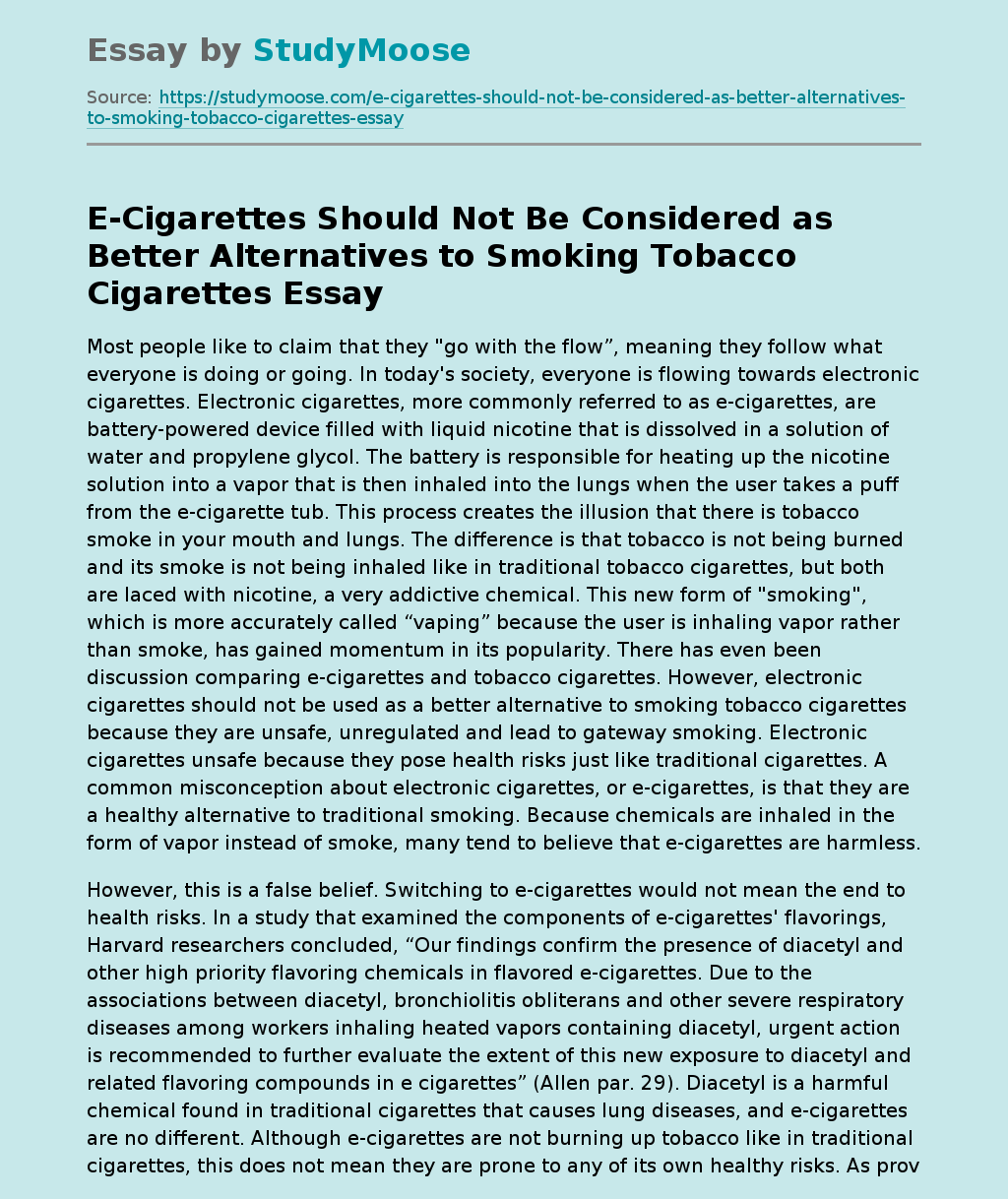