A world composed of dystopian elements, hope and dreams are shattered, bashed by the greater power of the antagonist. Such a place of melancholy is unheard of in the society of today because the human race has been fortunate as to steered off from making those bad, negative decisions. Americans live head up high, carefree of the problems of 3rd world nations and arrogant when it comes to the topic of superiority all because of how spoiled they have gotten throughout the ages.

They live such an easy, simplistic lifestyle.

But in the tales of both Wall-E and Fahrenheit 451, ignorance and oppression has seized their once brilliant world. Human misery has been engraved into each of their members starting at birth and everything has turned into a test of brute force with only the strong surviving. It is a “dog eat dog world. ” Even though they both face misery and limitations, many elements between these two worlds are different. Those being how their societies are treated by their head leaders and many others.

In the pixilated movie of Wall-E, dystopian elements are present when humans have been detrimental to their home planet. Rather than taking the time and effort to recover Earth to its former glory, the irrational people prioritize on building a ship and abandoning Earth for the time being. They try to find a new utopia in the universe, similar to the living conditions of Earth. However, they live in a paradox as their new lives in a place they hoped to improve render them lethargic and ignorant.

Ironically, the robots built by the humans seem to have more depth and dynamics in their thoughts and characters.

The novel, Fahrenheit 451, is a tale about a young man’s adventure when his eyes finally open up and learns how to differentiate the good from the corruption and the deception spoon fed to him by his upper leaders. Though convinced that society is wonderful and prosperous through the usage of brainwashing, the presence of human misery can be felt from miles apart. Many similarities are revealed between the two masterpieces. One being that they are both in a state of dystopia due to how miserable both societies are.

Even though signs of sadness are not shown, deep inside every civilian’s mind, it is guaranteed to be present. They both had something taken away from them, those being the Earth and books. Deprived of their once cherished belongings, both colonies tried to fill the void with an alternative, a new planet and tv parlors. They also rely heavily on technology which in turn makes society not emphasize the importance of personal hygiene, face to face communication, and the moral belief that not everything revolves around them.

Even though they both live in tragedy, depressed and ignorant day by day, many differences are shown throughout. In Fahrenheit 451, the main cause of the dystopian society was the censorship of books and the criticism on the academically advanced. However, in Wall-E, ignorance and the state of being lethargic caused its society’s downfall. In the end, a dystopian world is simply a world of corruption. Filled with tragedy, feelings of emptiness, and depression, a sad life is guaranteed to all of its society. 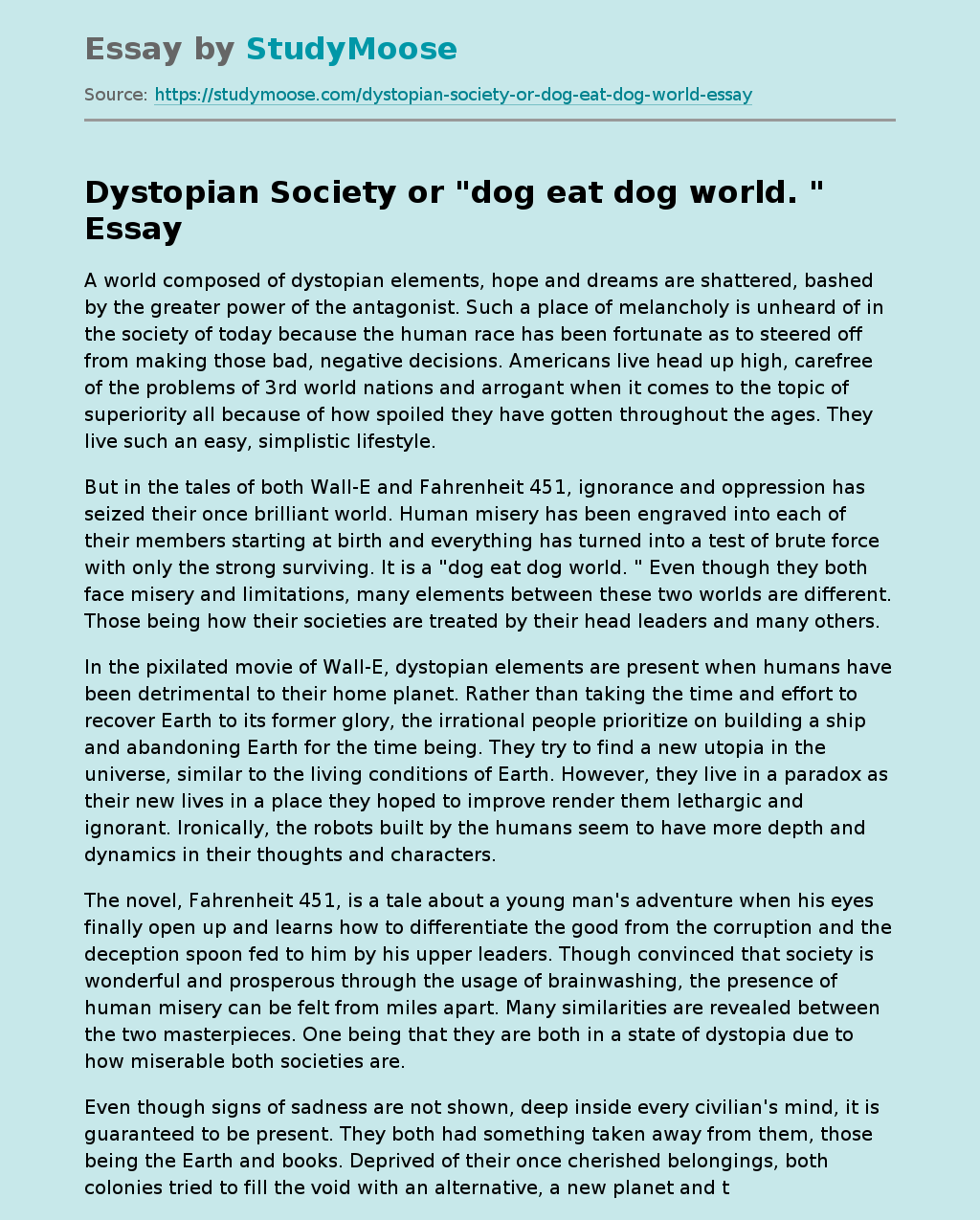