Reading the “Dumpster Diving” essay put me in the perspective that we throw away a lot of different things that may seem like junk or trash to us. However, “one man’s trash is another man’s treasure,” and what may be trash to us is the way of life for someone else . Lars Eighner describes his experience in dumpster diving, and while doing so, he makes a comment in the essay to say he would prefer to call dumpster diver “scavenging.

Don't use plagiarized sources. Get your custom essay on
“ Dumpster Diving ”
Get custom paper
NEW! smart matching with writer

” Eighner writes this essay to tell everyone about his years he spent on the streets along with his dog Lizbeth. Eighner started to dumpster dive a year before he ended up homeless due to his savings becoming depleted. Eighner starts to recognize what foods are safe to eat dumpster and what items he could fix up to keep that would be useful. He talks in a very laid-back tone as though it’s okay to dumper dive. He speaks as if dumpster diving is a better way of living than the modernized world.

In a way, Eighner tells us how wasteful we are in the world. Once I read this essay, I was convinced that we do waste a lot. It made me think of how much food we through away because it isn’t what we wanted or not cooked right. I believe we would never really see it in Eighner’s point of view until we actually have to live with or experience dumpster diving.

Although the essay was telling the audience about his experience of dumpster diving, he managed to completely avoid the emotional side of it.

It kind of seems as though he was giving the reader the basic tools needed to use for dumpster diving. In a weird way Eighner seems to be talking to two different sets of people. He addressed people who were already exercising dumpster diving living and people who were wondering what it would feel like to be a dumpster diver. Eighner also writes about what he discovered while dumpster diving. With me being a college student, the fact that Eighner learned that, “students throw out many good things, including food,” stuck out to me the most (Eighner). As a freshman in college, I find myself eating most of my food because I know that I don’t have money to waste. Also when it comes down to throwing out other items, I tend to try and use whatever it may be to its fullest potential before throwing it away. I can trust that Eighner knows what he is talking about because he actually lived the dumpster diving life for years.

As the essay progressed, Eighner went deeper into detail about dumpster diving and his discoveries. He talks about what’s safe to eat and what’s not safe to eat. He even describes where the good places are to find food and where to stay away from in the dumpster. In another part of the essay, Eighner goes into detail about some divers being hoarders and having a lot of junk, but in the eyes of a diver “every bit of glass may be a diamond, they think, and all that glisters, gold” (Eighner). The author talks about the can scroungers and how they are people who “must have small amounts of cash. These are drug addicts and winos, mostly the latter because the amounts of cash are so small.” He also talks about how they pass all the food and good items just so they can get to the can for money. Eighner discusses how he doen’t go through individual garbage cans because “houses and duplexes don’t move as often and for some reason do not tend to discard as much useful material.” He states that he feels “sorry for them.” I feel as though he is trying to say that we are missing out on life with us wasting so much.

Dumpster Diving. (2021, May 07). Retrieved from https://studymoose.com/dumpster-diving-essay 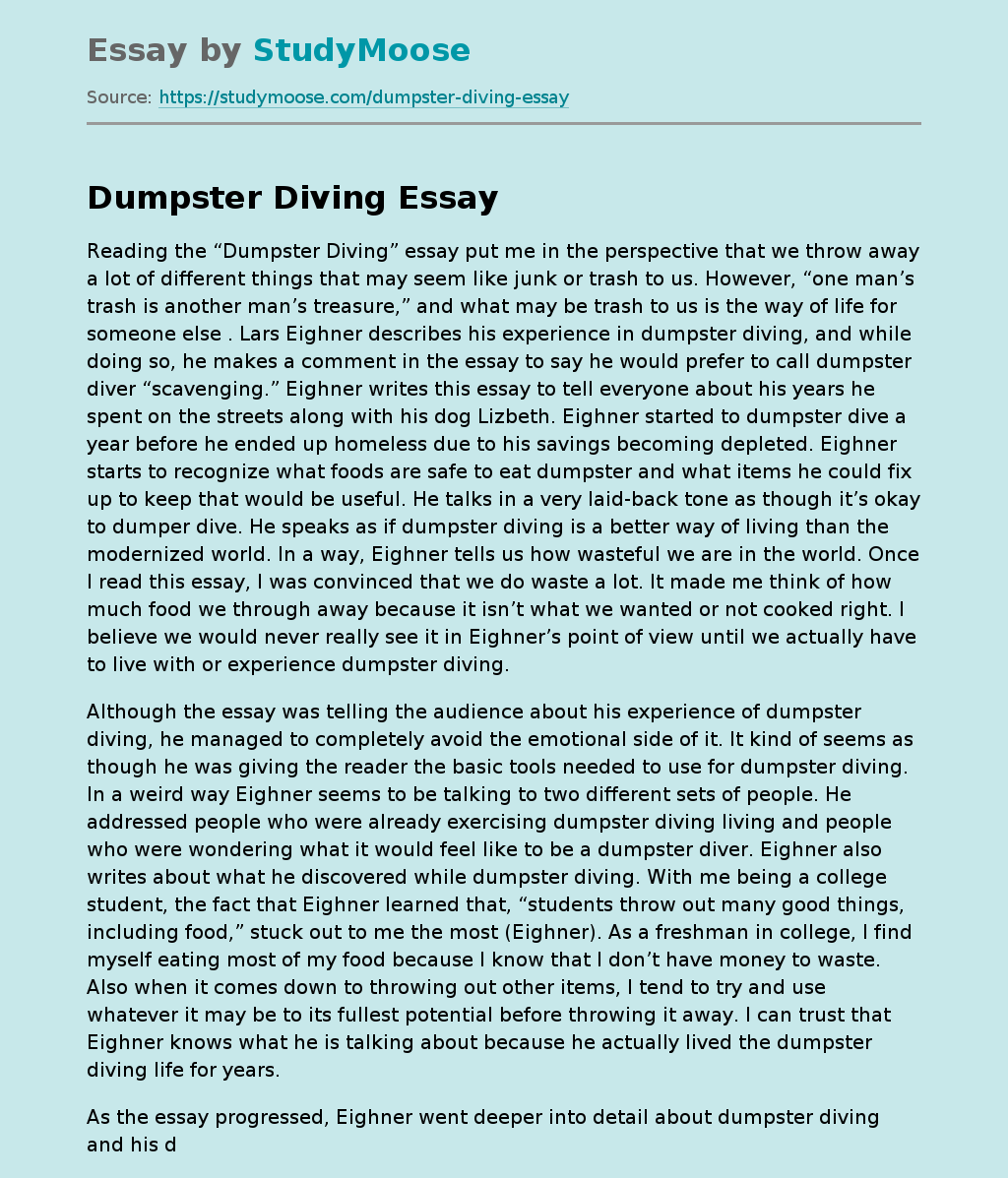