Dulce Et Decorum Est was written by Wilfred Owen during World War I and is a war poem focusing on the horrors of war; the conditions of the soldiers, the wars impact on those whom remain alive and war not being glorious. Owen, a soldier of WWI and who had experienced the pain, loss of lives, and extreme conditions of war, lives to recount this poem to a wide range of audience in the format of a rhyme scheme abab, cdcd, efef, ghgh and so on.

Don't use plagiarized sources. Get your custom essay on
“ ‘Dulce Et Decorum Est’ by Wilfred Owen or Trip through First World War ”
Get custom paper
NEW! smart matching with writer

Owen’s use of modern diction and anti-war belief suggests the poems purpose, to shock the reader and move them away from the popularly believed image of war being glorious.

The poem Dulce Et Decorum Est has seven quatrains. In the first and second quatrain, Owen establishes the war-like atmosphere, giving phrases such as “like old beggars under sacks”, “men marched asleep”, and “drunk with fatigue”, which strongly provides the readers with vivid pictures of soldiers pushing forward in slow and controlled pace despite the extreme and harsh conditions they are confronted with.

The third Quatrain establishes a change in atmosphere where the weary soldiers suddenly becomes alert, a change in pace through the use of short staccato words, “Gas! Gas! Quick boys!”The fourth, fifth and sixth quatrain is the poet’s further recount while the last quatrain concludes the poet’s belief on war.

The first stanza describes the opening scene of the battlefield. Owen conveys the tiring, sickening, haunting conditions of war to the audience using similes.

In the sixth stanza, Owen expresses the war having an impact on those whom remain alive, referring to himself. Owen recounts himself facing the death of his friend, seeing the blood ‘gargling from the froth-corrupted lungs.’ Owens disgust in war is shown through the metaphors, “obscene as cancer, bitter as cud.” These metaphors demonstrate the vivid images of blood and the impact war has on the poet himself and those who live to tell about War.

“..incurable sores on innocent tongues.”The phrase ‘innocent tongues’ in line 26 is Owen’s use of Personification since the word ‘tongue’ is given a human quality of being ‘innocent’. Here, the audience acknowledges the soldiers being innocent. These soldiers were once “children ardent for some desperate glory,” brainwashed into the sacrifice of lives in harsh conditions.

In the last stanza, Owen concludes his argument by suggesting that war is not glorious. Owen believes that war does not come from ‘desperate glory’ nor does it come from “Dulce et Decorum est pro patria mori” which means ‘it is sweet and proper to die for your country’, a lie which the elders had came up with. Owen’s argument against War contradicts the title of this poem Dulce Et Decorum Est and is in the form of irony. The depiction that soldiers stand tall and strong is opposed to in this poem, thereby given the effective use of irony to engage the audience on Owens debate that war is neither glorious nor noblest and those who support War are disrespectful to youth.

Owen confronts the audience as a ‘friend’ in the beginning of the last stanza to enhance the relationship with the audience, this form of colloquial language will encourage the audience to believe that glory does not come from war since it is an account from a person who has actually experienced war. War will only destroy innocent lives and impact further on those who survive from war.

Dulce Et Decorum Est is an incredible poem written about the stupidity of war and the terrible conditions the soldiers face, these ideas being explored by the uses of diction, metaphors, similes and paradox, irony.

The relevance of the poem, Dulce Et Decorum Est with the present is what makes this poem the all time classic and another collection to Wilfred Owens WWI literature. 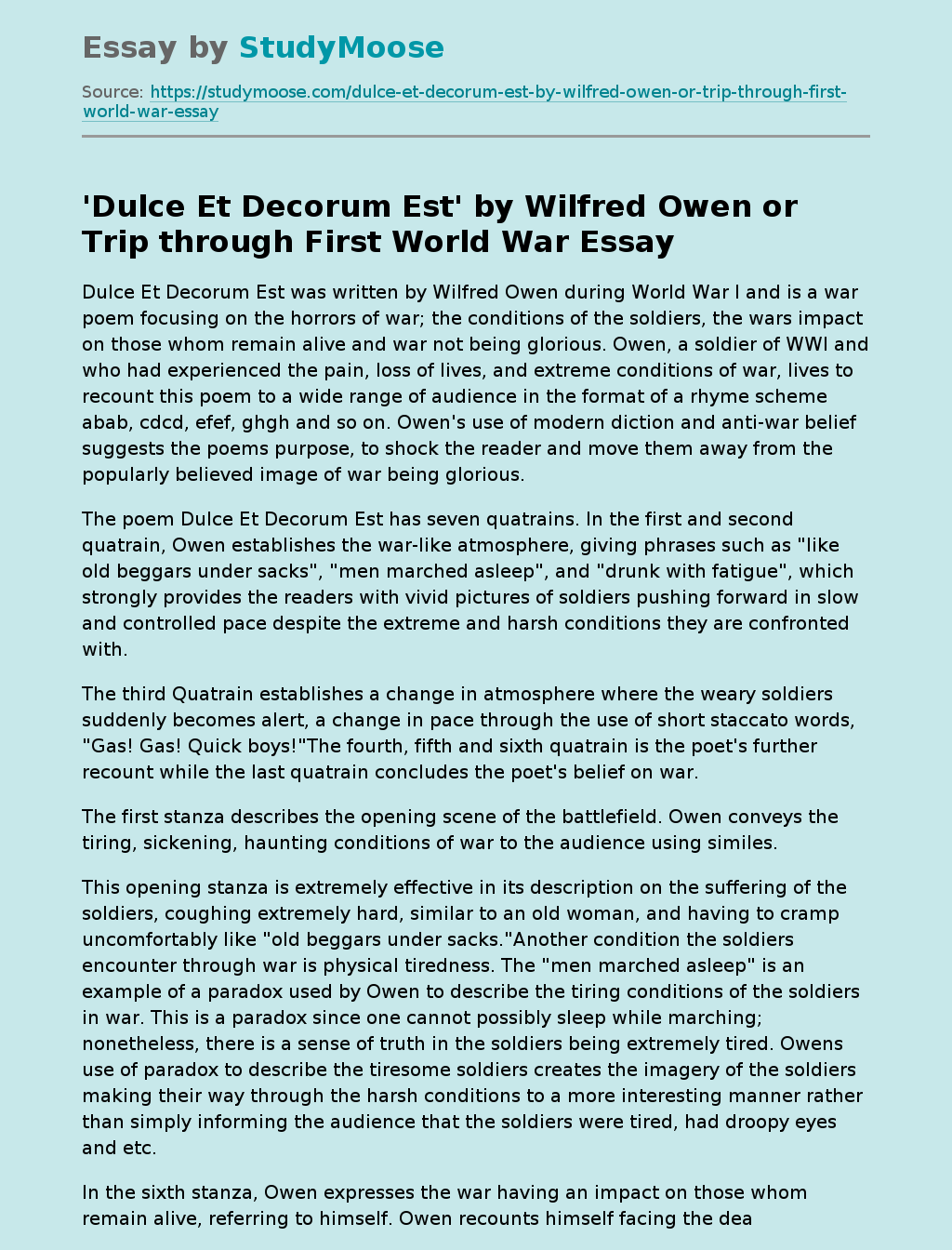