Summary – “Dry White Season” Adam Simon – CGW 4U1 Dry White Season was what I felt to be an exemplary interpretation of how native South Africans truly condemned the immoral Apartheid political system of the mid 1900’s. Though the film was quite graphic, explicit nature seemed necessary to prove how racial brutality towards the black community really did exist. I enjoyed the whole idea of a narrow-minded white man making the transition from a life of socially superior racial prejudice to become a devoted supporter of black rights.

I found this really helped create a strong liberal message to aid viewers in understanding the sick intolerance of the majority of white South Africans at that time. Racial separation was clearly evident to me while watching this video, as I noticed blacks being forced into their own “homelands” which retained a much more compact living than the whites, as well as Afrikaans being sub-divided into smaller ethnic groups to make whites appear to be the largest authority in South Africa.

Blacks outnumbered whites 6 : 1) I think A Dry White season illustrated very well how the whites compromised such a small portion of the country, yet ultimately dominated the South African government, recourses, and economy. I really liked the use of indirect symbols to cleverly make points throughout the movie. For example, the white boy and the black boy happily playing together in the beginning was a interesting way to foresee an ideal future for South Africa that was obviously non-existent at that time.

Also, Susanne slipping on her sunglasses was a clever way to show how whenever she was given opportunity to contradict the Apartheid, she simply ignored it.

This represented her blindness from the truth well, and how she was ultimately hiding from the light of reality. The film became somewhat predictable as we were given more and more insight into each character though. All main characters seemed to follow the generic arrangement that is seen in various other stories that result in a strictly complete and final moral.

Benjamin is the hero; the incoherent individual that learns an unpleasant lesson due to one event that changed the course of all events prior, (Gordon’s death) Captain Stoltz was the villain; the sadistic, power hungry oppressor with manipulative ways that ended up determining his fate, Johan represented the loyal and resourceful character that led the viewer to believe there was a shed of hope throughout any struggle, and Stanley was the character I’ve seen way too often, the random bystander that provides the cathartic release by ultimately giving the villain what he deserved.

Despite some predictable qualities, the characters were still interesting. I thought Donald Sutherland played the part of Benjamin superbly. His air of seriousness and integrity really keep me interested in his character. Sure, he was naive before the death of Gordon, and it was “best to just let it go” at first, but he grew from being pessimistic and cynical, to an entirely optimistic, likeable person to me the end by going neck deep into the mystery of Gordon‘s disappearance.

My favourite character of all though, was no doubt Mr. McKenzie. Though he only was vaguely present, he absolutely dominated the screen during the courtroom trial. I found his use of sarcastic remarks in the courtroom hilarious, yet so fittingly applicable to his realist character. He clearly is a trail blazer in the sense that he is a white man fighting for black rights, yet he does so anyways, just to wittingly prove his point so well. This film helped me see how cynical the South African government really was.

Their response to any criticism was basically that they had their own right to pursue its own domestic policy as it sees fit. I though it was interesting how South Africa was also quick to point out how blacks in South Africa had the highest standard of living amongst all blacks in Africa. It’s ironic that they do not admit that this is still an absolute garbage living standard, and blacks here were still innocently imprisoned and couldn’t even educate themselves in English to gain better chances at surviving in the workforce.

Countries like Canada could do a number of things to show their unacceptance of Apartheid policies. First, they could employ trade sanctions against South Africa and refuse to remove these sanctions until all Apartheid policies were destroyed. Also, they could remove South Africa from major events such as the Olympics (recently in Vancouver, Canada) and furthermore decline their entry until these policies are abolished. Canadian business people, activists and clergy also played parts in bringing about all-race elections in 1994, and a surprisingly peaceful end to apartheid.

I think Canada is also involved in major discussion at UN and related meetings, which allows them to converse with other countries along with adding innovating suggestions of their own, to help diminish racist policies altogether. As a whole, after seeing this movie for the second or third time now, I can honestly say I have a sincere appreciation for what black South Americans went though in the apartheid times, and that I entirely oppress any association with these obscene policies. 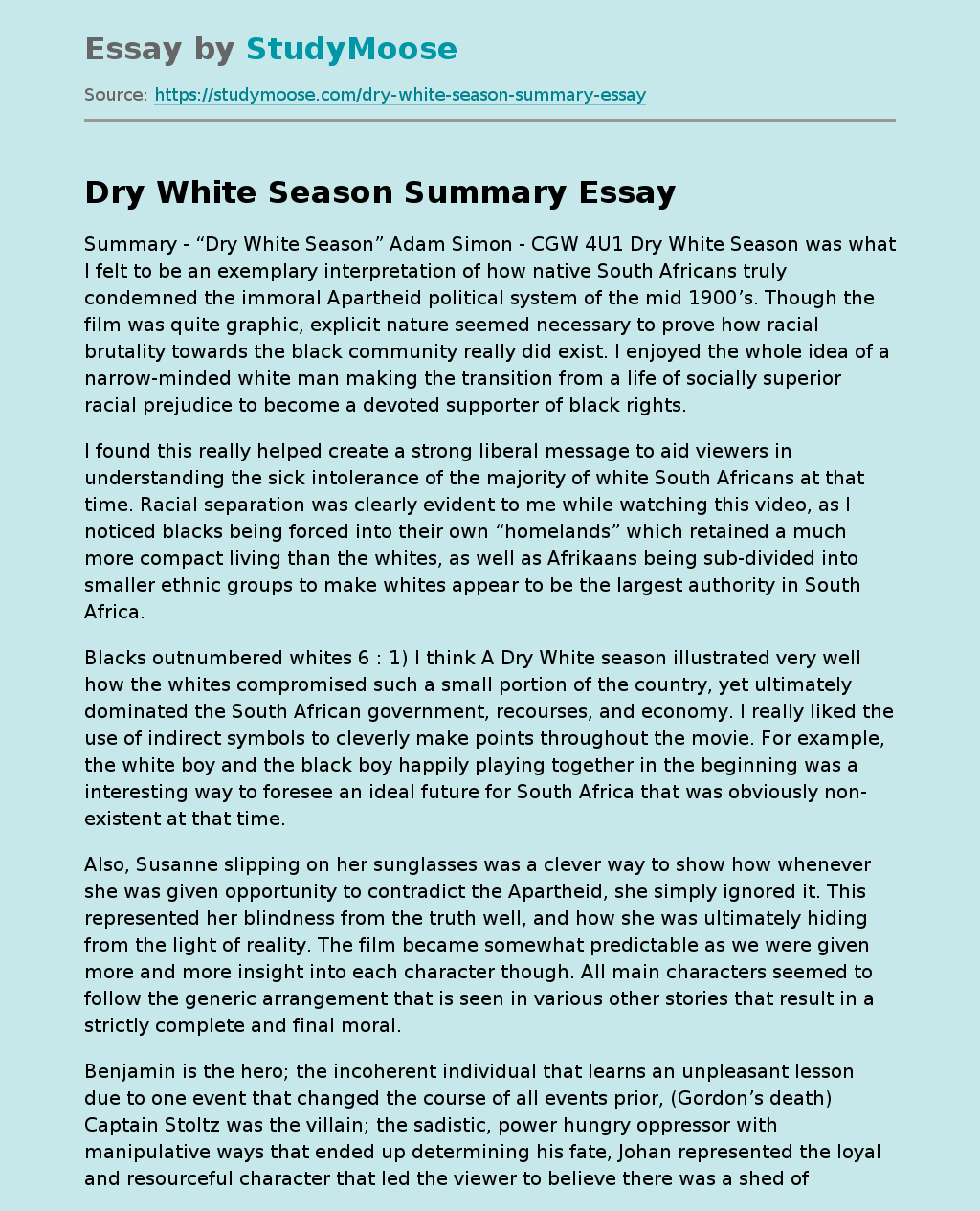