Vehicular crashes are the leading cause for death in teens in the United States. Here are some facts: •In 2009, one in three teenagers died from motor vehicle crashes. •In 2009, 3,000 teens died and 350,000 were taken to the emergency room for crashes. •In 2006, males were almost two times more likely to crash then their female counterparts. These facts may be terrifying, but they need to be recognized for a more strict yet fair opportunity for a driver’s license. The question most teenagers ask is, “Why must we have a graduated license? This comes from teenagers who think that they are untouchable and impossible to be hurt in severe ways.

Don't use plagiarized sources. Get your custom essay on
“ Drunk Driving ”
Get custom paper
NEW! smart matching with writer

Depending on population, teenagers should be allowed to take driver’s education at a younger age. For example, in Wyoming there are only 5. 8 people per square mile. This allows for less of a chance of a crash so people at 13 and 14 should be allowed to learn to drive, albeit in California there are 234 people per square mile, making it a lot easier to get in a car accident than that of a state with less people.

Using this method would be a lot less complicated and it could cut down on accidents. What certain teens don’t understand is the seriousness of owning a vehicle and being responsible for the life of the teen and their friends and family. Too many teens today think that life is a Nintendo game where if something bad happens that they can just hit the reset button and everything will go back to the way it was.

With an attitude like this the concern for driving a car is shot down and wrecks happen more and more often.

Wrecks in teens happen for various reasons. Sometimes accidents happen and you just cannot get out of the way of a car wreck, but sometimes teens have too many people in the car and to show off to their friends they pull crazy stunts and the chance for a wreck increases. Drunk driving is also a huge factor in teen fatalities in car wrecks by teens who don’t really know what the limit for drinking is and that if they are buzzed that they are technically not drunk so they cannot get in trouble.

The problem with this is that teen drinking is illegal and should not be done to be buzzed or drunk because drunk driving and buzzed driving are the same. Teen driving can be an important part of a teen’s life, but if a parent really wants their teen to drive then they should talk to them and teach them correct driving techniques and postures to insure that wrecks will be cut down. It is up to parents and teenagers to save us from wrecks and if a parent teaches them correctly then they will have a better chance of seeing their teen grow up to be an adult. 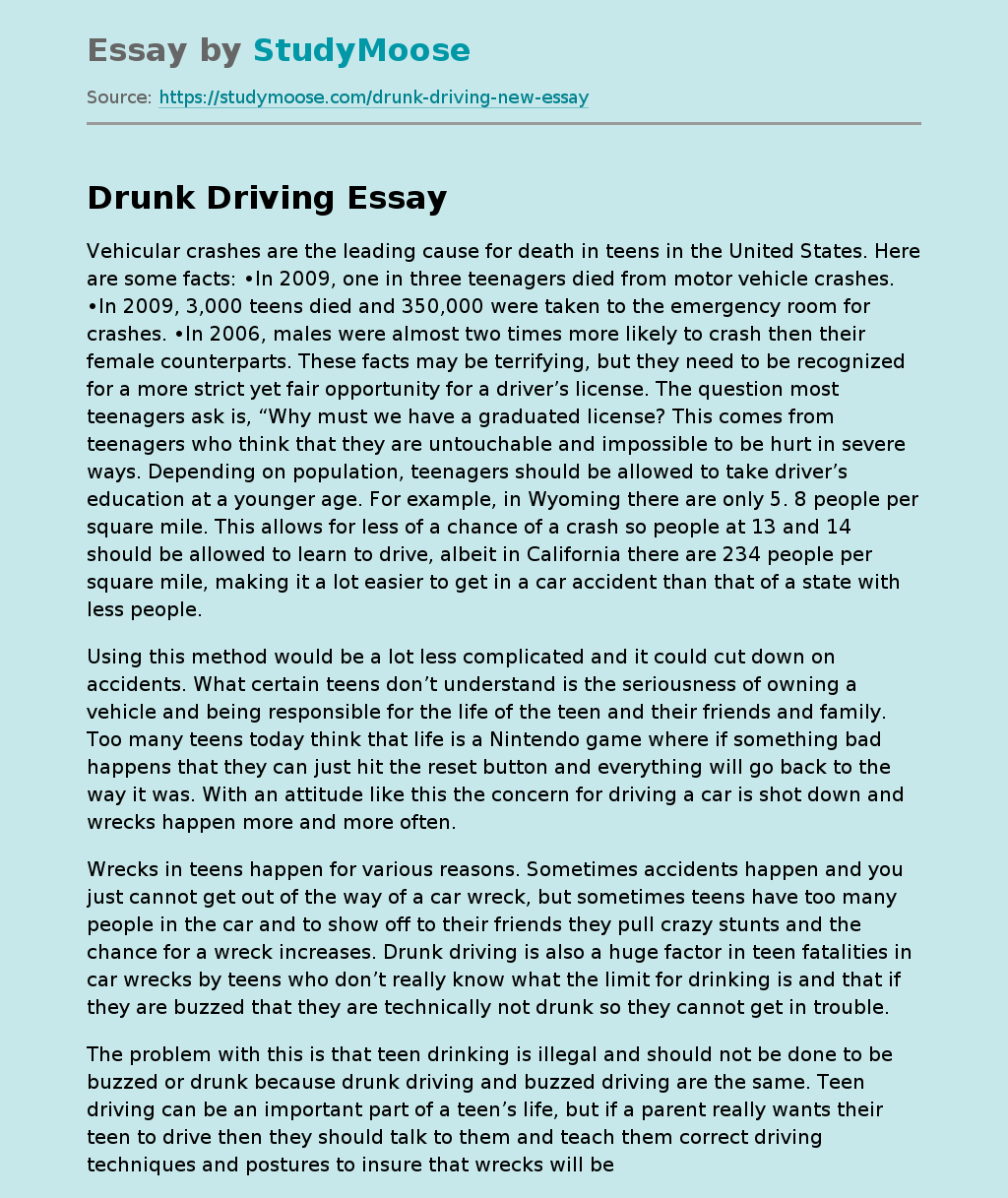