Do Drugs Have Religious Import

After reading “Do Drugs Have Religious Import” by Huston Smith, it is my belief that drugs do have religious import. Hylosenegetic drugs like mushrooms, marijuana, LSD, and acid have been proven to open ones unconsciousness. Things that otherwise, are not able to comprehend, while in a sober state are introduced. The Native American (Indian) Church and Mexico’s 2,000 year old while on “sacred mushrooms,” ministered to Aztec as “God’s flesh. ” In the King James Bible it talks about drugs, more specifically Marijuana.

Don't use plagiarized sources. Get your custom essay on
“ Do Drugs Have Religious Import ”
Get custom paper
NEW! smart matching with writer

Mentioned in Geneses 1:29: God said “behold, I have given you every herb bearing seed, while upon the face of all the earth, and every tree, in the fruit of a tree yielding seed, to you it shall be for meat. ” And pot is also listed as an incense tree in the Old Testament. Islam prohibited all drugs that are not medically scribed. “And make not your own hands contribute to your destruction” (Surah, Al-Baqara, two; 195). While Satanism aspects and promotes the historic evidence that drugs where use for religious and ritual purpose.

Like opium marijuana and heroin and so forth,” LaVeyan Satanism. Normally, a phenomenally trip or experience all depend on three things; the drug, the set and the setting. No religion is known for repeatable, reliable experiences, meaning that these experiences are based off individual encounters and cater to one’s faith and circumstance. Therefore, under the influence of these drugs that prove open-consciousness and given the right set and setting then I do believe one could in fact have a very real and personal encounter with the God or religion of their choice.

In California there is a Christian based faith church called “Temple 420” in California that does in fact holds services on Saturdays and Sunday’s beginning at 420. This church also promotes, sells and speaks on marijuana being an herb of God that should be used and also utilized just as we use mango trees for food or cotton plants for clothing. Psychedelic experiences affect and explore the mind in ways the result in the experience being qualitatively different and superior from that of ordinary consciousness.

The term psychedelic doesn’t just pertain to drugs; psychedelics can also be a state of meditation or yoga. Under psychedelic drugs the senses are heightened; colors become seemingly more vibrant, sounds become more emotionally profound, and touch seems more exotic and sensational. Given the simple differences in the senses this would naturally cause a greater religious experience based on senses alone. Some describe the trip of a psychedelic as fantastic and vivid, bringing significance to things that on ordinary bases would be easily over looked and taken for granted.

Feelings also become magnified; love, anger, joy, pain, content, or loneliness may become overwhelming and overbearing. These feelings may be those of which during a sober state of mind would be mere passing thoughts and seem insignificant while under psychedelics they become pertinent and important. Philosophically I believe most “religious” people reject the evidence of psychedelic drugs because of the fear of the unknown. This is ironic when you look at the basics of all religion you will find in bold letter “FAITH” and by definition faith is the belief in things unknown.

Polanyi attributes this closed-mindedness to “lack of a conceptual framework in which their discoveries could be separated from specious and untenable admixtures” (Smith 1). Many would argue that much of the Old Testament is considerably psychedelic. In the King James Bible Colossians 2:8: “see to it that no one takes you captive through hollow and deceptive philosophy, which depends on human tradition and the element spiritual forces of this world rather than on Christ. In Buddhism they have the equivalent of a bible called the Holy Quran, in the Quran it says “do you not see that Allah sends down from the clouds water, and then brings fourth with its fruits of different kinds. And in the mountains there are streaks, white and red, of different colors, and some intensively black. And of the people and animals and cattle there are different colors likewise. Only those of His servants fear Allah who possesses knowledge” (Holy Quran 35:27-28). Houston Smith’s essay he states “like every other form of life, man’s nature has become distinctive through specialization.

Man has specialized in developing a cerebral cortex. The analytic powers of this instrument are a standing wonder, but it seems less able to provide man with the sense that he is meaningfully related to his environment, to life, the world and history in their wholeness” (Smith 1). This quote easily sums up his view on Drugs and religion viewed philosophically; Smith in other words is saying that man cannot fully understand how important and strategic his existence truly is to not only him and those around him but to the environment.

This is similar to the functionalist’s perspective on things being a function in society, each small part enabling a larger portion to operate. Evidence from numerous sources has proven that psychedelic drugs open a new form of consciousness that does in fact allow for out of the ordinary experiences to occur. So why is it so unheard of for religious experiences to be any different? As previously stated, most religions are based so heavily on faith (the belief of things unknown). “Churches lack faith in the sense that was just mentioned, hipsters lack discipline,” (Smith 1).

It goes back to religion because god made the drug in the first place because he made everything but I know he did not intend to have it be used for harm or anything. It hears by that drugs do have a religious import. In conclusion, I think drugs do in fact influence religion historically, phenomenological, philosophically, and religiously. It is very apparent and evident that psychedelic drugs and experiences open the mind to outer consciousness not known to the sober mind. Evidence in the bible, Quran, and the article by Houston Smith all prove these theories.

Do Drugs Have Religious Import. (2020, Jun 02). Retrieved from https://studymoose.com/drugs-religious-import-new-essay 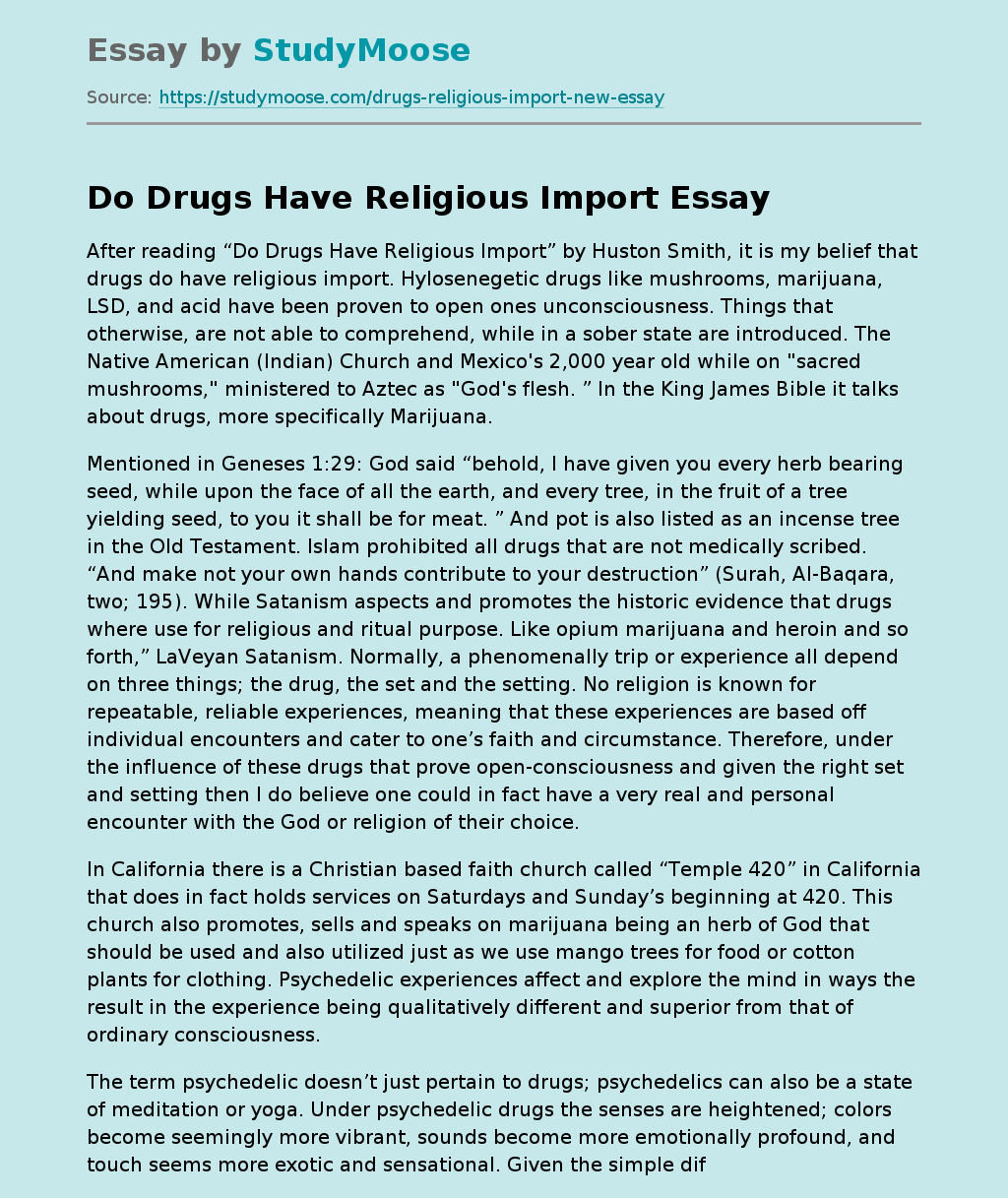