First, everyone can become a victim of drugs, whether they are illegal or legal. Even the author Aldous Huxley, wasn’t even able to resist drugs. In the 1950s, Huxley became popular for his interest in mind-expanding drugs like mescaline and LSD, which he seemed to take over a period of ten years. Sybille Bedford says, “he searched for a drug that allowed him an escape of himself and that it would be physically and social harmless, if it would be taken with care.

Don't use plagiarized sources. Get your custom essay on
“ Drugs in Huxley’s “Brave New World” ”
Get custom paper
NEW! smart matching with writer

Even though you can see that Huxley knew exactly what he was talking about when he described the experiences of people taking the drug Soma. In Brave New World only the two legal drugs exist, alcohol and Soma, even though alcohol can only be found in the reservation. In contrast to the book we find lots of legal drugs in today’s society that don’t seem like drugs. Things such as, alcohol, medicine, caffeine, nicotine, etc.

You won’t find any illegal drugs in the Brave New World of Huxley because all the drugs they take are ordered by the government. In our world however, there are many drugs that are illegal and if you get caught selling them or taking them you will most likely get in trouble. For example there is LSD, Meth, Cocaine, Heroine, Crack.

Next, Another difference between the two worlds is the attitude society has towards drugs in the New World and in ours. Society in Brave New World is used to taking soma by their first hypnopaedia lessons, where they are instructed what is necessary for the stability of their system.

The lower classes, e.g. the epsilons, deltas and gammas, take regular doses of soma every day. The upper classes can mainly choose on their own how much and how often they need to take soma to flee to the world they would like to be in.

In Brave New World society’s opinion, soma is something that belongs to everyone, and a without it they can’t survive. The ones who want to live without it have to accept a life as an “outsider” of society. In today’s society, legal drugs are mainly used to calm down,or forget about stuff, like cigarettes. As a kid you drink alcohol at parties or smoke with your friends. You also take medicional, and some people take anabolic substances to achieve better results in their athletic activities. Most illegal drugs are taken just to become high or to feed the dependence you’ve created.Society in our world is used to seeing people take legal drugs because they are allowed to be taken in public places. Illegal drugs, on the other hand, make you an outsider of society.The people in the New World get soma for free because it is, as already mentioned, all ordered and offered by the government.In comparison to that you have to pay for drugs in our world, and most of them have expensive prices that are only affordable to people with enough money.Legal drugs, however, aren’t as expensive as the illegal ones.This has the consequence that many people have to commit crimes and go into prostitution to buy the drugs they depend on. Yet each time they get what they want, they become more and more sick.Although everything for the people in “Brave New World” is great and everyone is happy and uninhibited if they get their lovely soma, they are also often dependent on the drug.Brave New World government supports soma to ensure passiveness of its people and thereby the stability of their created world. Alcohol, on the contrary, seems like an illegal drug in the New World because you become an outsider by drinking it, though it is not forbidden by the government.In our world legal drugs are tolerated by the government, but they are age-restricted.

All in all you might say both worlds wouldn’t work without drugs, which more and more people need to calm down with the help of drugs. People in the Brave New World have fewer things to get attached to then our society today, but you can see how much just two things can affect an entire world. 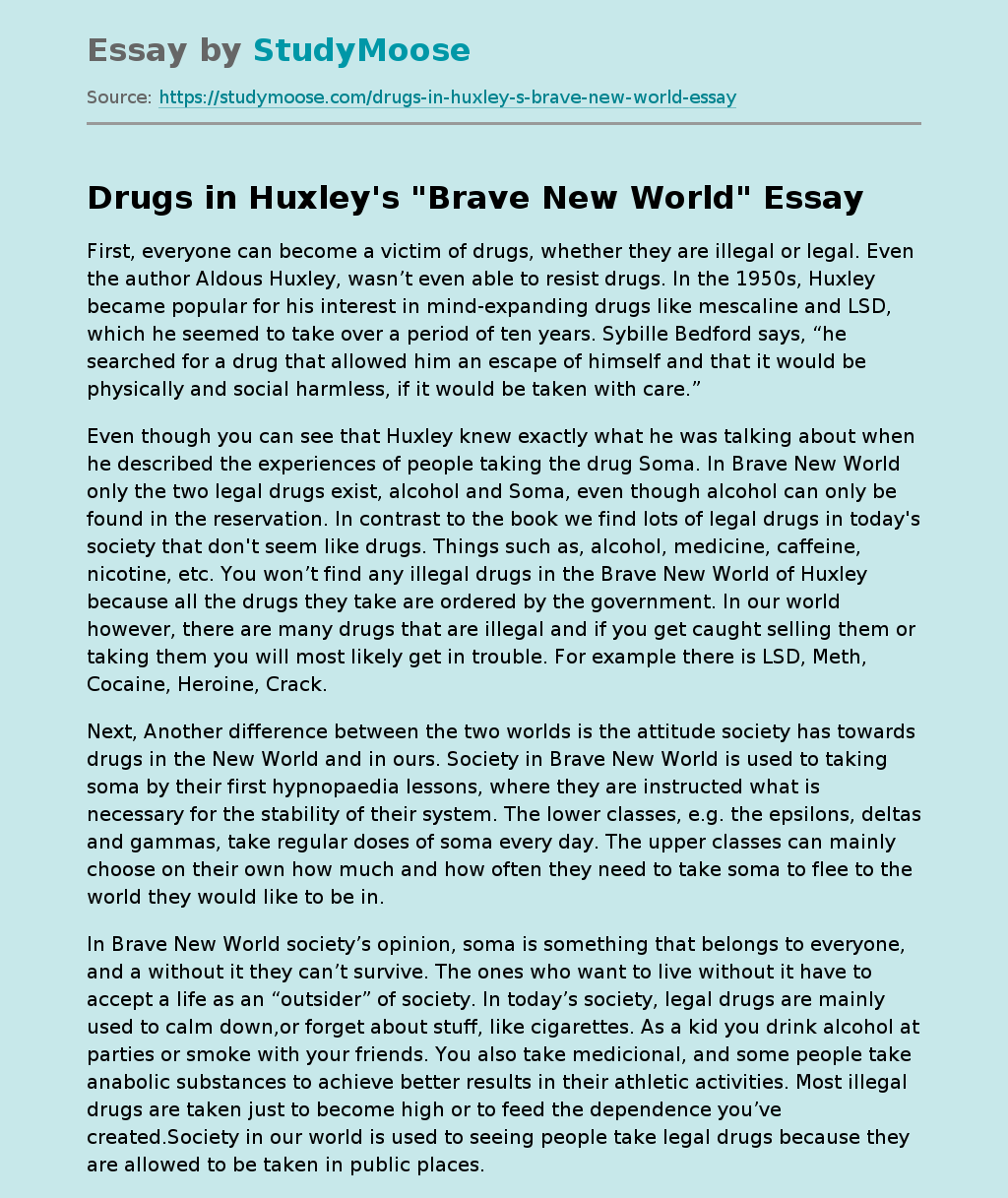