Drug Addiction Is a Growing Problem in Punjab

1) Throughout the border state of Punjab, whether in villages or cities, drugs have become a scourge. Opium is prevalent, refined as heroin or other illegal substances. Schoolboys sometimes eat small black balls of opium paste, with tea, before classes. Synthetic drugs are popular among those too poor to afford heroin.

2) The scale of the problem, if impossible to quantify precisely, is undeniably immense and worrisome. India has one of the world’s youngest populations, a factor that is expected to power future economic growth, yet Punjab is already a reminder of the demographic risks of a glut of young people.

Don't use plagiarized sources. Get your custom essay on
“ Drug Addiction Is a Growing Problem in Punjab ”
Get custom paper
NEW! smart matching with writer

An overwhelming majority of addicts are between the ages of 15 and 35, according to one study, with many of them unemployed and frustrated by unmet expectations.

3) For the Punjab government, the problem is hardly unknown. Private drug treatment centers, some run by quacks, have proliferated across the state, and treatment wards in government hospitals have seen a surge in patients. Three years ago, a state health official warned in a court affidavit that Punjab risked losing a whole generation to drugs.

Roughly 60 percent of all illicit drugs confiscated in India are seized in Punjab.

4) Yet when Punjab held state elections this year, the candidates rarely spoke about drug abuse. In fact, India’s Election Commission said that some political workers were actually giving away drugs to try to buy votes. More than 110 pounds of heroin and hundreds of thousands of bottles of bootleg liquor were seized in raids. During the elections, party workers in some districts distributed coupons that voters could redeem at pharmacies.

5) Punjab’s reluctance to treat the drug situation as a full-blown crisis is partly because the state government itself is dependent on revenue from alcohol sales. Roughly 8,000 government liquor stores operate in Punjab, charging a tax on every bottle — an excise that represents one of the government’s largest sources of revenue. India’s comptroller found that liquor consumption per person in Punjab rose 59 percent between 2005 and 2010.

6) A sociologist in Amritsar, surveyed 600 drug addicts in rural and urban areas of Punjab and found that they were usually young, poor and unemployed. He said that most villages did not have health clinics but did have three or four drugstores, which often made sizable profits selling pills and other synthetic drugs to addicts who cannot afford heroin.

7) Opium has a long history in Punjab, and was commonly and legally consumed here before India and Pakistan gained independence in 1947. Today, Punjab is a primary gateway for opiates smuggled into India from Pakistan and Afghanistan. Opium is also grown legally in India for medicinal purposes, and some of the crop arrives in Punjab on the black market.

8) The problem is prevalent in middle-class enclaves, where some users are hooked on heroin. One impoverished neighborhood of Amritsar, called Maqboolpura, is known as the Village of Widows — because so many young men have died of drug abuse.

9) In Kazikot Village, about a two-hour drive from Amritsar, a local nongovernmental organization tries to prevent the spread of H.I.V. by regularly distributing clean syringes to addicts. The group’s workers say there are 48 hard-core addicts in the village (out of more than 2,000 people) but that many other people use drugs. Government officials have sponsored “camps” here, with health officials providing antidrug information or trying to persuade addicts to undergo treatment — neither of which, villagers say, has been successful.

Drug Addiction Is a Growing Problem in Punjab. (2016, Sep 28). Retrieved from https://studymoose.com/drug-addiction-is-a-growing-problem-in-punjab-essay 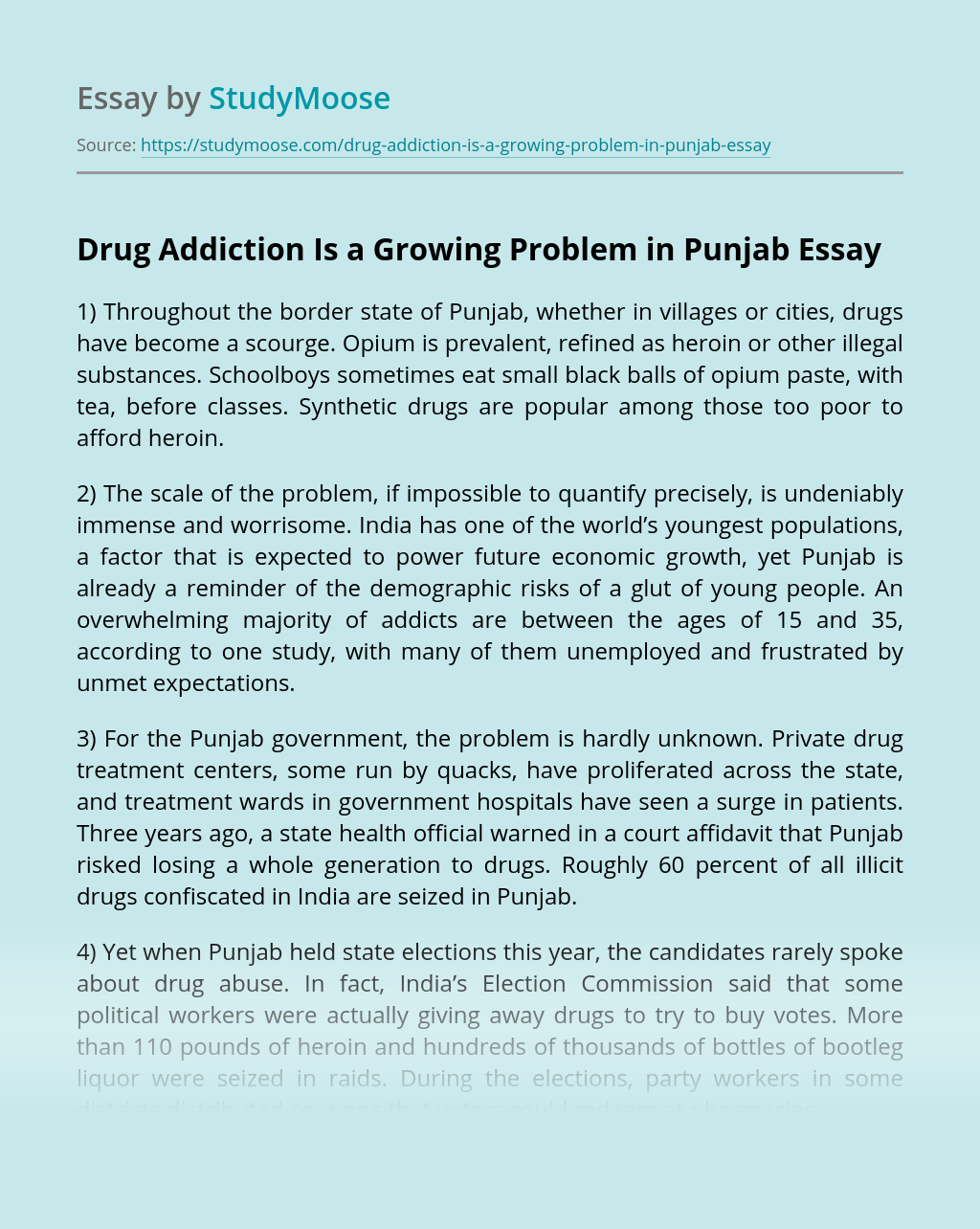