Drug addiction is not a recent problem in Bangladesh. But it has been rising. In recent years Drug Addiction has significantly increased in Bangladesh. This agent of human devastation has spread its tentacles worldwide and also in our country. Every intelligent and humane person in the world society and international organizations such as the UN and WHO are alarmed by the present rate of addiction. Nowadays nearly ten per cent of outpatients in our hospitals are cases of drug addiction involving heroin, ganja and phensidyl.

Don't use plagiarized sources. Get your custom essay on
“ Drug Addiction in Bangladesh ”
Get custom paper
NEW! smart matching with writer

These are generally youths and young men between 15-30 years of age and come from all strata of the society.

But there are adolescents below 15 years of age and men and women over 30. Hospital surveys show that average age of drug addicts is 22. The addicts are students, professionals, businessmen, laborers, rickshpullers and from other professions. Students are the most affected and drugs have caused deterioration in standards of education and students have also given up going to schools and colleges.

Even university’s professors are getting addicted recently. These addicts are turning to various criminal activities, in order to procure drugs.

World Health Organization (WHO) defines Drug; Drug is a chemical substance of synthetic, semi synthetic or natural origin intended for diagnostic, therapeutic or palliative use or for modifying physiological functions of man and animal. Drug impacts directly influence the economic and social aspects of a country and physically to a human body.

What is drug addiction?

The word addiction means getting habituated with something.

In case of drugs when a human body gets dependent on some stimulating things, and after a certain period it creates a habit which means that the body has become dependent on the stimulant which is addiction. World Health Organization (WHO) defines it: Drug is a chemical substance of synthetic, semi synthetic or natural origin intended for diagnostic, therapeutic or palliative use or for modifying physiological functions of man and animal.
Figure: drug addiction

A drug abuser can undergo different stages of tasting apart from normal lifestyle. Drug abuse can decay normal human senses through deep feelings. It creates different types of excitement both in the body and mind. Finally, it makes a person passionate to drugs. In the long run the user has to increase the dose day by day. Addiction has some stages.

a) Initial stage (starting): This is the first stage of drug addiction. At first, a person starts to take drug without concerning his body. At the early stage he takes it just normally, and gets the ordinary happiness, which makes him feel better. Sometimes, he wants to touch heavenly excitement and dreams himself as a floating constituent in the sky. This is the first stage of drug abusing. Amateurs are in this group. They take drug once or twice a week with their friends or seniors in their locality, who are already addicted. He collects it and processes it to take.

b) Pre-mature stage (the real test of drug): In this stage, drugs become a habit, and the abuser wants more. Feeling better s/he tries to increase the dosage drugs. It is taken at least 4-5 times a week. This is the primary stage for abusers in becoming addicted. At the initial stage they can easily manage or collect the money for purchasing. They collect money from their family, and sometimes from other sources. They take drugs with their friends. After a few days they need to take more and become dependent on it both mentally and physically. The sudden need for excess money, involves them in criminal acts like hijacking, and they feel thrilled to do it.

c) Mature stage: After the pre-mature stage abusers become seriously addicted. They have to take it every day, after a certain period. In maximum of cases it is taken from evening to night time. For that, they are busy all day long in collecting the expenditure of drug. They need much more money for it and sometimes they turn against the law. Many discontinue their education after failing to concentrate on any kind of discipline. They forget social protocol, always remain bad tempered and feel they are always in the right. They do not want to hear any advice and count themselves as very aware and competent. Sometimes they feel frustrated and even lose the will to live.

e) Decaying stage: After mature stage most of the abusers stay on the verge of decaying. It means gradually their lives crumble. They can realize, how imbalanced they are. They lose taste for food. At this stage they become fully dependent on drug, gradually after a few hours they have to take it, otherwise their body system stops. In that situation the abuser loses human characteristics and behaves like a monster. They have no sense to evaluate good or bad, to enjoy anything, they lose interest in normal male/female yeamings. And finally one day they fully surrender to drugs, which lead them to their graves. 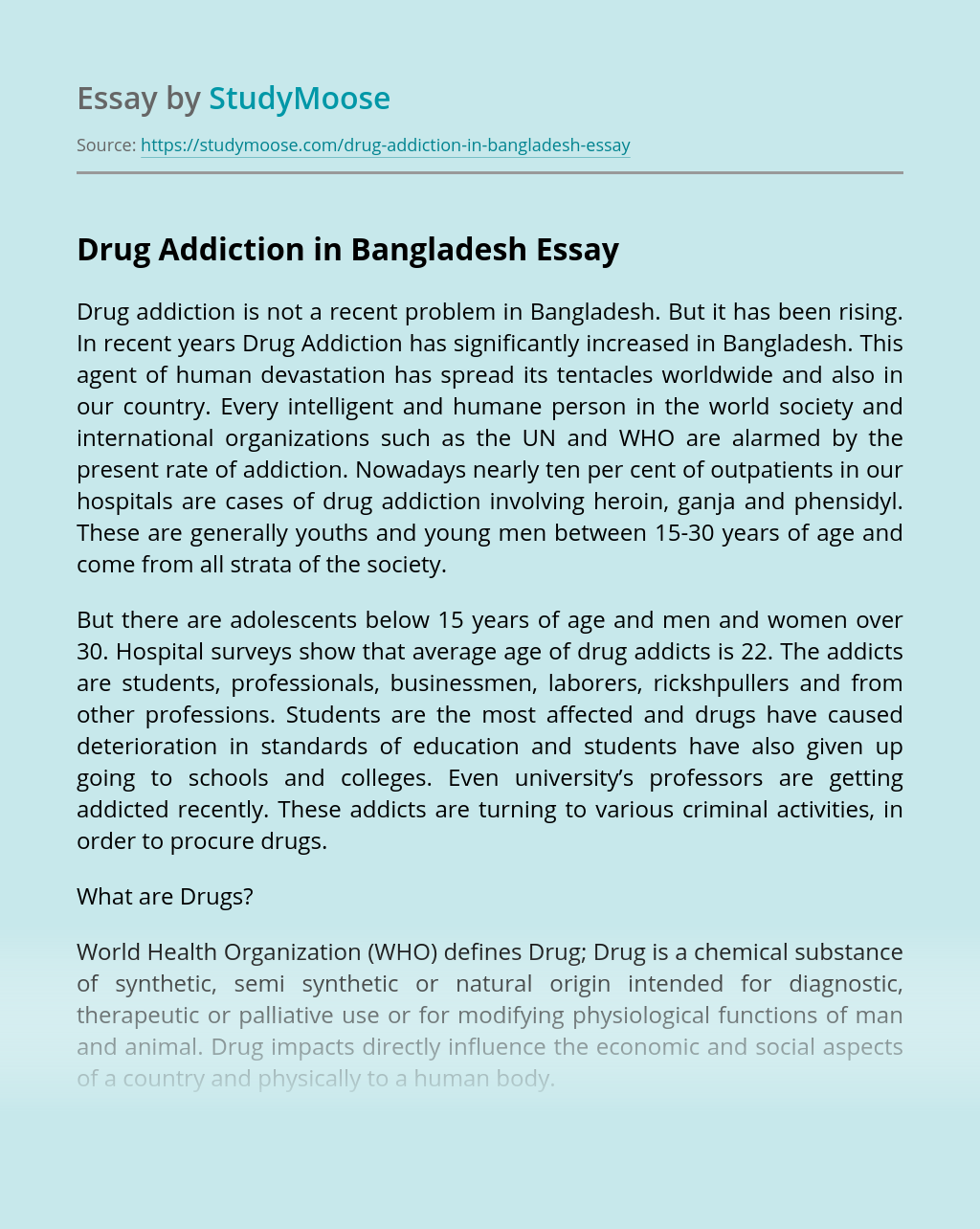