In some high schools dress codes are being suggested. Parents and teachers believe that changing the dress code could possibly improve the learning environments in the school. In contrast, dress codes should not be changed because parents have the responsibility to supervise what their children wear, the students will lose their individuality but not their behavior in any way, and finally the school staff should be strict to begin with.

Before parents start to ask for a change in other children’s wardrobe, they should first check what their child is wearing.

Don't use plagiarized sources.
Get Your Custom Essay on Dress Code Essay Just from $13,9/Page

This issue all begins at home and if the parent doesn’t see it then they shouldn’t be asking some other kid to change the way he/she dresses. As long as every parent enforced what their child wore, there would be no problem at school and the rules would be fine. Not every parent will do it, but for those who do care they should start to get rid of the inappropriate clothes that belong to their children.

If the parents would be responsible enough to see and limit what their child wore, there would be no need for a change in the dress code in the first place.

Enforcing a dress code would take away individuality but not change behavior. There are various “clicks” around a campus and that is what makes it diverse. Changing the dress code would discourage creativity and aesthetic values in students. People desperately try to stand out from the crowd and these rules restrict one’s fashionable rights. As a result, students just won’t change behavior and all of a sudden become thirsty for knowledge, the students will remain the same. There is no point in changing the dress code because it won’t work nor improve behavior in classrooms. The dress code would only limit individuality not personality.

The dress code should be enforced not changed. Instead of telling students to buy similar outfits, which some cannot, the staff should be more stricter in dress code policies. For example, in my school teachers and staff are complaining about how girls dress. However, I have never seen them actually punish them or warn them to not do it again. If schools were to enforce the rules they come up with everyone would know not to rebel against them. The students would keep in mind that they might be punished for doing something that is against the rules. When staff begins to reinforce their rules a decrease in rule breaking will occur. Therefore, changing the strictness of the rules will bring about a better environment not a change in dress code.

There is no need for a new dress code. Knowing that the parents and teachers could first change the ways they do things could help eliminate the thought of changing the dress code. Parents should limit what their children wear to respect the dress code already in effect. This will let the rest of the student body express themselves liberally and not have to give up their creativity and fashion sense. Staff should begin to enforce the rules to create the positive environment they want. Changing the dress code is the wrong alternative for an increase in academic potential. 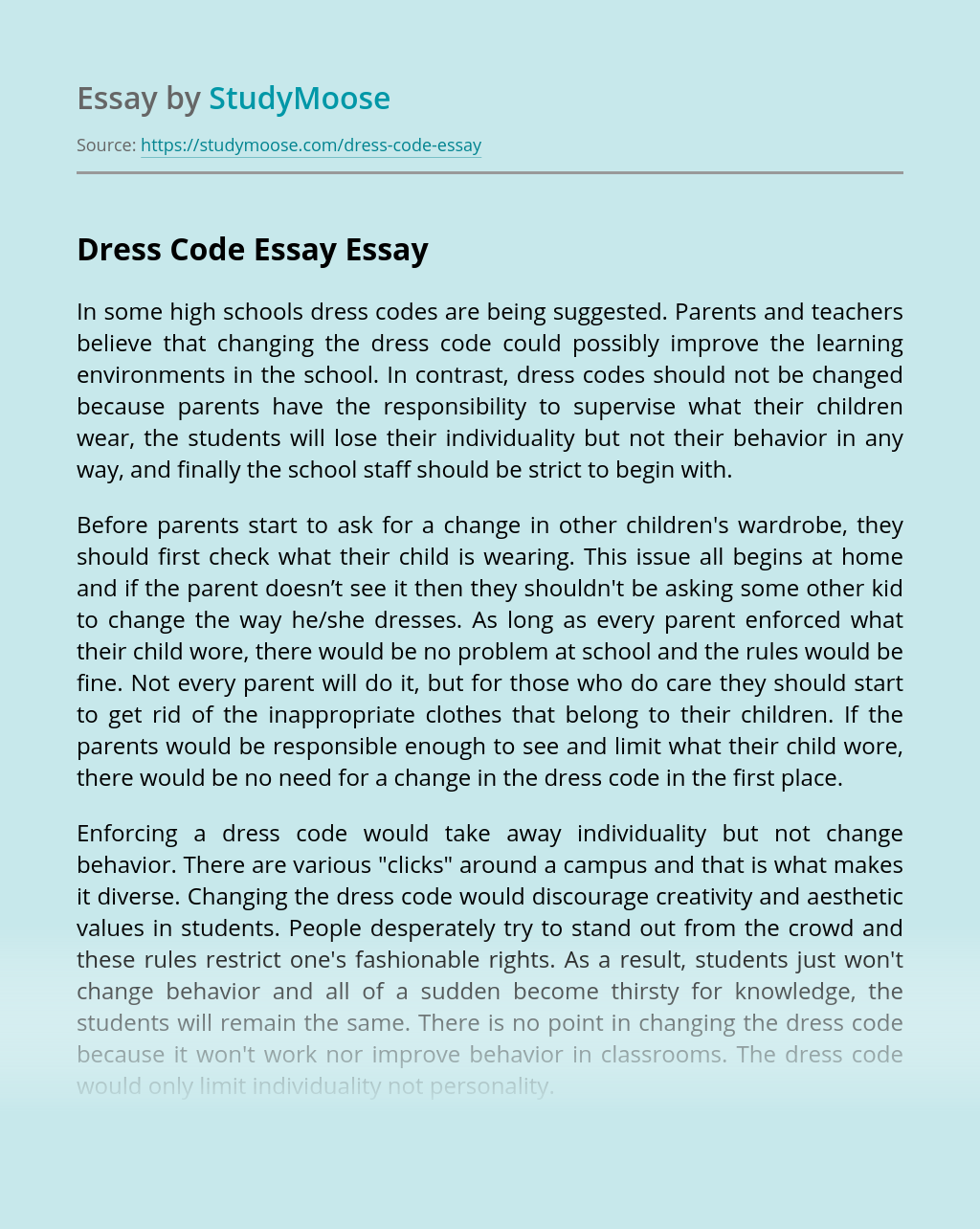 Healthcare reforms including Obama Care, formally named the Patient Protection and Affordable Care Act greatly impacts physicians and nursing shortages. There are several provisions which could direct impact physicians and nurses through incentives for potential recruitment, grants, training and retention. Through potential initiatives, the act may indirect effects that may question or present new reimbursement...

Mexico and Puerto Rico are two popular countries of South America. They share the passionate language of Spanish, though there are some differences in their dialects. There are similarities and differences between the two countries, such as expectations of family members and structuring, in addition to religious practices, traditions, and art. Both countries possess many...

James hazel eyes skimmed over the words for what he knew had to be the twentieth time. His pupils darted back and forth over the lines, dancing rhythmically as they flowed toward the bottom of the page yet again. James could feel his heartbeat quicken with each successive pass over the words. Small beads of...

Of the plays that survived the Hellenistic Era of Greece, few survive out of the thousands that were written in celebration of the Festival Of Dionysus. This festival was in honor of the great god of wine, a relatively new Olympian borne of Zeus and a mortal woman, Semele (Rachel Gross, Dale Grote, 1997). He...

Batas Militar. Commonly known in its English translation as “Martial Law”. As stated in the 1973 Constitution of the Philippine Republic that the Prime Minister as the Commander-in-Chief may declare Martial Law under the same conditions, “in case of invasion, insurrection or rebellion, or imminent danger thereof, the public safety requires it. The President however,...