Imagine, what is called the American Dream, acres of green grass all around you, a rushing river nourishing the little creatures that live nearby, and a ranch sitting on top of a tiny hill. This at the time of the 1930s is what every man could have ever wanted including George and Lennie. In the historical fiction genre, Of Mice and Men, By John Steinbeck shows the American dream in the perspectives of three very different characters, an ignorant man with a disability that causes him to act like a child, a sharp quick-witted man who knows the truth of reality but does not want to admit it, and I discriminated against the man who knew from the beginning of the harsh reality of this cruel world in order to display the inevitable failure of the American dream.

Don't use plagiarized sources. Get your custom essay on
“ Dreams versus Reality ”
Get custom paper
NEW! smart matching with writer

Lennie, one of the protagonists in the novel who faces a disability acts like a child although he is a grown man.

Lennie shouts to George “ tell about what we’re going to have in that Garden in about the rabbit in the cages about the rain in the winter and the stove”(Steinbeck 14).

Lennie just wants to live a simple life with the rabbits, with his ignorant mind, and with an awareness of the world around him. As mentioned beforehand, Lennie has a disability in which he acts like a child causing harm to those around him, especially his fatherly partner George.

Lennie later on after having this talk with George ends up killing a puppy he was supposed to take care of, and also murdering the wife of the ranch boss’s son.

Causing so much harm so that the only way for him to go on his death. his partner George, then ends up killing him showing that you can never get the dream he wanted. George, another protagonist all of the novel, is a sharp, quick-witted, idealistic man. In the beginning, he was hoping to finally experience the American dream but realize soon that it was just inevitable. Despite his gruff exterior, he believes in the vision of a future farm that he tells and retells to Lennie.

George said “ we’ll have a big vegetable patch and a rabbit hutch and chickens. And when it rains in the winter, we’ll just say the hell with goin’ to work”(Steinbeck 14). George at first dreams of the all-known American Dream, but once Lennie gets in all kinds of trouble he realizes that he will never be able to catch his dreams. He longs for the day when he can enjoy the freedom to leave work and live with the thought of living in safety and comfort with Lennie, free from people like Curley and Curley’s wife, who seem to exist only to cause trouble for them. Lennie is largely responsible for George’s belief in this safe haven, but eventually, the predatory nature of the world asserts itself and George can no longer maintain that belief.

By shooting Lennie, George spares his friend the merciless death that would be delivered by Curley’s lynch mob, but he also puts to rest his own dream of a perfect, fraternal world. Crooks is a lively, stablehand African American who gets his name from his crooked back and had been discriminated against all his life for his race. He knows from the very beginning that daydreaming of the American Dream will only waste his life away and although could give hope, the vision is unrealistic. Crooks replied angrily, “You’re nuts,” said Crooks. “You’re crazy as a wedge. What rabbits you talkin’ about?” “The rabbits we’re gonna get, and I get to tend ‘em, cut grass an’ give ‘em water, an’ like that.” “Jus’ nuts,” said Crooks. “I don’t blame the guy you travel with for keepin’ you outa sight.”

By segregation Crooks stayed in a separate house than those of white men, and he admits that he does get lonely. What Crooks want more than anything else is a sense of belonging and to enjoy simple pleasures such as the right to enter the bunkhouse or to play cards with the other men. This desire would explain why, even though he has reason to doubt George and Lennie’s talk about the farm that they want to own, Crooks cannot help but ask if there might be room for him to come along and hoe in the garden. The theme of dreams versus reality, the truth is that it never comes true.

Again and again, those who believe in faith from this vision are evidently failed in the end. Lennie, George, and Crooks all wish for untarnished happiness, and the freedom to fulfill their desires. George and Lennie’s dream of owning a farm, which would enable them to sustain themselves, and, most important, offer them protection from an inhospitable world, represents a prototypically American ideal. George then awaken to the impossibility of this dream, sadly proving that the bitter Crooks is right: such paradises of freedom, contentment, and safety are not to be found in this world. 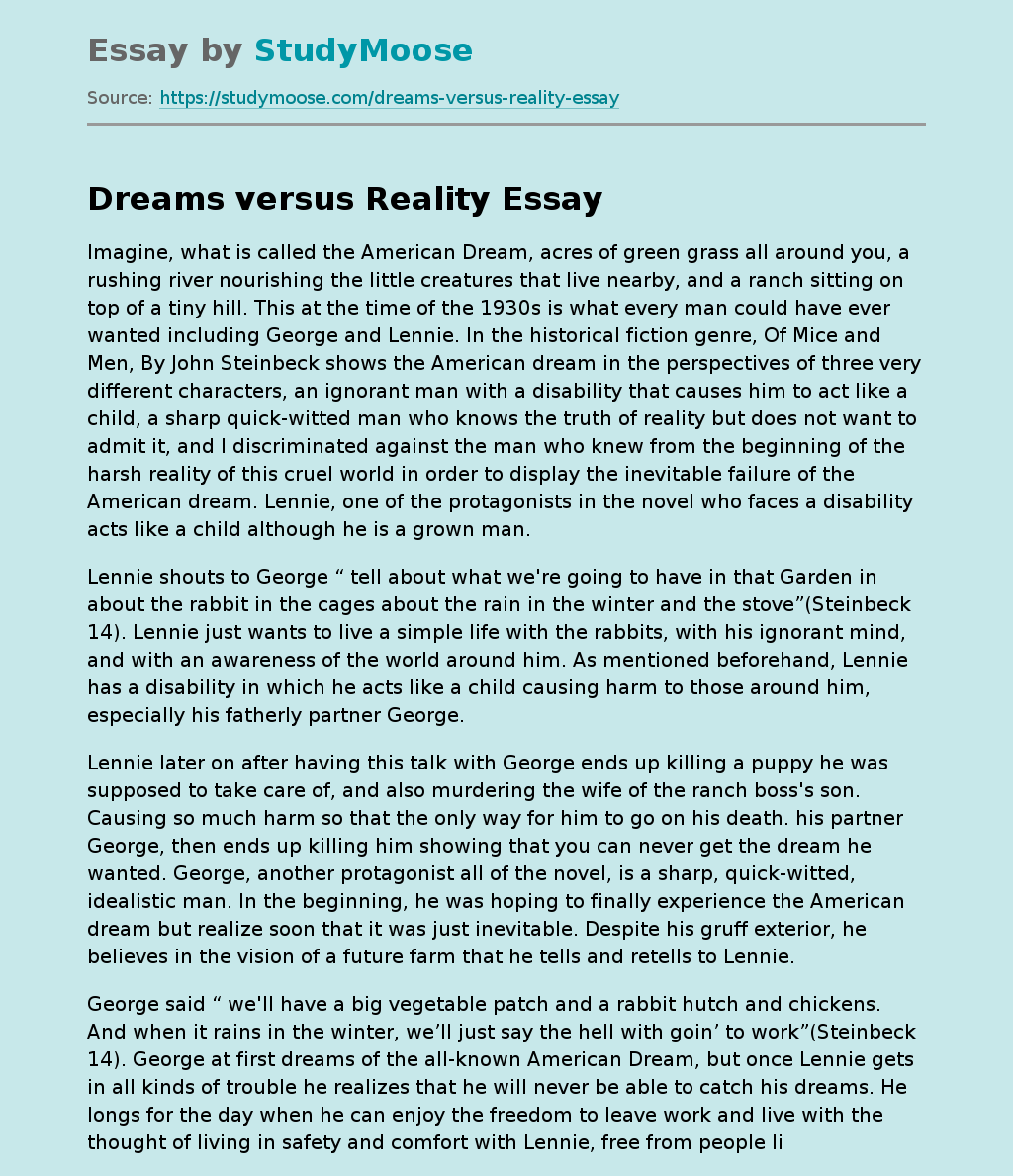