Dreams And Aspirations vs Predestination of Dr Faustus

Dr Faustus is a german scholar who shuts himself off from human normal life to achieve his aspirations, he is not only willing to to sell his soul to the devil but also to be the devil himself ” to be a spirit in form and in substance”,Dr Faustus is born to an ordinary family in germany in a small town called Rhode , he was educated at wittenberg a famous German university and obtained a degree in theology.

Faustus is a shakeasperian character he isn’t rich or a king but he is a man of hight social rank,he has a flaw in his character,the hero (dr Faustus) has a problem in his character which leads to his downfall.

Don't use plagiarized sources. Get your custom essay on
“ Dreams And Aspirations vs Predestination of Dr Faustus ”
Get custom paper
NEW! smart matching with writer

Faustus is a great scientist who has a great knowledge,he has an extreme pride and arrogance, he is not happy with the level of knowledge and science that he reaches, he wants to reach a level that fit with his think,he wants to control the earth , to gaine power and full control,to transcend human life Oh what a world of profit and delight”

Of power,of honour,of ominopotance By comparing himself with a “studious artizan,” Faustus hopes to gain all worldly pleasures and goods as the fruits of scholarly work.

He does not understand,everything must be under his command All of these things have left him unsatisfied, so now he turns to magic to black magic Faustus realizes that by practicing the dark arts, he will have extreme power in the world.

This is the turning point in his transition from scholar to magician. Faustus conjured a demon, Mephistophilis, ordering him to go to Lucifer with the offer of Faustus’s soul in return for twenty-four years of power and of pleasure with Mephistopheles as servant to him, Before the time comes to sign the contract, Faustus has doupts, but he puts them aside and signs away his soul, writing with his own blood. Faustus begins his years filled with sinful nature. He feeds greedly on the art of awakening the dead,he realizes his mistake in believing power will bring him happiness,at the end of his 24 years Faustus is filled with fears and he becomes regretful for his past action,yet this comes too late when his fellow scholars find his body torns in pieces and his soul carried to hell.

There is a failure of Christianity at the end of the drama because Faustus fails o repent. He cries out but no one is ready to listen. The ultimate lesson is that if we try to change our label from “Human being” into “God”, ultimate truth will be a punishment and that is terrible damnation,The end of the Faustus is really horrible,Faustus doubts in god’s existence is the worst thing. Eternal damnation is a result of suspicion in God. Indeed, Faustus is a tragic common man.

Dreams And Aspirations vs Predestination of Dr Faustus. (2016, Sep 13). Retrieved from https://studymoose.com/dreams-and-aspirations-vs-predestination-of-dr-faustus-essay 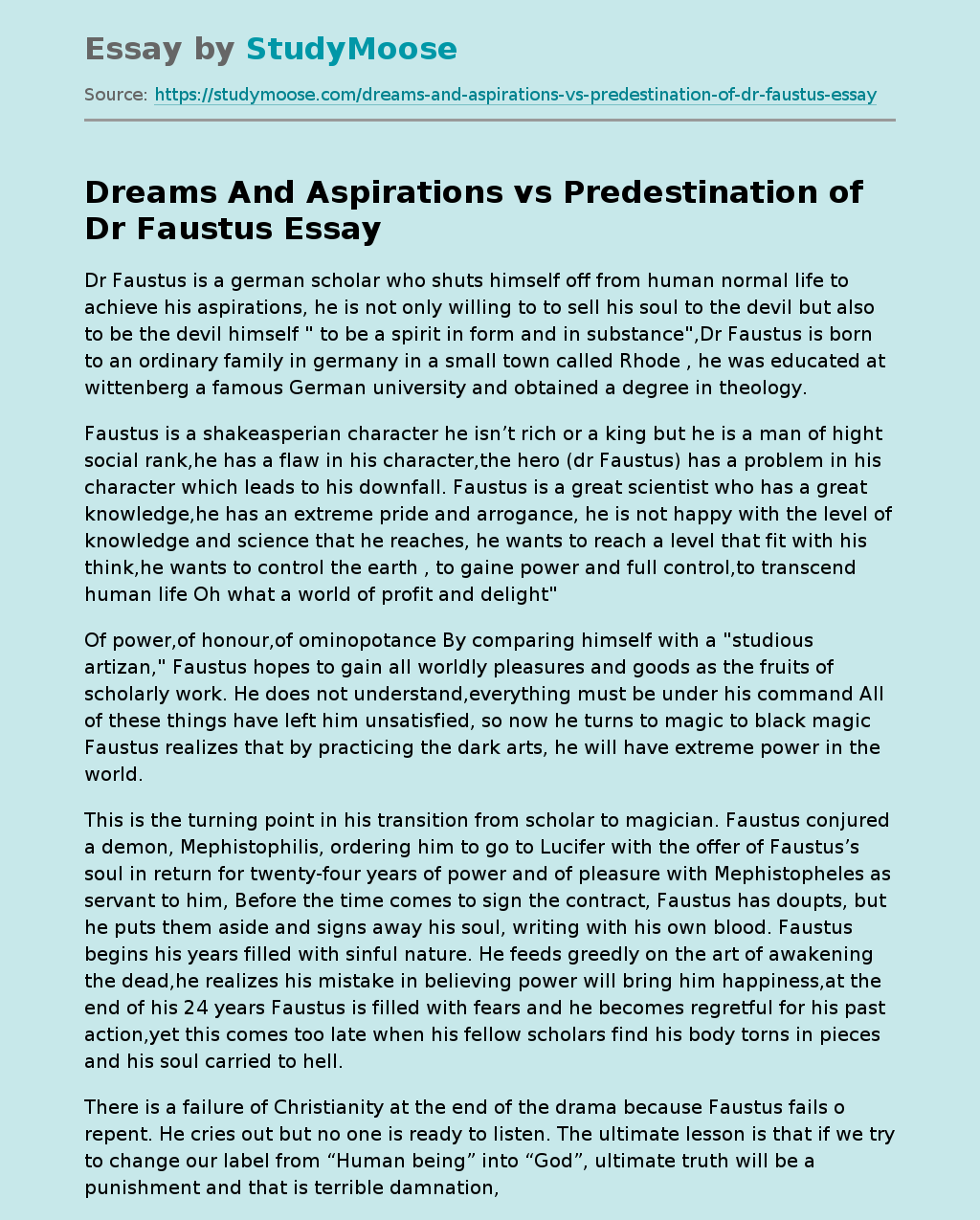