Henrik Johan Ibsen was a modern realistic dramatist. He is though of, by many authors and playwrights as the “father of modern drama”. Ibsen was considered a great national treasure by the Norwegians. Henrik Ibsen wrote many controversial plays which dealt with gender discrimination. The plays highlighted the struggles Victorian women went through to find respect and equality. Ibsen’s work gave insights into the barbarities that existed within the law and society of those times. Controversial writers like Ibsen intentionally or unintentionally forced women to rise up and reclaim their rights.

Don't use plagiarized sources. Get your custom essay on
“ Dramatist Henrik Ibsen ”
Get custom paper
NEW! smart matching with writer

His work was considered immoral and outrageous by many Europeans because it challenged their Victorian values. While other playwrights were writing moral dramas that consisted of a noble leading character fighting against evil, Ibsen challenged the same notion and came up with the opposite. He was born in Skien, a small Norwegian village, on March 20, 1828 to parents Knud Ibsen and Marichen Altenburg. When he was eight years old, he suffered drastic changes in his family circumstances.

His father was a rich merchant and belonged to one of the elitist families of Norway.

Unfortunately, the family went from prosperity to complete poverty. His mother hid her pain by becoming religious and his father became a depressive. This had a great effect on his later work. The protagonist of his many plays like his parents dealt with financial burdens and moral constraints. As a young man Ibsen was studious and non-athletic. He left home at the age of fifteen to be an apprentice pharmacist in the small town of Grimstad.

He started writing plays in his free time. He had an illegitimate child with his maid in 1846 and never accepted this child into his life.

He spent his free time preparing for his entrance into Christiania University. Bjornson became friends with Ibsen at the same university. However, he never passed the entrance test and had to continue his writing. He published his first play “Catilina” in 1850 when he was only 22. He published under the false name Brynjulf Bjarme but the play itself was never performed. The first play staged was the “The Burial Mound” in 1850. It left not much of an impact on the Norwegian audiences. Ibsen was still determined to be a sucessful playwright but had to discontinue his writing for a few years.

Soon he went to Bergen; was hired at the Norwegian Theater and helped produce 145 plays. However, he refrained from publishing his own plays. Instead he worked on getting valuable practical experience at writing, directing and producing. In 1858 he returned to Christiania and started working at the Christiania’s National Theater. He married Suzannah Thoresen in 1858 and both had had their first child Sigurd. They lived through financial problems and Ibsen became bitter about life in Norway. He made a move to Italy in 1864 to better his financial conditions.

He returned to Norway after 27 years. While living in Italy in 1865, he introduced his next play, “Brand”. The play brought Ibsen the much craved financial success and critical acclaim he needed. His next play “Peer Gynt” published in 1867 was just as sucessful. He became more and more confident about his work and incorporated his own views and judgements into the plays. He called his own work “drama of ideas”. The plays written after this time earned him power and influence and spurred controversy all across Europe. In this golden age he wrote many of his best plays.

In 1868, Ibsen travelled to Dresden, Germany. He stayed in Germany and wrote the play Emperor and Galilean in 1873 about the Roman emperor Julian the Apostate. Although he thought this was his best work however others disagreed. The work that received the most international attention and critical acclaim was “A Doll’s House”. It was written in 1879 and criticised the traditional gender roles in Victorian Society. The play was about Nora a middle class Victorian woman, ruled by her husband and unaware of her state of unfulfillment. It was set in the late 1800’s during Christmas time in Norway.

When Nora the protagonist was thrown into a dire situation she tried to protect her husband and family by committing forgery and dishonestly obtaining a loan. As a woman, she was completely oblivious to the legal consequences of her act. She believed her special status would protect her and her kids. The law on the other hand expected her to know better. At this moment she realized the hypocrisy of the system and tried to break away from her doll like shell. She suddenly wanted to live a life less frivolous. Soon, she gets a job and starts earning her own money. This new found freedom enthralled her.

However, her relationship with her husband spirals downwards and sows the seed of doubt and self reflection. Nora, throughout the play never left the room of her apartment. This one room showed various shades of hypocrisy, discrimination, arrogance and dishonesty exhibited by society. It could be Ibsen’s way of showing a microscopic vision of the world. It showed the plight and suffering of every woman in every household all around the world. The fact that Nora does not leave the room throughout the play showed how she had been trapped in this Victorian Doll House.

The original ending broke boundaries and spewed controversy in many European countries. The original ending showed Nora rebelling against her husband, her father and ultimately the patriarchal society. However, it caused too much shock and disagreement within the audiences and Ibsen was forced to change it. He later on lived to regret the change. Ibsen’s work showed the cruelty towards women in the Victorian Age. The law dictated that property; children and income should belong only to men. Divorce or Separation was shunned upon. Working women were frowned upon by society.

The status of women was equivalent to the slaves, criminals or the insane. A woman had the role of reproducing children, keeping the house clean, and feeding the children while the husband worked. To conclude, this play had a great role in convincing men and women of the Victorian age that women should get equal pay for equal work; equal rights to enjoy an independent self sufficient life; rights to child custody and divorce; equal stature in legal matters; Equal access to knowledge. Nora, the leading lady made a great sacrifice when she left her husband and stopped being treating like a mere rag doll.

She influenced many other women that they shouldn’t be treated like inanimate objects that are dispensable by the society. She taught them that they deserved respect, rights and esteem. After writing this phenomenal scathing criticism of Victorian Life, he wrote another play named Ghosts in 1881. The play was about a widow that revealed to a pastor about her life with a philandering husband. It was the first time any play had mentioned sexually transmitted diseases. In the play, the son contracted syphilis as a result of his father’s many affairs with women.

The widow’s morality could not save her from hidden evils. The play relayed to the public that sometimes fulfilling duties rather than desires can still cause trouble. In 1882, the play “An Enemy of the People” continued to be controversial. Ibsen challenged the notion that the society or community was an ethical institition. This was a chasticism of both liberals and the ring wingers. The plot was about a doctor revered by the community. However, when he tries to save the community he is called the ‘enemy of the people’. Eventually the community ostracized him.

Arthur Miller, an American playwright inspired by this play adapted it corresponding to Trumanism in America. Films were made based on this play in Bangladesh and America. The next play called The Wild Duck attacked the beliefs of reformers and their idealistic ideologies. The play was published in 1884 and proved to be Ibsen’s best and the most complex work to date. The plot was strewn around a young man named Gregers Werle who after a long exile reunites with his childhood pal Hjalmar Ekdal. Werle soon finds out the secrets behind Ekdal and his picture perfect family.

Ekdal’s father had impreganted a servant girl named Gina. He quickly married her to his son to legetimize the child. When Greger’s convinces Ekdal that Hedvig is not his child he disavows her. Hedvig to prove her love for her father kills herself in a climatic end. At the end of his career he stopped denouncing Victorian morality but moved onto introspective dramas that dealt with interpersonal confrontations. Both plays “Hedda Gabler” written in 1890 and “The Master Builder” written in 1892 had female leading characters whose energies benefitted and destructed those around them.

The personalities of Hedda Gabbler and Nora from The Doll House were quite similar. Ibsen completely revolutionized drama and inspired playwrights like Chekhov and many others. His plays were never written purely for entertainment value but to force a change within society. When he returned in 1891 to Norway, modernism had risen and replaced the dated Victorian ideals. Ibsen’s work was completed and he died on May 23, 1906 in Christiania. A hundred years after his death, Norwegian authorities named 2006 as the “Ibsen year” to commemerate his wonderful work. 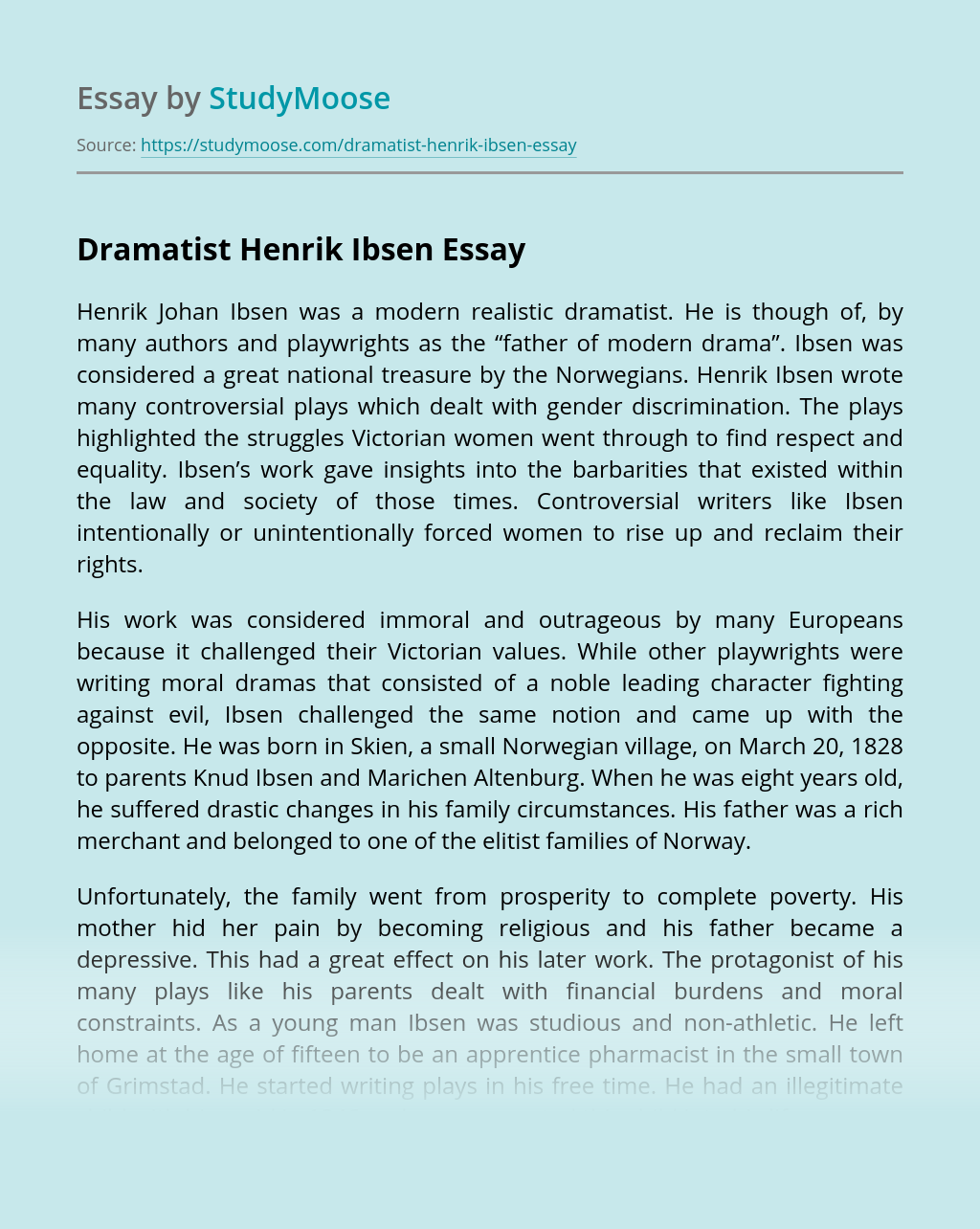