Elizabeth plays a vital character in the play, as John will obey anything she asks of him. Some would see this as a weakness, as John’s life is in the hands of his wife. – Only Elizabeth doesn’t respond to John as the “master” figure he wants and needs. This is highlighted when John is faced with the ultimatum of his life or his name. “I cannot judge you John” But John yearns for some guidance and satisfaction from Elizabeth.

Don't use plagiarized sources. Get your custom essay on
“ Argumentative Essay On Dramatic Ending ”
Get custom paper
NEW! smart matching with writer

“What would you have me do? (Simply, a pure question)” John sees Elizabeth as the closest thing to God, on earth; it is his faith to honor his wife.

The last few moments between John an Elizabeth, prove to be very emotive. John is brought to tears as he waits for his wife’s suggestion. Miller’s stage directions heighten the tension: (He stands as though in physical pain, slowly rising to his feet with a great immortal longing to find his answer.

She is on the verge of tears) – It is as though Elizabeth has forgiven and forgotten the past. The comfort John had longed for is finally coming through. “John, I counted my self so plain, so poorly made, no honest love could come to me!

Suspicion kissed you when I did” – Elizabeth is filled with regret when she realizes she may lose John. The honesty from Elizabeth is admirable to a reader, and the emotion that is directed by Miller allows the audience to feel her sincerity, feeling sympathetic for her.

– Leading up to a powerfully dramatic conclusion. On page 110 of Act 4, John decides that he wants his life; he has been informed of the growing child his wife bears. – He is fighting with himself inside; his mind and his heart are tearing him apart. “It is evil is it not?

” He is desperately questioning Elizabeth, he needs some support, he cannot decide by himself. “Would you give them such a lie?! Say it, you would not. It is evil – and I do it! ” Miller increases the tension by Proctors body language: (He moves as an animal and a fury are riding in him) the reader can almost hear his blood boil in desperation. Miller, intentionally, involves the reader, emotionally and passionately. One wants to save John for his good and principled intentions. I could not help but feel attached to John by the end of the book.

John is given an ultimatum, his life or his good name. “Why must it be written? ” John doesn’t understand why a confession to Danforth and the others isn’t enough. He has been stripped of his dignity, why can they not leave him his name? It kills Proctor to confess falsely, “his jaw locks” as he answers to Danforth’s questions – “have you seen the devil? ” As Rebecca Nurse enters, John turns his back to her. He cannot bear to look at her, knowing she has not confessed and he is doing so in front of her.

He knows he is betraying Rebecca and all of the people who have stood their ground for the truth. He is ashamed of himself. The Crucible is climaxed when Proctor signs his name, his signature is signed with fear, indignity, guilt and humiliation. He is signing away his pride. Whilst fierce conversation between Proctor and Danforth takes place about proof of Proctor’s signed confession and identification of any other “witches”, John sweats and fights his conscience against his good name. Miller allows us to feel his pain by John’s words of desperation.

– “(With a cry of his whole soul. ) It is my name! Because I sign myself to lies, I am not worth the dust on the feet of those who hang! ” Although his intentions were for his wife and family, he cannot bare for his name and the name of his 3 children to be blackened. Miller shows that truth saves Proctors soul. The crucible is taking place. – As John battles with himself and rips the confession, all his impurities and sins are being “boiled” away and all that is left is John’s tears of goodness and innocence.

John’s trial is ultimately revealing his true character. John kisses Elizabeth with great passion, a goodbye kiss, and a kiss of his true love towards her, he brings her to her knees as she weeps, intensifying the drama, and ultimate climax of John’s death. Elizabeth is pleaded with by Parris and Hale; they recognize that Proctor is telling the truth, which causes frustration to the audience, because they both have no power of Proctors fate now. The actions and expressions of Elizabeth and Hale in particular, heighten the drama and emotion of John’s death.

– “(supporting herself against collapse, with a loud cry) He have his goodness now, God forbid I take it from him” Hale drops to his knees and begins to pray frantically in desperation. Proctor sacrifices his own life for his devotion and loyalty to God. The Crucible shows how innocence can be portrayed and progress into evil. Miller successfully entertains the audience through his use of emotive language and dialogue, stage directions and providing his audience with detailed images and thoughts of characters, providing us with the vision of the reality of the story.

The story and the way it was written has similarities to that of William Golding’s Lord of the Flies. – Innocence of a group of young children and the evil that evolves from their innocence; horror, murder, lies and bitterness. Arthur Miller provides his audience with a powerful and dramatic ending, and provokes a response of passion and intensity towards the character of John Proctor. Through his elaborate and clever techniques of dialogue between characters, stage directions and his personal experience, Arthur Miller has added passion into his re-telling of the witchcraft trials in Salem. 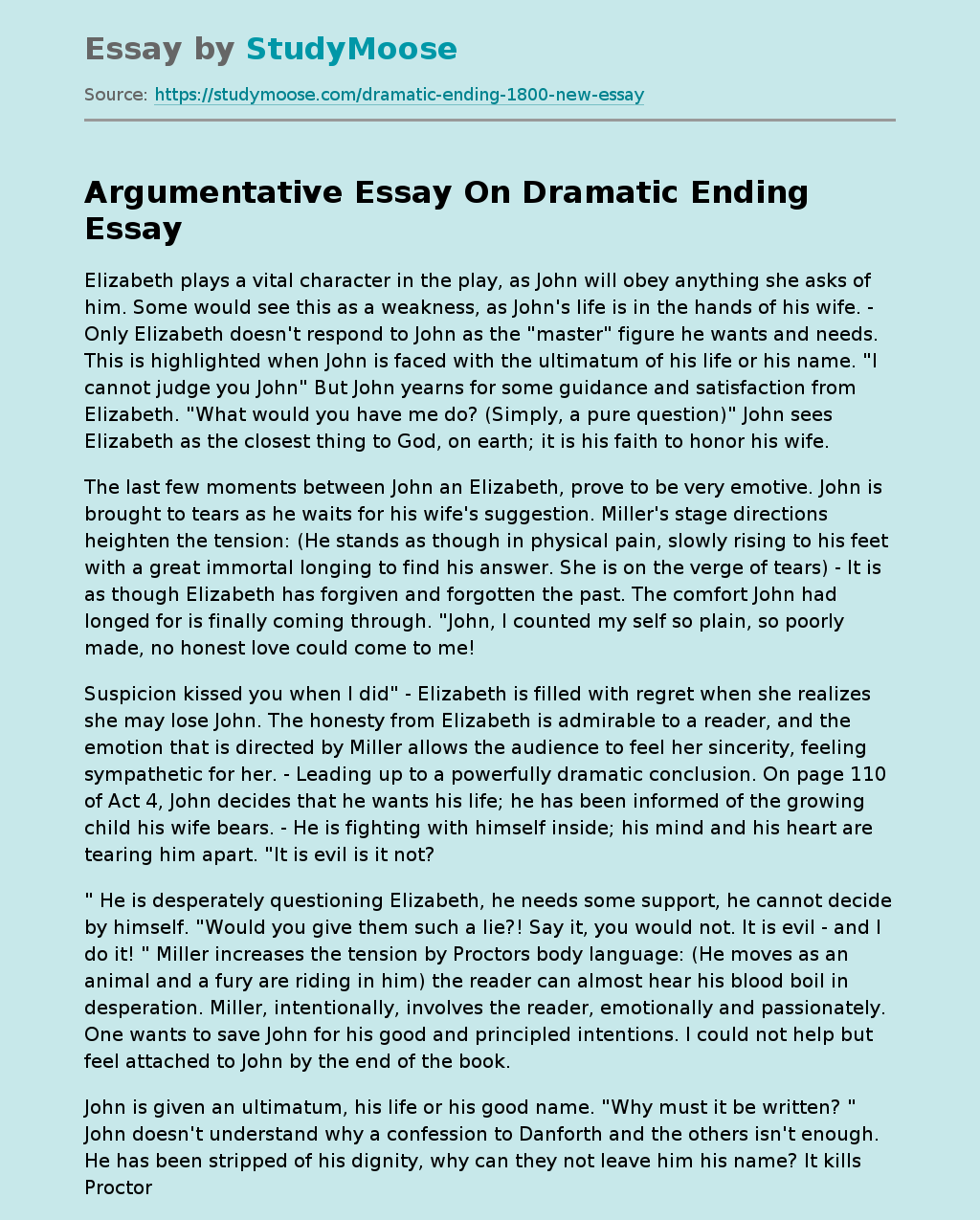