Prison break is an American television series just entering the second season. It is a drama series set around a prison. This five star thriller is based in a prison named Fox River. The masterminded character, Michael Scofield (Wentworth Miller) is the main actor in this series. He plays as a structural engineer, this comes in handy when he plans to break out his step brother Lincoln Burrows (Dominic Purcell), also acted as Drake in “Blade Trinity” out of prison. Lincoln Burrows (Purcell) is the only family he has, and is on death row, convicted of the murder of the vice president’s brother.

Don't use plagiarized sources.
Get Your Custom Essay on Drama series Prison break Just from $13,9/Page

In actual fact, the vice presidents brother is hiding. This scheme was set up by the vice president herself and her right hand man, working with the secret service agent Paul Kellerman. (Paul Adelstein) Lawyer Veronica Donovan (Robin Tunney) investigates a conspiracy that takes place indicating that Lincoln Burrows was framed for the murder. The evidence was destroyed and Veronica could not get Lincoln exonerated.

When a date was set for the execution of Lincoln, Michael has to think fast about how he is going to execute this plan. He has plans of the prison tattooed all over his body.

These blueprints are camouflaged by artwork of devils and angels and so not anyone can see it and understand it apart from him. Any phrases or important words would be tattooed backwards or inverted and only could be recognized seeing it through a mirror. He deliberately robs a bank firing a gunshot on the ceiling to acquire maximum security and gets caught intentionally and gets sent to the same prison as his brother. The action inside the prison is full of suspense as the series continues. Michael has to persuade several other prisoners who are important for this escape to happen.

Predictably other prisoners acknowledge that there is a scheme going on and they have to be part of the escape for obvious reasons. Psychopath Theodore Bagwell (Robert Knepper) known as T-Bag as his nickname, is a perfect example of why this show is so great. His character is a murder and rapist. His emetic performance is what gets the viewers gripped. Throughout the series there is another plot of what’s happening outside the walls. Veronica is working hard to end this conspiracy or to delay the execution. This is not an easy task as she is fighting against the government.

The second season is when the cons are on the run. Fernando Sucre, Benjamin Franklin, John Abruzzi, Theodore T-bag Bagwell, Charles Patoshik, David Apolskis, Michael Scofield and Lincoln Burrows are the “Fox River 8 MOST WANTED MEN IN AMERICA”. The phrase “MOST WANTED” sums up the feelings of how the cops would really like to catch them. After the breakout the cons make their way to the airstrip to board a plane that should wait there to pick them up. The plane was unknown and identified by an inspector. The pilot had to leave the cons behind after being suspicious.

This is a difficult situation for Scofield and the viewers are worried that the fugitives will be apprehended. He proves his intelligence by having a plan B if they never made it to the airstrip. They all go their different ways to uncover five millions dollars buried in Utah by an inmate that was killed in Fox River. The break out becomes a Federal matter and FBI’s have to get involved. Special conniving agent FBI Alexander Mahone (William Fitchtner) is at almost the same intelligence as Scofield and is a real obstacle for him.

This undeniable amazing series caught over ten million viewers. Brett Ratner, the director of Prison Break has turned famous after directing the best series with the highest ratings. On www. reviewit. com, 10,000 blogs show the people love the excitement and the suspense they get watching this series. Show preview only The above preview is unformatted text This student written piece of work is one of many that can be found in our GCSE Miscellaneous section. 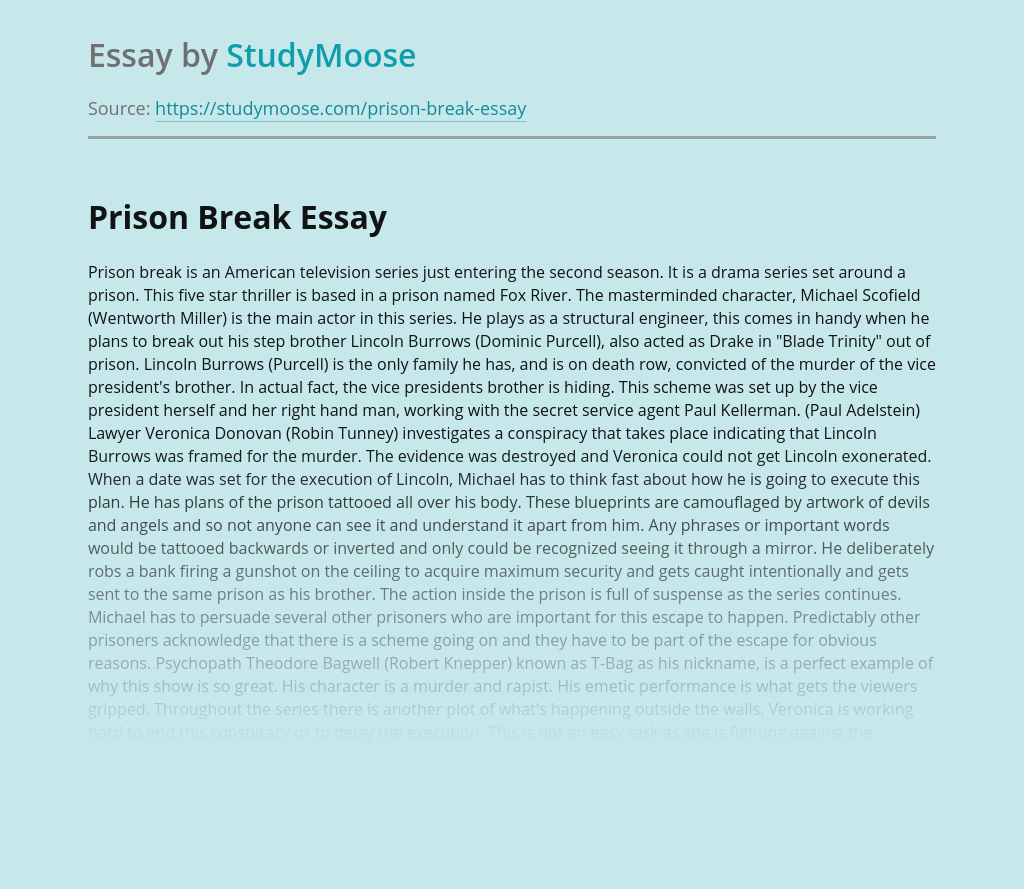 Prison break is an American television series just entering the second season. It is a drama series set around a prison. This five star thriller is based in a prison named Fox River. The masterminded character, Michael Scofield (Wentworth Miller) is the main actor in this series. He plays as a structural engineer, this comes...

Individuals constantly say that animals are our good friends; that is why we want to go to zoos to see those animals. But are the animals pleased about being secured cages and being seen by people daily? Or do they wish to live in the environments that they are expected to live? Naturally we are...

The criminal justice system is responsible for enforcing the laws created at each level of government. A major part of enforcing the laws is detaining the people who break them. The way that an offender is punished for a crime can be different depending on age or the type of crime committed. Depending on the...

Role of Correctional Officers and Their Professional Behavior

Correctional officers play a vital role in the prison system. They are the first line of defense in prisons. They are ultimately responsible for the safety, security, and supervision of inmates that are under their care. They must enforce all the rules and policies that the prison officials emplace in order to maintain good order...

“Excessive bail shall not be required, nor excessive fines imposed, nor cruel and unusual punishments inflicted.” Ever since the Eighth Amendment was ratified by the states in 1791, it has been a key part of our Constitution. The Eighth Amendment has protected our people from many things, including an overly high bail or “unnatural” punishments....