Doyle's Short Story The Hound of the Baskervilles

After reading this document Dr. Mortimer reads a newspaper article and also gives his own ideas of what he thinks happened. The post-mortem reports of the body of Sir Charles stated that he died of “Organic heart disease”. However it also stated that he had “an almost incredible facial distortion… and no signs of violence”, which makes the reader question whether the legend is true or not, as there was no violence. However when Mortimer mentions “they were the footprints of a gigantic hound, Mr.

Don't use plagiarized sources. Get your custom essay on
“ Doyle’s Short Story The Hound of the Baskervilles ”
Get custom paper
NEW! smart matching with writer

Sherlock Holmes”, this quote then makes us believe the legend is true. The introduction simply indulges the reader into the novel with excitement, suspense and mystery which interests the reader. This is done by, “Hugo… he was a most wild profane, godless man” and “The thing tore the throat out of Hugo Baskerville… as it turned its blazing eyes and dripping jaws”.

These examples create images in the reader’s mind of what a horrific creature it must have been.

There are hints as to what was the cause of Sir Charles’s death, which keep on changing. This is evident from the text because first the reader learns about the legend, then the coroners report, Mortimer’s and Sherlock Holmes’s views and the people who live upon the moor who could be suspects. By doing this Conan Doyle creates a sense of suspense and keeps the reader thinking, as to what could have been the cause of Sir Charles’s death. The opening of the novel introduces the hawk eyed detective Sherlock Homes as being an arrogant, but highly intelligent man from the start.

This is clearly seen when he responds to the legend, “to a collector of fairy tales”. This shows the reader that he is some what arrogant as he replies rudely to Dr. Mortimer, but that he is also intelligent as he thinks in the view of the “real” world, he is practical. At the start of the book Holmes asks his assistant Watson to examine a walking stick and tell him who it belongs to. “Well, then supposing that “CCH” does stand for “Charing Cross Hospital”, what further inferences may we draw? ” Dr. Watson “Do none suggest themselves? You know my methods. Apply them! ”

Here it is clear to see Holmes’s intelligence and way of thinking is totally superior to that of his companion because it seems as though Holmes thinks the task is simple and obvious, where as Watson does not. The quote also shows Holmes’s arrogance as he does not take into account that Watson does not analyse and think logically like him, he gets annoyed that things don’t come so simply to Watson. In “THOTB” the nature of the investigation is somewhat different to the typical style of investigation often found in stories of the genre.

The interviewing of characters is not the typical way of interviewing as each character is not asked to produce their own version of events. In “THOTB” different characters are asked particular questions, to provide Sherlock Holmes with the information that he needs. Examples include the interviewing of the cabman in London. The reason why he was interviewed was so that Holmes could identify the person who had been following Dr. Mortimer and Sir Henry Baskerville. “My friend here, Dr. Mortimer has informed me of what you have communicated … with Sir Charles” ” “What have I withheld? ” she asked defiantly” At this point in the novel Sherlock Holmes has already gathered enough information and evidence to come to the conclusion that Mr. Stapleton is the killer.

The reason why he interviews Mrs. Laura Lyons is to see if she provides him with any additional information, so that she can be a witness in the murder trial as she is the only witness that Holmes has and her evidence is vital in prosecuting Stapleton. Conan Doyle creates a sense of tension here as the reader is still not sure whether Mrs. Laura Lyons will help them after all the hardships she has been through. The majority of the information regarding the investigation of the death of Sir Charles is gathered behind the scenes. There are many reasons why information is gathered behind the scenes in “THOTB”. Sherlock Holmes has to be seen as being the hero and therefore the vital information is gathered behind the scenes and when it is revealed to others and therefore the reader it is much more impressive. The reader is kept in suspense by not knowing Holmes’s views until near the end of the novel.

Doyle's Short Story The Hound of the Baskervilles. (2020, Jun 01). Retrieved from http://studymoose.com/doyles-short-story-the-hound-of-the-baskervilles-essay 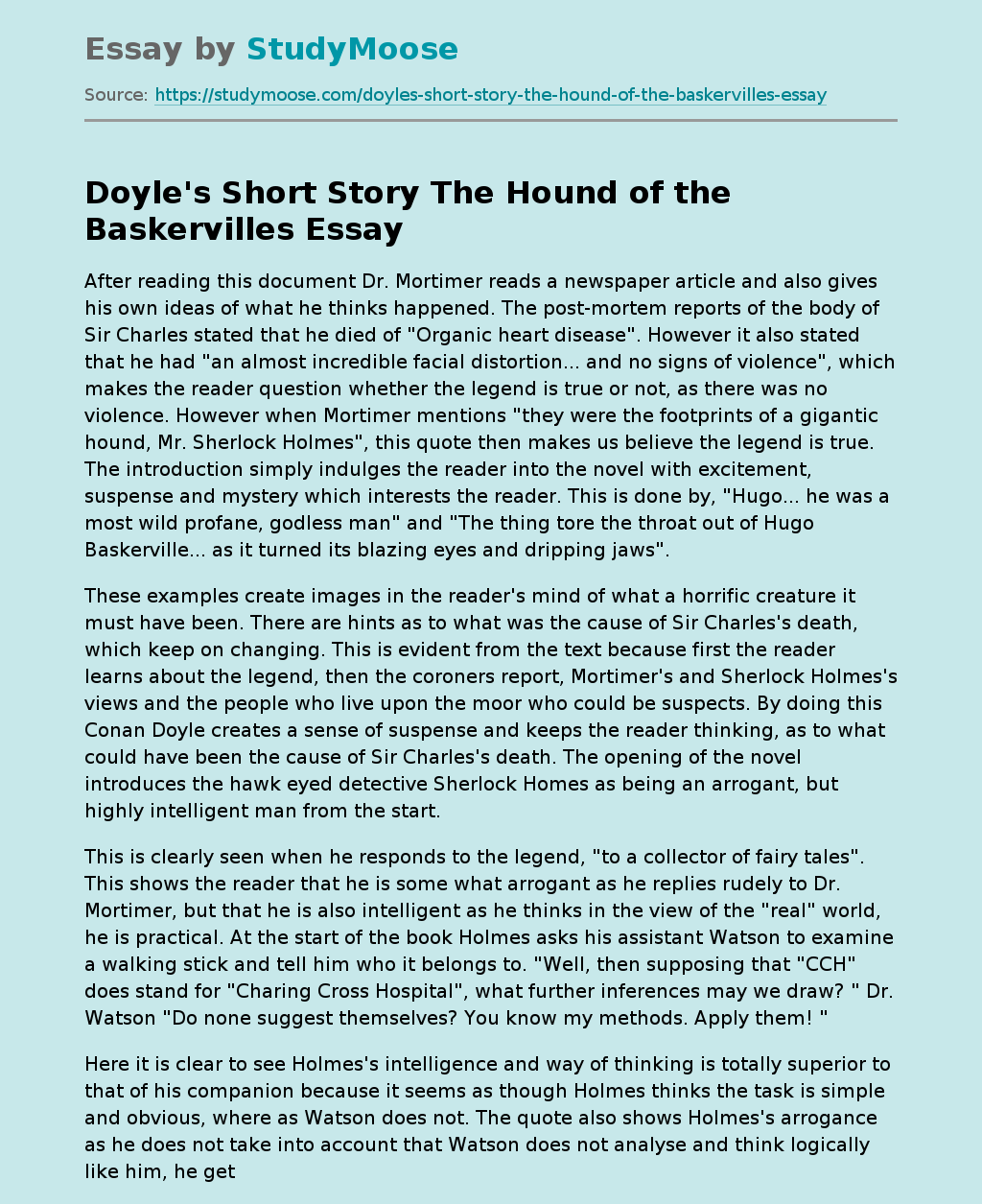