Hecht’s parody “Dover Bitch” is a mockery of Victorian values shown in “Dover Beach”, as well as those of his own period. Hecht candidly exaggerates the speech, ideas and symbols in “Dover Beach.”. The first evidence of Hecht’s mockery is of speech at the beginning when he writes ” There stood Matthew Arnold and his girl… All over, etc.

Don't use plagiarized sources. Get your custom essay on
“ Dover Beach vs Dover Bitch ?omparison of Poems ”
Get custom paper
NEW! smart matching with writer

, etc.”. He take the soft calming words of Arnold and gives them a harsh New Jersey accent. His representation of an educated woman sets the reader up to think that the woman will not sit quietly and be told what to do by her husband. But when “she said one or two unprintable things” he took away her right to speak. Thus plunging her back to Arnold’s Victorian classification that women should sit quietly and ingest her husbands opinions.

This might also symbolize the feministic movements of the early sixties. Hecht’s view might have been that women could have equality to men, but its not important enough to let them talk about it. His display of faithfulness in the women’s unfaithfulness is also a reaction to the Victorian idea that the wife should be there for her husband. It could also be a scary reality in Hecht’s mind that times were changing and women would not be at every beaconing call of their husband.

Hecht reinforces his Ideas of change by taking Arnold’s “…the cliffs of England stand, glimmering and vast” and transforms the Victorian idea of women into “…cliffs of England crumbling away behind them,”.

This supports the idea that Hecht is aware of the changes that are happening and he is envious of the way things used to be. In short, Hecht uses the Victorian values shown in Arnold’s “Dover Beach” as a comparison to the changes of values of his time. Hecht brings reality to Arnold’s romantic poem. But in reality, Hecht is displaying his views and concerns about changes that have occurred in the value system of his time. Furthermore, Hecht shows envy of the romantic time portrayed in “Dover Beach” 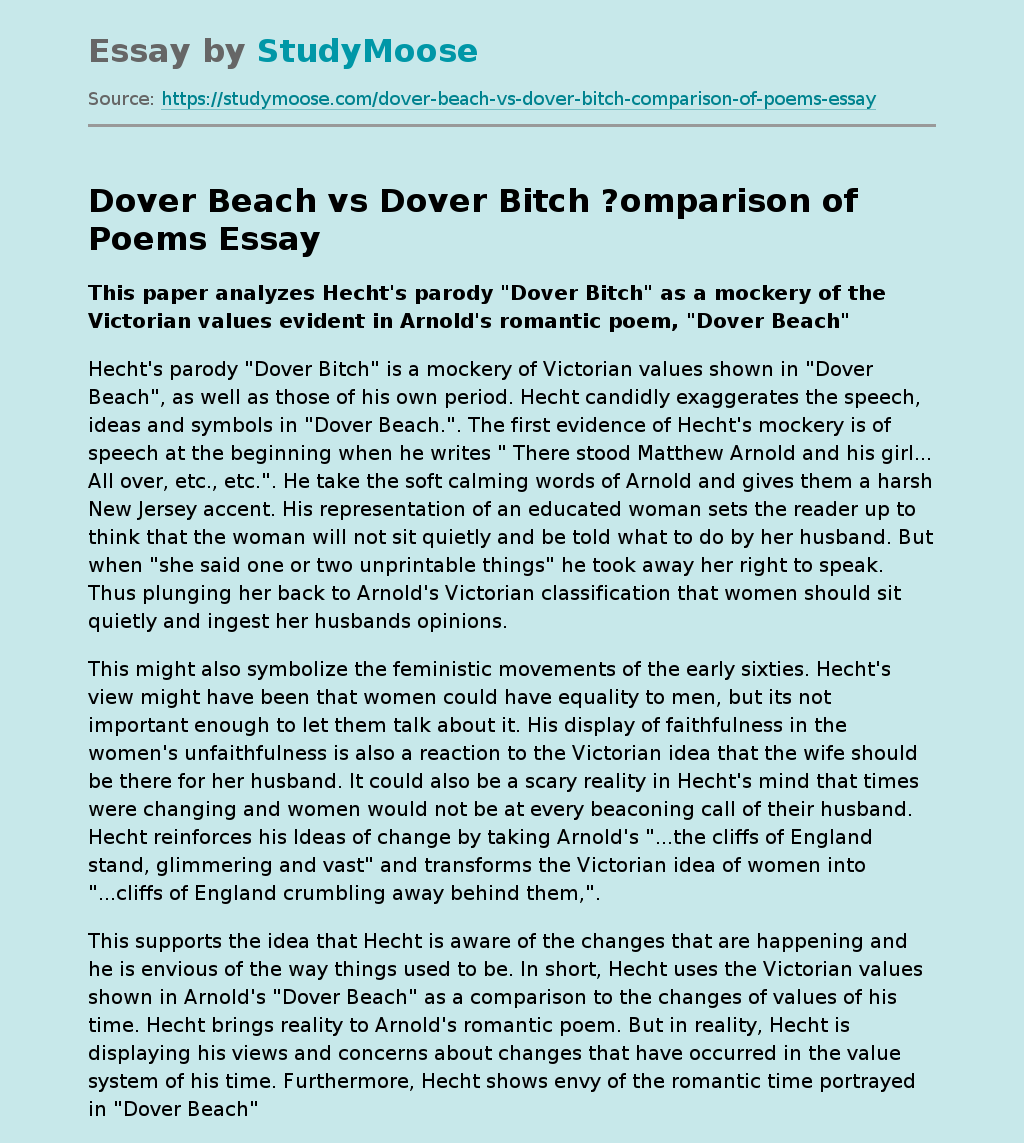