In “Double Face” of _The Joy Luck Club_, Lindo Jong recounts her journey coming into America as she sits in Waverly’s hairstylist, Mr. Rory’s, chair, preparing for Waverly’s second wedding. The symbolism surrounding Waverly and her mother’s conversation through the salon mirror subtly imply an underlying theme of a lack of communication.

Don't use plagiarized sources. Get your custom essay on
“ “Double Face” analysis from :The Joy Luck Club” by Amy Tan ”
Get custom paper
NEW! smart matching with writer

Waverly and her mother seem to be talking in different worlds as both daughter mother struggle to understand each other’s culture. For example, Lindo tells Waverly that the people in China “already know that [she] is an outsider,” which confuses Waverly, because the Americanized Waverly cannot understand Lindo’s Chinese metaphors. Afterwards, as Waverly and her mother meet for coffee, Waverly remarks to Lindo that she “is her own person”, only to have Lindo question herself about “when [she has] given [Waverly] up;” due to Lindo’s lack of understanding of “Americanisms”, Waverly’s comment confuses Lindo.

Later, Waverly and Lindo speak through the “mirror” at the salon to each other’s “reflections”. Since speaking through mirrors is an “American custom,” Lindo, a traditional Chinese woman who is accustomed to the custom of speaking directly to her elders, finds this strange.

While at Mr. Rory’s salon, Waverly shows a complete lack of respect for her mother.

For example, Waverly openly criticizes her mother’s head, as if Lindo “was not there,” clearly disregarding her mother’s existence.

Then, Waverly speaks to Lindo in a loud voice, as if Lindo has “lost her hearing,” condescendingly to her own mother. Furthermore, when Mr. Rory tells Waverly how much she and Lindo look alike, Waverly’s “eyes and smile… narrow… [like] a cat… before it bites,” as if Waverly is disgusted for resembling her mother. Waverly’s incomplete understanding of Lindo as a “backwards old woman” who cannot understand American customs, makes her ashamed.

Due to a lack of understanding, Lindo and Waverly must change themselves using double faces for each other to understand their thoughts. For example, after Waverly loudly asks Lindo what kind of hairstyle she wanted, Lindo smiled using her “American face”, a face she says her daughter cannot understand, for it masks her true feelings. However, Lindo later smiles with her “Chinese face” when Mr. Rory remarks that it was “uncanny how much [Waverly and Lindo] looked alike.” After, Lindo is surprised when Waverly tells Lindo that “[people] know that [they] are two-faced.” Misunderstanding her daughter, Lindo thinks she must “sacrifice the other [face]” if she chooses to show one, whereas Waverly just simply mean to say that they can use their double face to their advantage.

In summary, this section hints at the difficulties caused by a lack of understanding between Lindo and Waverly, as well as the difference in cultures, as both struggle to relate to each other through mixed messages and foreign customs, only to add to their confusion, propelling the two endlessly in the same cycle. Due to these differences, Lindo and Waverly fail to understand each other’s true intentions and personalities, as these misinterpretations reoccur in the rest of the stories. Ultimately, such misunderstandings cause an emotional distance that is found between Lindo and Waverly, as well as with the other members of the _Joy Luck Club_.

In summary, this section hints at the difficulties caused by a lack of understanding between Lindo and Waverly, as well as the difference in cultures, as both struggle to relate to each other through mixed messages and foreign customs, only to add to their confusion, propelling the two endlessly in the same cycle.

The old conclusion merely restated the thesis, without explaining its significance to the subject, or how it affects the whole story. 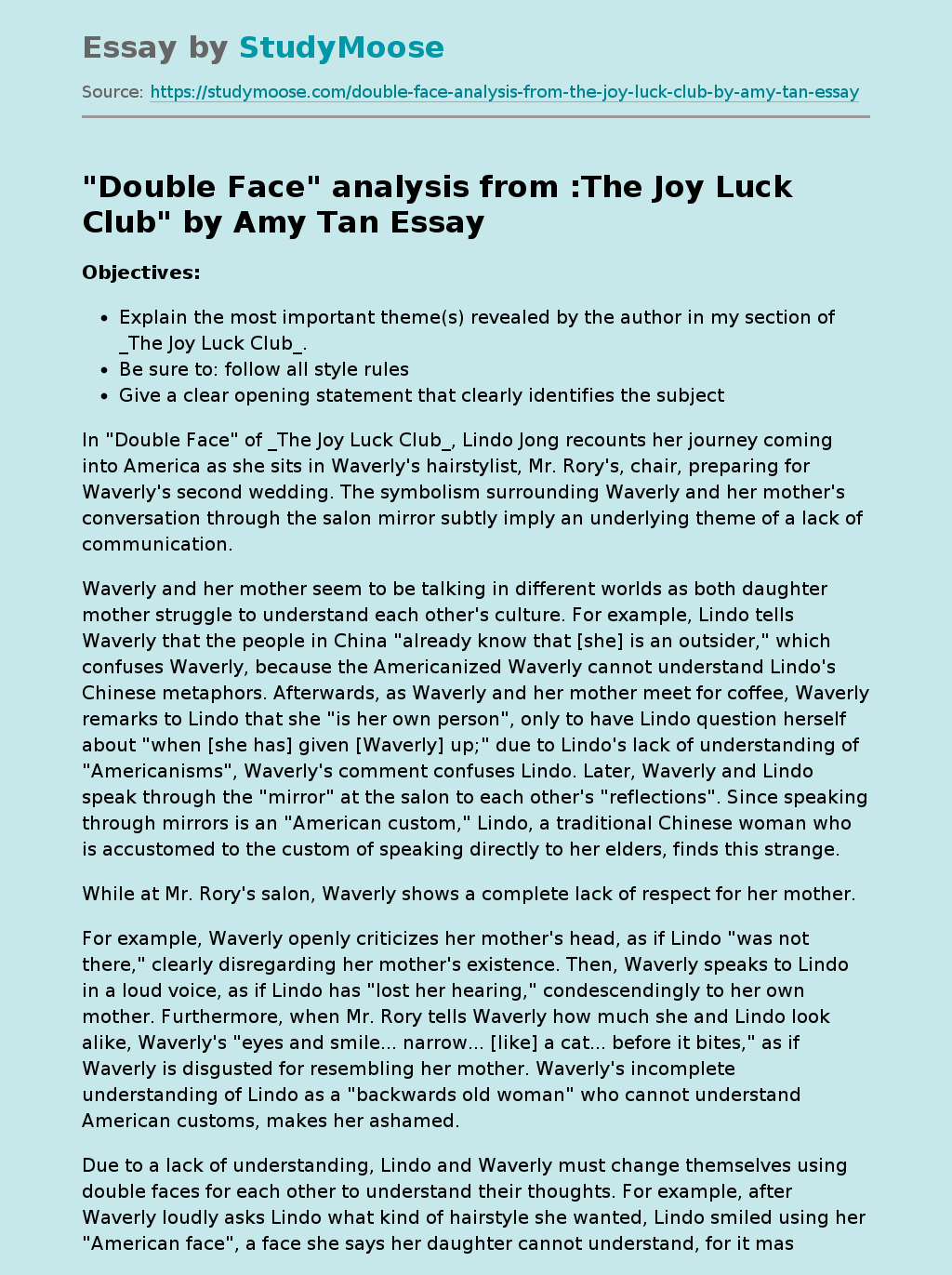