The Souls of Black Folk written by Du Bois around the years following the Civil War, describes the African American struggle to gain independence and freedom within the United States. While describing all of the struggles endured by these people during this time, Du Bois discusses many racial stigmas such as the problem of the color line, the veil of race, along with emphasizing on the idea of double consciousness, which results from all of the injustices that were placed onto African Americans.

Don't use plagiarized sources. Get your custom essay on
“ Double Consciousness in W.E.B Du Bois “The Souls of Black Folk” ”
Get custom paper
NEW! smart matching with writer

Double Consciousness is the idea that a person is constantly looking at their selves through the eyes of other people. African Americans dealt with the struggle of believing and focusing on the way others viewed them as inhumane and below them. Du Bois described many instances in which Africans had to deal with focusing on fighting for their independence while being under ownership by their white male landowners. This was a very difficult struggle for them. Double consciousness is manifest in American society by separating the whites and the blacks, creating a “color line” in between them, and ultimately resulting in whites being seen as superior and African Americans being suppressed and trapped in a world in which they are unable to escape from.

Double consciousness was manifested into American society and still is by having a color line exist in which the whites and the blacks were divided in the eyes of almost everyone. Du Bois states, “The problem of the twelfth century is the problem of the color line” (The Souls of Black Folk, Pg.

9), he repeats this statements multiple times throughout the book. This expression is a term coined that referred to the racism expressed towards African Americans during the years following the Civil War. Although this line was invisible, it was very much present in the lives of many. Whites led charge and were seen as the much inferior race. They had advantages that were above those of the blacks. Blacks were unable to work, or attend schools that quite matched up to the ones of the whites. This was unable to provide them with the same outcomes and opportunities. This divide between races let the minds of people to believe that the other race was a different kind then them and were deserved to be treated as so. Sharecropping came about in the South of the United States during the Reconstruction Era. Sharecropping was the process in which landowners would allow tenants to use their land in return for a share of the crops on their land. These tenants were usually blacks whom were previously slaves who had no other way to feed their families or nowhere else to stay. Although sharecroppers were technically free people, sharecropping was just an extension of slavery which was continuing the belittle African Americans. White landowners would set things up so that tenants would not make enough to support themselves or their families, leading tenants to borrow money or goods from their landowners. This pushed African Americans further into debt. This debt prevented blacks from moving away and not allowing them to start their own independent lives. Du Bois states in his novel, “The Nation has not yet found peace from its sins; the freedman has not yet found in freedom his promised land. Whatever of good may have come in these years of change, the shadow of a deep disappointment rests upon the Negro people” (The Souls of Black Folk Pg. 4). This quote describes that although slavery was technically abolished, that still did not do much for the rights of the blacks. Sadly, this color line that was manifest in American society back then, is still seen in today’s society. Racial profiling is still very prevalent in the criminal justice system, blacks and Hispanics are constantly singled out in investigations and are disproportionately involved in crime. Although these issues have gotten much better than they once were, discrimination is still prevalent today, and people in today’s society tend to self-segregate themselves by race in the form of clubs, fraternity’s, and even in every-day life.

Throughout Du Bois’ novel The Souls of Black Folk, Du Bois constantly references the condition of black and white relationships. Most relationships between whites and blacks during the time of reconstruction following the Civil War was one of the landowner and the worker. Mutual respect was not present in these relationships, even after slavery was abolished. These unhealthy relationships and stigmas towards blacks created the idea of double consciousness. With the relationship between these two races separating them into two different categories, blacks were forced to recognize the struggle between believing what others thought of them and trying to ignore the negative ideologies about them. Du Bois writes in The Souls of Black Folk, “For this is certain, no secure civilization can be built in the South with the Negro as an ignorant, turbulent proletariat” (Pg. 64). This quote describes that as long as the “Negro” is described as lower than others, there will never be able to be a secure and prosperous society in the south. There would always be one race dominating over the other in this state and that is just not the way that a society is meant to be. Even after the ratification of the thirteenth, fourteenth, and fifteenth amendments, tensions between the two races were not resolved or lessened. Black Codes were put in place by specific states which would limit the rights that newly free blacks would receive. These laws were specifically intended to place blacks right back into forced labor under a different name than slavery. Between the Black Codes and Sharecropping, African Americans were unable to compete for the same resources and independence that the whites were given, causing an internal struggle within the blacks on their identity.

The most important impact that Double Consciousness had was on black’s identity itself. Du Bois writes in The Souls of Black Folk, “After the Egyptian and Indian, the Greek and Roman, the Teuton and Mongolian, the Negro is a sort of seventh son, born with a veil, and gifted with second-sight in this American world—a world which yields him no true self-consciousness, but only lets him see himself through the revelation of the other world. It is a peculiar sensation, this double-consciousness, this sense of always looking at one’s self through the eyes of others, of measuring one’s soul by the tape of a world that looks on in amused contempt and pity” (Pg. 2). Du Bois mentions the “veil of race” throughout his book multiple times. The veil of race and double consciousness are terms that Du Bois uses intertwiningly throughout his novel. Du Bois refers to the veil of race as the literal color difference between blacks and whites, along with the connotations that are associated with both races. Whites saw blacks as not true Americans and blacks struggled to see themselves as more than whites perceived them as. This is how double consciousness in black society came about. Du Bois describes in The Soul of Black Folk the moment in which he realized that he was under the veil of race; “Then it dawned upon me with a certain suddenness that I was different from the others; or like [them perhaps] in heart and life and longing, but shut out from their world by a vast veil. I had thereafter no desire to tear down that veil, to creep through; I held all beyond it in common contempt, and lived above it in a region of blue sky and great wandering shadows” (Pg.2). In this instance, Du Bois came to the realization that him being black was a problem for others around him, a moment that every African American had experienced during this time. Through the veil of race, whites were unable to look at blacks as anything other than below them, not comparable to their race, and unable to ever reach the level of excellence that the whites had achieved. Double consciousness comes from the idea of “two-ness” in which Du Bois describes is the idea of being aware of being an African American and also an American and being torn between these two different identity’s.

Double Consciousness was introduced in in W.E.B Du Bois’ The Souls of Black Folk. Throughout his infamous novel, Du Bois goes on to describe the African American lifestyle after the Civil War, one in which was full of social injustices and inequalities. Double Consciousness was an idea introduced by Du Bois in which resulted from all of these injustices and inequalities that were largely present. In the midst of all of these struggles, blacks found themselves in an internal struggle of seeing themselves through the lenses of others. This Double consciousness became manifest in American society by separating the whites and the blacks, along with creating a “color line” in between them, and ultimately resulting in whites being seen as superior and African Americans being suppressed and trapped in a world in which they are unable to escape from. Double Consciousness gave a name to what so many African Americans were feeling during this time period and for years following. 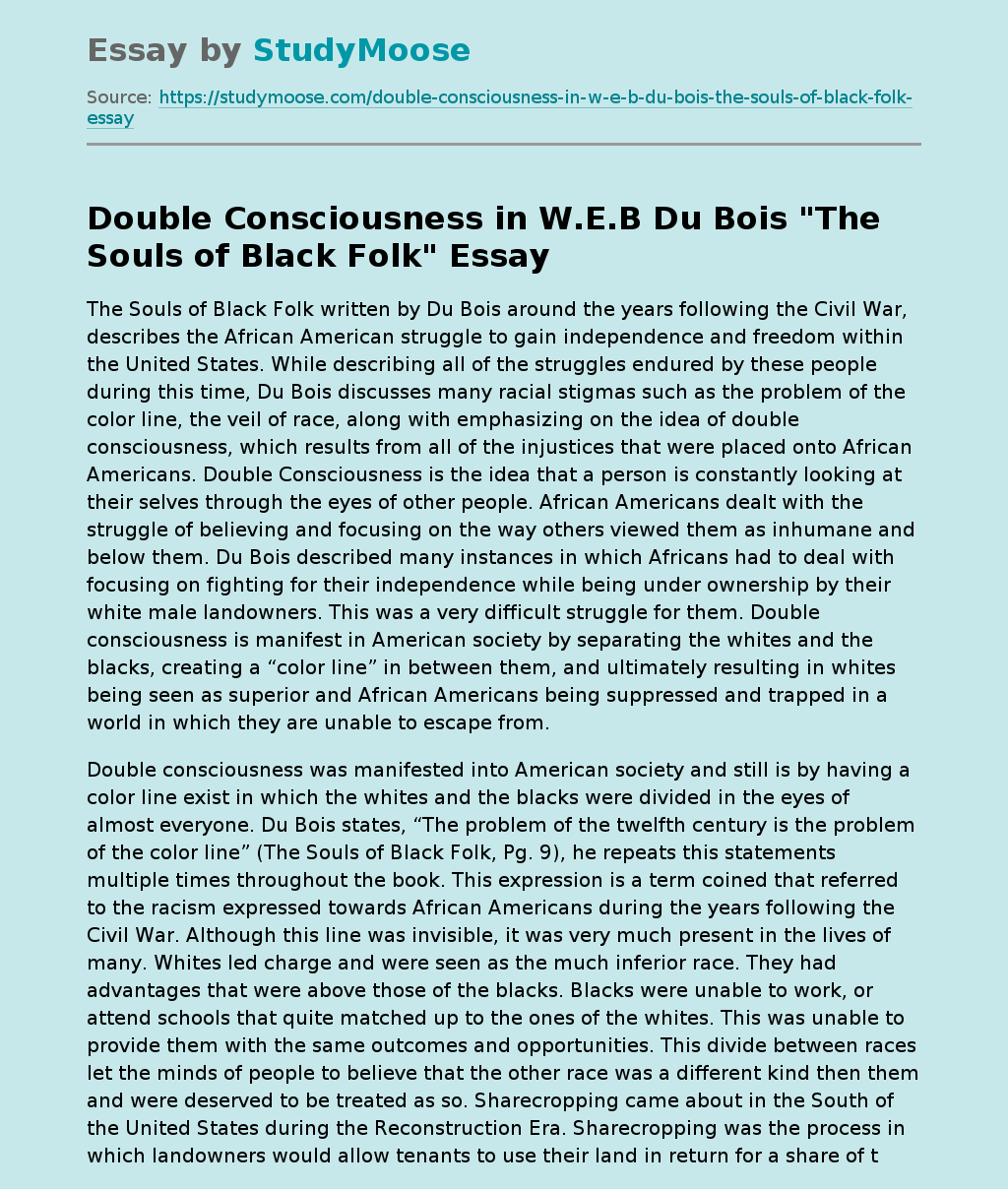