What does it mean to be a distracted driver? Every day, each and every second, there are car accidents that caused by texting while driving. Over the years, driving while texting has been rated as the most dangerous of all distractions. How does texting while driving be so distracted? According to the Official US Government Website for Distracted Driving, the three main types of distraction are visual, manual, and cognitive. Visual distraction means take eyes off the road.

Don't use plagiarized sources.
Get Your Custom Essay on Don’t Text and Drive Just from $13,9/Page

Manual distraction means take hands off the wheel, and cognitive means take mind off the road. Texting while driving is the most dangerous because it involves all three main types of distraction. It takes away all the three important things that are needed for safe driving: eyes on the road, hands on the wheel, and mind on driving. Therefore, texting while driving should be ban.

Examples could range from fixing his or her hair, holding a cup of coffee, changing the radio stations, to the most obvious example, texting. When drivers take their hands off the wheel, they don’t have full control of the wheel. As a result, the driver’s attention is focused on the manual task rather than focusing on the road.

The third distraction involves cognition. Cognitive distraction occurs when drivers taking their mind off the road. When talking about cognitive distraction, most people will consider the multitasking of the brain. How many functions human brains can perform at the same time? People often think that they can do two things at the same time. For example, some people say that they can talk on the hands-free phone while driving. According to the Nation Safety Council’s White Paper March 2010, human brains do not perform two tasks at the same time, but the brain is switching between tasks. In reality, human brain only performs one task at a time. Therefore, talking on hands-free phone devises do not help reduce cognitive distraction. Also, it will increase the risk of injury and property damage.

When someone is driving, he or she is taking a huge responsibility. It’s not only just for himself or herself, but also for the people who share the road with them. Every day, people die because they text their friends or answer their phones while driving. If the driver does not pay attention, with just one little mistake, he or she might miss something. He or she can prevent the distraction by putting his or her cell phone on mute. Everyone must think twice before they begin to text and drive. Don’t text while driving! 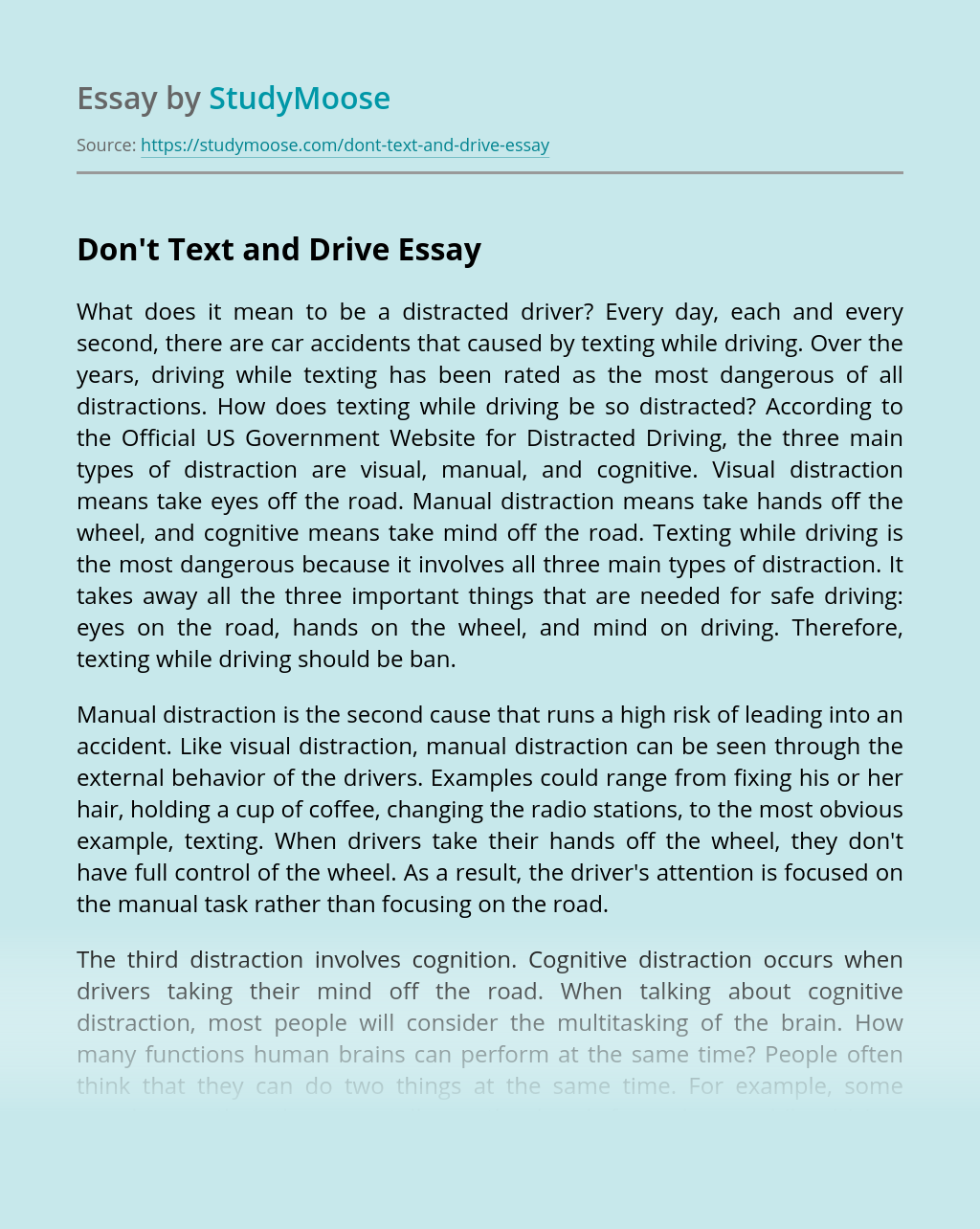 When a new driver gets behind the wheel, how do you know they are old enough? Do you consider their maturity level and ability to comprehend an emergency situation or do you just assume at the age of 16 they are ready to start driving? This has been a concern for many years now and... VIEW ESSAY

Earning a driver’s license is a most important event for most young Americans. Sixteen is the minimum age at which Indiana teenagers can obtain a driver’s license. How can anyone say that rising the driving age would be favorable to the general community? While it is true that the amount of car accidents involving teenagers... VIEW ESSAY

View sample
Get Essay
The Importance of Defensive Driving

1,051 people were killed on the road in 2011, according to the final statistics1 of the Royal Oman Police. Oman, unfortunately, has continuously recorded a huge leap2 in road accidents and accident- related deaths. Despite the fact that drivers should have a high degree of attention, caution and awareness, we cannot solely blame3 them for... VIEW ESSAY

Road accidents have been and will continue to be one of the greatest health hazards. Statistically, it has been shown that the number of death and injuries due to road accidents. It has been increasing steadily. Why these road accidents, occurring in our daily routines? Is they forgot road safety rules? There are many causes... VIEW ESSAY