Using more intelligence such as federal agents and troopers, is a way that all of this effort can stop certain crimes, immigration, closed down of the border such as other problems. Enforcing several agencies to add more federal agents to the U.S border patrols will more than likely help in immigration problems. President Donald Trump as well Senators and other important people have been struggling and having problems with all this migrant caravan crisis in our border. President Donald Trump demanded a 5 billion bill in order to build the wall.

Don't use plagiarized sources. Get your custom essay on
“ Donald Trump’s Solution to the Immigration Problems ”
Get custom paper
NEW! smart matching with writer

Therefore, the Senate passed a short bill in order to surprise the Republicans colleagues. Trump wasn’t happy so he replied, that he wasn’t going to sign the bill. More than 75% was approved to sign the Border Wall Bill. It turned out that the other 25% Democrats refused to approve it. So, because Democrats didn’t want to approve the border wall bill that, led to a problem with President Trump.

For instance, Trump had to shut down the government for 21 days. All federal agents were without pay, they had to struggle and pay their own essentials. Finally, Senate and House came with a bill deal to reopen the government after Trump have his speech and approved a temporary solution. About 800,000 federal agents got paid and kept on track with their payments. While reopening the federal government the border wall money was not discussed nor it was part of the deal. Democrats and Republicans will work together in order to come witha conclusion about Trump funding 5 billion dollars to build the border wall.

The author gives out some points how Republicans and Democrats are having a problems of not coming up with a solution for the border wall. They are not satisfied with the solution came up with so they had to re open the government.

Republicans such as Democrats overturned President Trump’s declaration of national emergency in South Texas. Supposedly, Trump had exceeded his powers trying to build a border wall over Congress objections. Therefore, Congress voted for first time which would block a presidential emergency declaration. Which one of the core promises animated Trump’s political rise. Also, Trump has a immigration policy called zero tolerance, which means the separation of children and adults who cross the border illegally. While on Friday afternoon, U.S Attorney General Jeff Sessions ordered to federal prosecutors on southwest border to adopt the policy zero tolerance. During that same week President Donald Trump, attacked Democrats for supporting what he said catch and release policies. Were illegals individuals, apprehended by Border Patrol and released while they wait for their court date. Therefore, it is unclear what the mandate will do with current immigration court cases. According, to Transactional Records Access Clearinghouse at Syracuse University, more than 648,000 cases backup due to not enough Immigration Attorneys as well with so many illegals overwhelmed coming in seeking for asylum. To add more, due to Trump’s administration more than 2,400 children were separated from their families and placed in a shelter and safe place.

Also, Democrats are trying to convince President Donald Trump and other important political party lines that there’s no crisis in our southern border. This consist, because Democrats say building the Border Wall, is a big waste of money and it’s not helpful for our community. While Republicans try to convince President Trump and other political parties that there’s crisis in our southern border. For example, Border Patrol as well with Law Enforcement agencies have been encountering numerous of illegals and drugs crossing into the U.S. Within the last 24 hours Border Patrols arrested more than 1,000 illegals. Within a month in RGV Sector law enforcement officials arrested more than 14,000 undocumented persons therefore, 2,900 unaccompanied children. Yet, Democrats and other party lines say there is no crisis in our border.

We need the border wall this would reduce the percentage of illegals crossing into the U.S. Also there has been several delays in our southern border. For example, when U.S Citizens and residents cross into Mexico when they are returning back they experiencing up to 4 to 5 hours of wait line. There’s people from the caravan in several port of entries throughout South Texas seeking for asylum. How would it affect us as citizens if the border shut down. For instance, in economic about billions of dollars, other legal products brought from Mexico and as well people who work over in the U.S. Citizens are not satisfied on what’s going on our border. Democrats are not pleased with President Donald Trump building the wall while, Republicans are satisfied with Trump’s decision. So many problems are occuring in our community such as around the world if political parties and and public officials would come up with some solutions, it wouldn’t be a mess how it is right now.

Political opinions and parties lines are primarily what the government consist of. In order to reduce the amount of immigrants and drugs coming into the U.S. Is by adding more law enforcement , tactical equipment, enforcing more laws and over all for Congress and Trump to come up with a solution. The media and other people are discussing how we need the border wall and how our community is getting over populated by people coming into the U.S illegally. The White House needs to come up with a solution in order to stop all the problems. 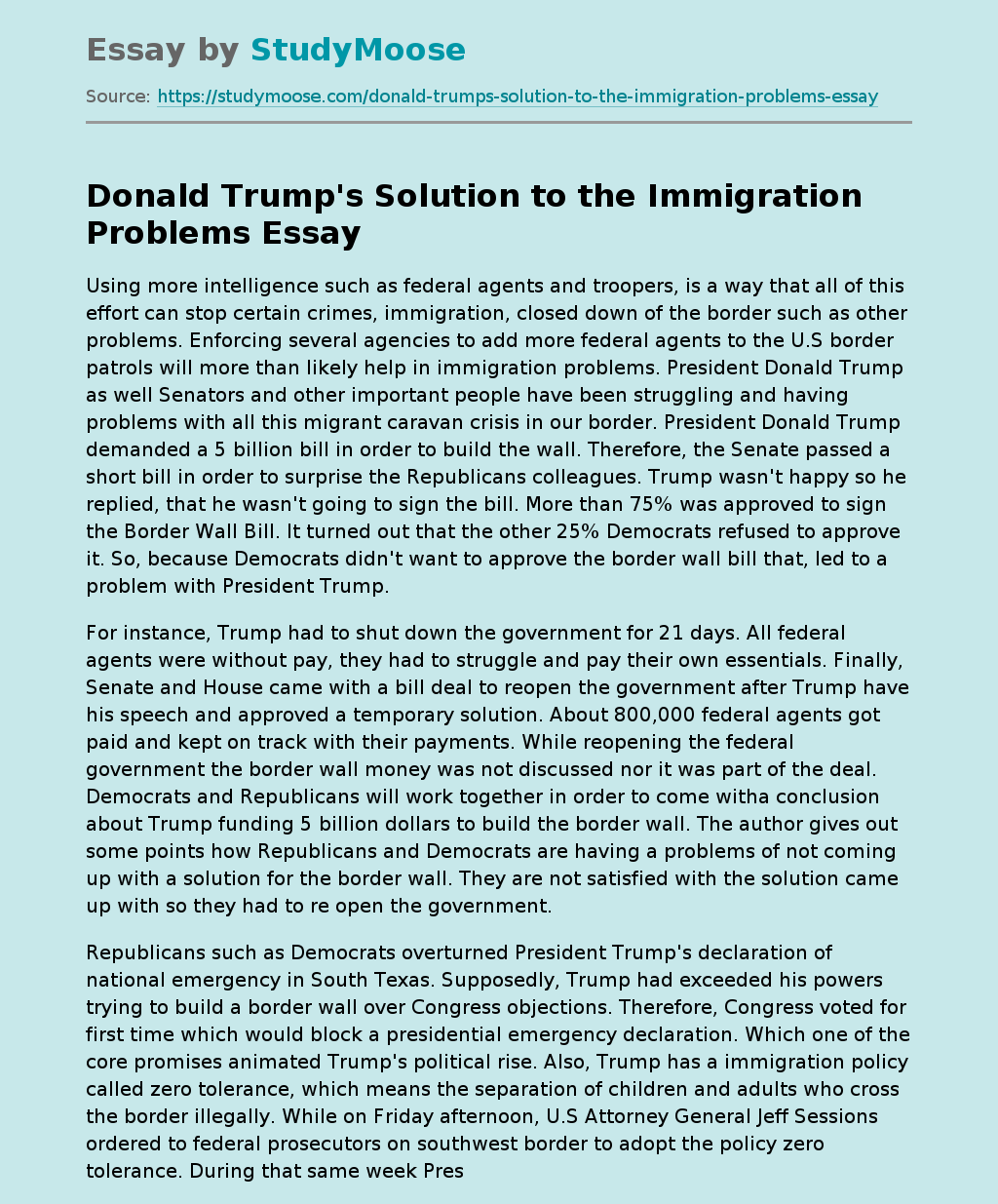