Brutality, crimson waters, what a gruesome spectacle it is to see the horrifying sight of dolphins being slaughtered by Taiji fishermen for a profit. In a total of six months the murderers will catch and kill about twenty three hundred of Japan’s annual dolphin population of twenty thousand dolphins. The capture of the dolphins is sinister. The fishermen bang pipes together under the water to throw off a dolphin’s hypersensitive sonar in order to drive the dolphins into a large hidden cove that is then closed off by nets ensuring no escape.

Don't use plagiarized sources. Get your custom essay on
“ Dolphin Killings in Taiji, Japan ”
Get custom paper
NEW! smart matching with writer

Bringing the dolphins to the cove looks like an orchestrated ballet when you see the boats performing their moves out on the horizon. What a person cannot see or even appreciate when you’re standing at the beach in the cove is the terror that the dolphin hunters are forcing upon the dolphins. There are three primary species of dolphins hunted by the Taiji dolphin hunters: bottlenose dolphins, Risso’s dolphins, and Pacific white side dolphins.

Even though all three of these species panic when they are herded in from the ocean, the white sided dolphins are especially panicked.

They rarely come close to shore; they prefer to stay out in the deep ocean. The entire process from the locating of the pod to the kill can take twenty four hours. During this time the dolphins panic until they are exhausted. The dolphins will often throw themselves against rocks in an urgent attempt to flee from the terrifying noise of the banger boats.

The Taiji fishermen kill the dolphins using a technique called pithing to avoid getting too much blood into the cove. Pithing involves severing the spinal cord and plugging the wound by hammering a reed into the hole with a mallet.

This is not a humane way to die, it is only a way to avoid getting the water bloody, some dolphins have been known to thrash in the water for twenty minutes after being pithed. After this process they are loaded onto boats and the dead dolphin bodies covered with blue tarps to avoid people getting any camera footage of this horrible scene. They are then taken to be cut up in a quayside warehouse that is blocked off by heavy shutters. When the butchers arrive to cut up the dolphins they wrap their tools in plastic bags and newspapers, once again so there is not a chance for camera footage.

They do not want the world to see this stuff. The Taiji fishermen claim that dolphin butchering is part of their heritage. Covering up their deeds with blue tarps doesn’t sound like a tradition to be proud of. This horrifying ordeal starts on September first of every year and continues for approximately six months. According to Taiji officials, half of the Bottlenose dolphin catch will be sold to aquariums in an attempt to keep down the loudness of international opinion.

The men and women from aiding organizations are public enemy number one to the fishermen and the killing organizations countries such as Australia have become angry about Taiji and their killings of whales and dolphins. Critics refer to the killings as senseless slaughter of intelligent creatures. There are activists which visit Japan every September in an attempt to video tape the carnage and make people aware all over the world. Cruelty to animals is probably the main reason for the argument against these hunts but there is another important reason for concern and that is toxins in the dolphin meat.

More and more evidence is showing that dolphins are becoming contaminated by marine toxins and that eating them may be a threat to a person’s health. Health officials in Denmark and the Faroe Islands are already recommending that the meat of pilot whales taken in the notorious “grinds” not be eaten due to a high level of contaminants in the meat. Louis Psihoyos, the documentary filmmaker of, “The Cove,” said the film is not meant to be an attack on the Japanese, but a way of letting them know about the threat that may be present by the mercury in the meat. Just look at the film,” he said. “This isn’t an indictment against the Japanese people. We want to give them the information that they don’t have readily available. ” There is also another side to the story, one fisherman issued this statement, “I think we are the victims of a form of racism” he continued to say that people slaughter cattle and other animals in some of the most inhumane ways, but no one says a word. “Why is it that only Japan gets this kind of treatment? ” This statement is definitely one to consider when we do start to criticize other cultures for their lifelong habits.

We have become a nation of information consumption with our technological advances. We judge other cultures when ours is also a culture of animal consumption. In the defense of cattle consumption versus dolphin consumption, at this time cattle are not at the risk of extinction. So the question remains, why does this senseless slaughter of dolphins still occur? For as long as people will inhabit this Earth, there will be questionable practices of not only what we eat but of how we live. I am not a supporter of this, but on the same hand I must say I enjoy eating beef. 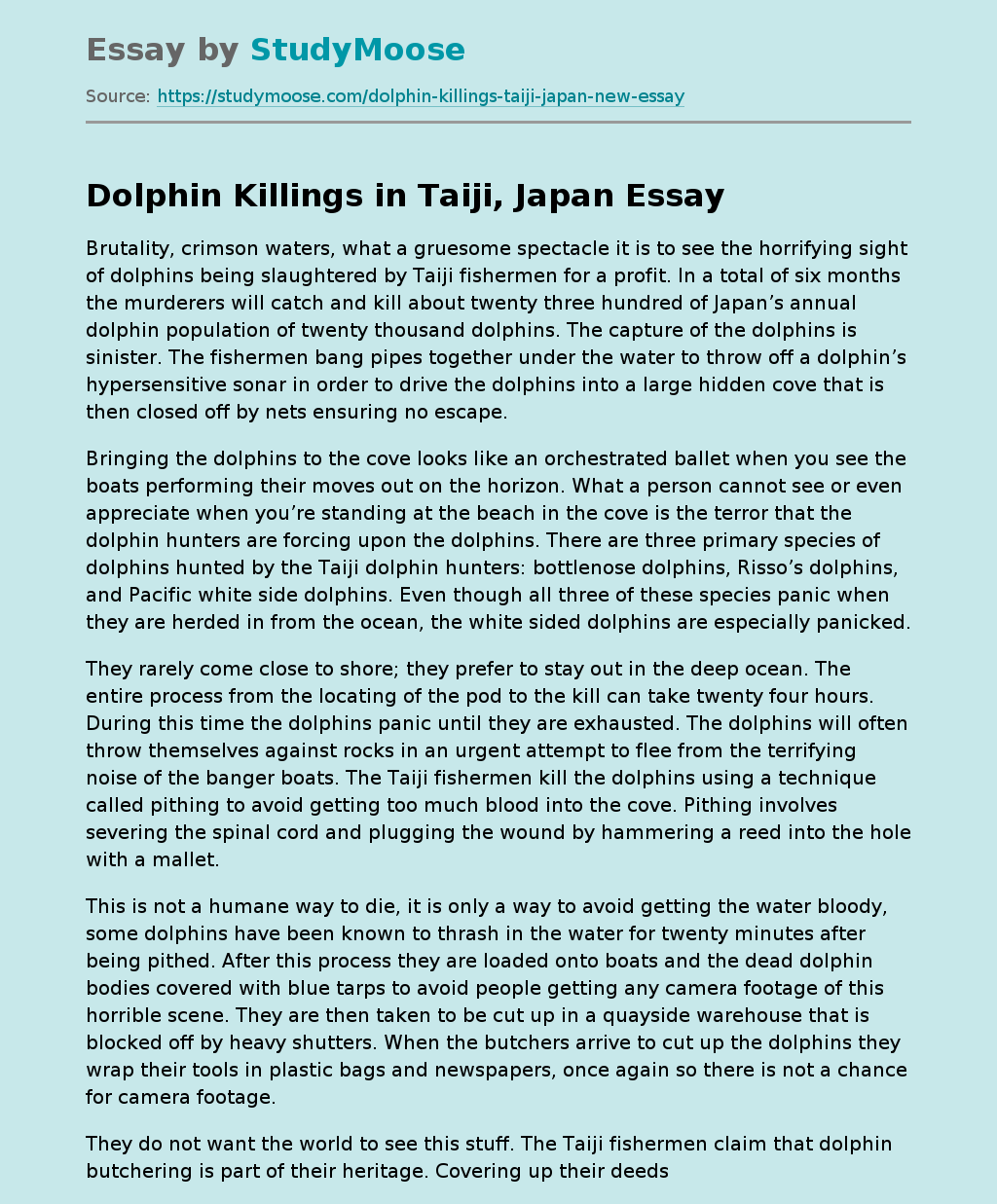