What does Nora showing Dr. Rank her new stockings symbolize?

This symbolizes how women were thought to be in the Victorian era. Showing Dr. Rank her stockings which were part of her clothes that was not normally acceptable to show to a man you were not married or related to. By doing this, she shows how women were supposedly flirty and coquettish. She plays into the belief that women cannot be serious and that they toy with men’s hearts. She also shows the belief that women would flirt with men in order to get their own way which Nora was doing when she showed Dr.

Don't use plagiarized sources. Get your custom essay on
“ A Doll’s House Quiz Act II ”
Get custom paper
NEW! smart matching with writer

Rank her stockings. By doing this, she is participating in the belief that women will use their body in order to get the things they want. The stockings are a symbol of the few ways women in the Victorian era could obtain power.

“Where’s my little skylark?’ ‘Here she is!’”(50).What does this dialogue between Torvald and Nora say about society?

This quote shows the role of women in Victorian society.

By casting off all her worries and going straight to Torvald when he calls, Bora shows how women were expected to act. Women were expected to defer to men’s wishes and do whatever they want. Nora shows that she is conforming to that expectation when she drop her worries, puts a smile on her face and comes to Torvald despite the fact that the way Torvald called for her is belittling.

What do you believe Nora means by the quote “.

.There are some people one loves best and others whom one would almost always rather have as companions” (39).

Nora is saying that there are some people that you love a lot, like your family, but you do not necessarily like them and there are others that you enjoy their companionship a lot but do not love them the most. By saying this to Dr. Rank she is effectively saying that he is a friend and that she enjoys his friendship but does not love him. Also by saying this, the audience is beginning to see the further cracks in her relationship with her Father and Torvald. This quote foreshadows what happens in the third act of the play when Nora leaves Torvald. This quote shows that Nora’s marriage is not as happy as it appears.

At the beginning of Act II, it says that “The Christmas tree is in the corner by the piano, stripped of its ornaments and with burned-down candle ends on its disheveled branches”(29). What does this symbolize? 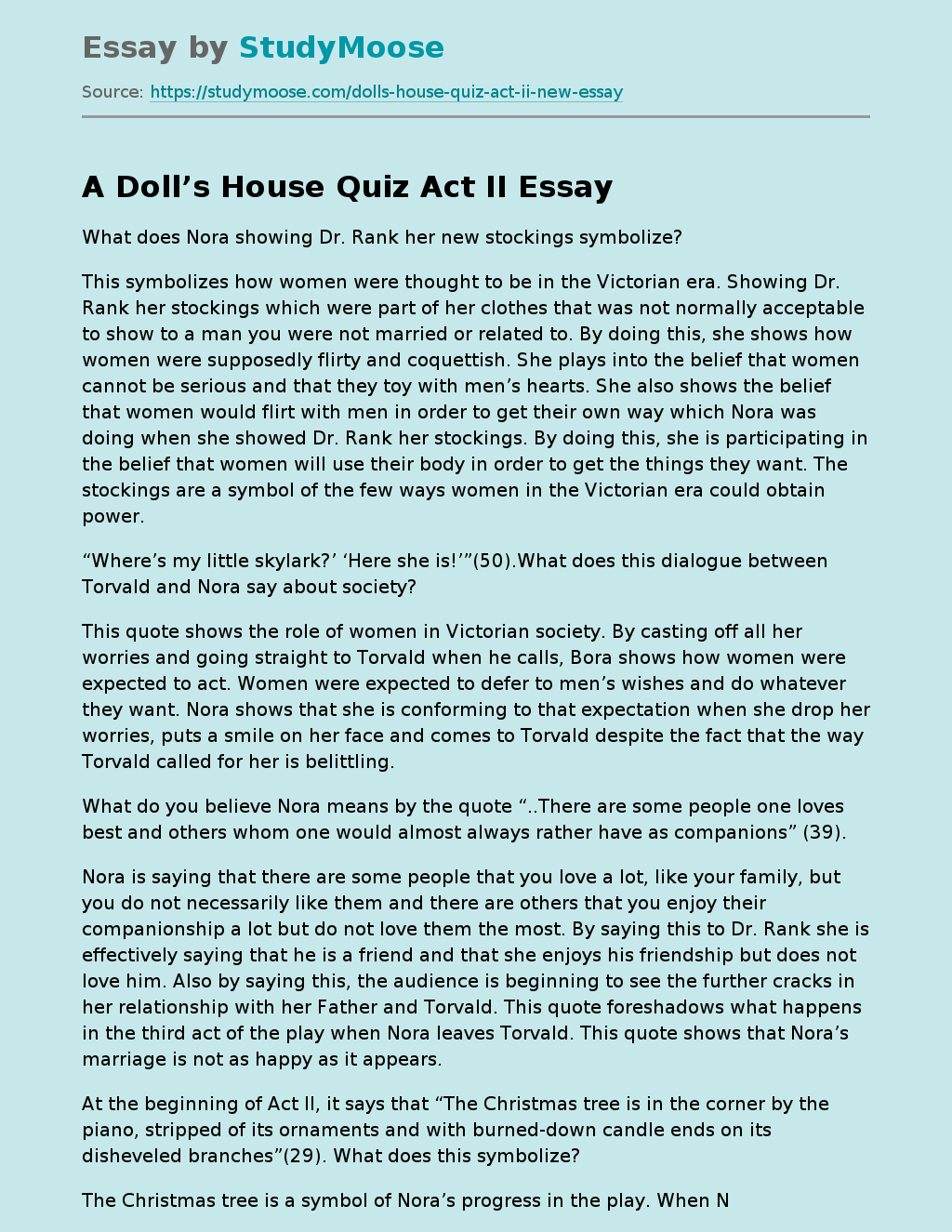