A Doll’s House, by Henrik Ibsen

An examination of ornamental symbols used to reinforce character in A Doll’s House.

Henrik Ibsen’s, A Doll’s House is a comprehensive exploration of many controversial issues of his day, being immediately recognized as a scandalous piece of work when released in 1879. The play becomes the starting point of the post-Romantic era, with the concept of a realistic style used to portray the identities of various characters. By the description of the minimalistic, yet powerful types of symbolic objects, multiple aspects of the story are strengthened and reinforced.

Don't use plagiarized sources. Get your custom essay on
“ A Doll’s House, by Henrik Ibsen ”
Get custom paper
NEW! smart matching with writer

One such aspect involves the characterization of women. In the play, Ibsen’s use of ornamental symbols is crucial in developing Nora’s physical and psychological portrayal in her dysfunctional, marital relationship with Torvald.

The representation of Nora’s physical and psychological state in her relationship is developed with the symbolic use of the Christmas tree, her dresses, and the dollhouse imagery.

The Christmas tree, primarily used as a decorative ornament for the festive season, is seen to facilitate the development of Nora’s character both physically and psychologically in her inadequate relationship with Torvald. The tree is representative of Nora’s being as a centrally visual object, directly relaying false appearances of reality she imposes in the household, and ultimately in society. With the first line of the play, Nora instigates strict importance on how the Christmas tree is not to be exposed, as she wishes that “the children do not see it until this evening, when it is dressed” (1).

Similarly, Nora assures Torvald that “nobody is to have the chance of admiring [her] in [her] dress until tomorrow” (47). The comparison between the tree’s appearances directly relate to that of Nora’s situation: she does not want the tree to be seen in its lowly, petty state without any decorations, just as she only wants to be perceived as a praiseworthy woman dressed in beautiful clothes for the eyes of Torvald and the society.

Her desire to hide the true, pure forms of existence, as symbolized by the tree, allows the reader to come up with a pertinent link to her actions in hiding information in her relationship with her husband. In Act one, Nora becomes aware of her fraudulent actions by forging her father’s signature. Once Krogstad first informs her of the major fraud she has committed, she fails to accept it and instead believes in her positive motives towards Torvald and her father. Immediately after Krogstad takes his leave, Nora begins dressing the tree with panic and depression as she exclaims, “a candle here – and flowers here – The horrible man! It’s all nonsense – there’s nothing wrong. The tree shall be splendid!” (25). The dressing of the Christmas tree at this moment is crucial in displaying the psychological conditions she is in. While she is decorating the tree and transforming it from its pure form, she is in simultaneous thought of how she will make certain that her critical situation remains hidden from Torvald by subsequently stating, “I will do everything I can think of to please you, Torvald!” (25). The frantic way she is trying to make the tree appear ideal in the eyes of the children symbolizes the actions she will take to hide her own dilemma, causing her relationship with Torvald to be less truthful in nature. In attempt to hide the reality of the circumstance, the tree is thus seen as a parallel to Nora’s character as she unknowingly adds to the deterioration of her marital relationship.

Similar to the dressing of the Christmas tree, Nora’s fancy dresses are also essential in developing her portrayal in her marital relationship. The dresses that Ibsen describes throughout the play are subtle ornaments used to display her physical position in the marriage. For instance, when Mrs. Linde suggests that Nora should tell Torvald about the secret of the fraud, she smiles and states that she will do so when he is no longer as devoted to her as now, or “when [her] dancing and dressing-up and reciting have palled on him” (12). Nora is relying on her dresses to play a role of the ideal objects that will continue to cause Torvald to be fond of her physical beauty. She is proposing that only when she becomes old and unattractive that her dressing will no longer be of use to act as the underlying cause for the role of a wife for him. Accordingly, it is revealed that the relationship between them is merely a superficial one. Their relationship only has to do with Nora’s fancy dressing to please Torvald’s sensual desires, devoid of actual love and compassion.

Nora can further be seen as a plaything to her husband when she wishes for Torvald to choose a dress for her in a flirtatious manner. Evidently, she says, “There is no one has such good taste as you…Torvald, couldn’t you take me in hand and decide what I shall go as, and what sort of a dress I shall wear?” (26). Nora is placing much importance to his approval of a dress, depicting how imperative it is for her to look wonderful in his eyes. In turn, Torvald is thrown into a state of erotic fascination as she dances in it, reinforcing the idea of her physical representation in their relationship. The only way Nora is capable of pleasing Torvald is with her elegant dressing up and dancing, thus outlining her exposé as a wife in only a physicality of the dress and as an embodiment of her being. Interestingly, Nora herself wishes to tear the dress into a hundred thousand pieces, thus proving how she detests the façade the dress puts on for Torvald. The relationship is considered to be dysfunctional because of the fact that Nora has only the role of physically pleasing her husband, while at the same time evading the cardinal components of love and compassion found in a true marriage.

Ibsen’s use of the dollhouse ornament that develops Nora’s physical and psychological portrayal can be examined as a final symbol that is implemented during the closing act of the play. In Act three, Nora finally comes to a realization of her inferior position in the Helmer household as she says, “our home has been nothing but a playroom. I have been your doll-wife…and here the children have been my dolls” (67). According to Nora, Torvald has committed a great sin against her by withholding her from pursuing a womanly character that she subconsciously desires the whole time. The symbolic use of the dolls and the playroom that Nora expresses in her dialogue with Torvald represents an entirely separate realm of reality that she considers she was living in. The doll represents her being not only as Torvald’s physical entity, but also a plastic or glass figurine found in a child’s playroom. The simple object is a child’s toy, filled with a bleak representation of the real world.

The doll and the dollhouse are fake items which attempt to better represent real life objects, showing limited signs of flaws, similar to Nora’s understanding of her relationship. Like the dollhouse containing a doll, Nora has been portrayed as a physical object who, in her relationship, does not get involved further than pleasing Torvald’s father-like attitude towards her. Once Torvald’s fear of his reputation being at stake due to Nora’s fraud was over by reading Krogstad’s letter of repentance, he suddenly changes his tone towards her. He goes back to behaving like she was his “little skylark, [his] doll, which [he] would in future treat with doubly gentle care, because it was so brittle and fragile” (70). Nora torments herself in thinking of the time she passed with a man who was such a stranger. Torvald’s treatment of her as a doll represents Nora’s psychological state as being ‘brittle’ and ‘fragile’, similar to that of a glass doll. Although she did not directly display such a mental state, it was apparent as her only hope in her marriage with Torvald was perhaps in raising her own children also as dolls, just as she was raised by her father and Torvald. Thus the dollhouse scenario that Nora discusses as a final release of her psychological feelings displays both her mental and physical involvement in a meaningless relationship with her husband.

The way that symbols can be used as an effective literary technique is evident in Henrik Ibsen’s, A doll’s House. Ibsen is subtly able to incorporate various symbols, grouped together as household ornaments, in developing both the physical and psychological portrayal of the central character, Nora. After exploring such symbols of the Christmas tree, her dresses, and the dollhouse imagery outlined in the final act, it can be concluded that Nora’s depiction as an unsatisfied woman in her marital affiliation with Torvald was put to a more heightened level. Considering Ibsen’s use of this literary effect, it can be made certain that the development of Nora’s physical and psychological aspects throughout her dysfunctional relationship with Torvald have been crucial in contributing to the play’s realistic style, giving it both success and a topic of great controversy.

A Doll’s House, by Henrik Ibsen. (2020, Jun 02). Retrieved from http://studymoose.com/dolls-house-henrik-ibsen-new-essay 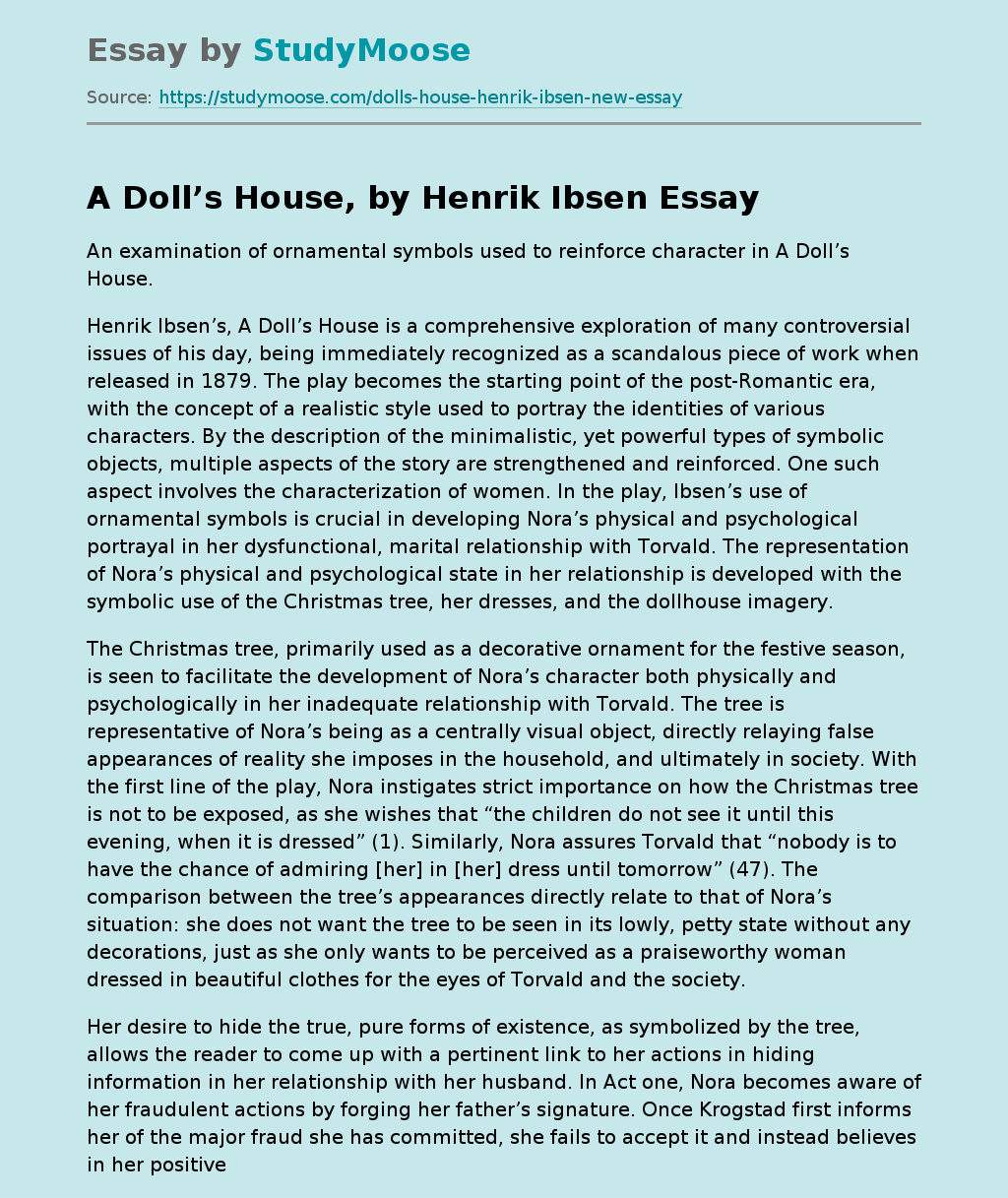