Does Robert Louis Stevenson explore the duality of human nature in Dr. Jekyll and Mr Hyde

Written between 1884 and 1887, Robert Louis Stevenson’s novel, “the strange case of Dr. Jekyll and Mr Hyde”, is about a well respected physician and his ‘other self’ Mr Hyde. Dr. Jekyll is described as a typical Victorian gentleman . [PD1]

Dr Jekyll wanted to develop a potion because he believed he could create a perfectly righteous human being by destroying the evil of the mind and body. When he creates this potion, it doesn’t quite go according to plan. He takes the potion for the first time, but when he goes back to normal, he turns into Mr Hyde without taking the potion.

Don't use plagiarized sources. Get your custom essay on
“ Does Robert Louis Stevenson explore the duality of human nature in Dr. Jekyll and Mr Hyde ”
Get custom paper
NEW! smart matching with writer

Slowly, Mr Hyde starts to take over Dr Jekyll. When Dr Jekyll turns into Mr Hyde, it changes his appearance, because of this, no one wants to approach him or talk to him. During the time when the book was written, people who looked different or who had disabilities or deformities which are widely accepted today, were not liked and were usually shut away.

This is why no one liked or talked to Hyde.

There is proof of this in the lines “I had taken a loathing to the man at first sight” and “gave me a look so ugly, it brought out the sweat on me like running”. Dr Jekylls idea was that everyone had two sides to them, a good side and an evil side, a side of joy and a side of despair; there is a Mr Hyde in all of us. This was not the only novel of this time that hinted at duality, there were a few of other main plays.

Two examples are Deacon Broodie, and Markheim, which is a short story. In the Victorian times, most people had very high morals, and so immoral things were rarely mentioned or talked about. Also, sex is rarely talked about in the book because everyone had such high morals, and so sex is something which would not be written and so was kept away from the public eye. [PD2]

Throughout the novel, figurative language is used in various forms. One of the forms used is personification. Personification is used in many ways to try to help the reader to relate to the book, characters, and objects in the book. Another way figurative language is used is in the form of “similes” by saying things like “You start a question, and it’s like starting a stone. You sit quietly on the top of a hill; and away the stone goes, starting others; and presently some bland old bird (the last you would have thought of) is knocked on the head in his own back garden and the family have to change their name. No, sir, I make it a rule of mine: the more it looks like Queer Street, the less I ask.”[PD3]

The novel was written when the world was not very advanced medically. In the world today, we know of illnesses such as schizophrenia. It is thought that the novel was written about someone who had schizophrenia which would be treated with medication nowadays. jekyll and hyde were indeed the same person and Dr Jekyll didn’t really have “an evil side” to him, it was just because he had a split personality disorder.

Does Robert Louis Stevenson explore the duality of human nature in Dr. Jekyll and Mr Hyde. (2017, Nov 04). Retrieved from https://studymoose.com/does-robert-louis-stevenson-explore-the-duality-of-human-nature-in-dr-jekyll-and-mr-hyde-essay 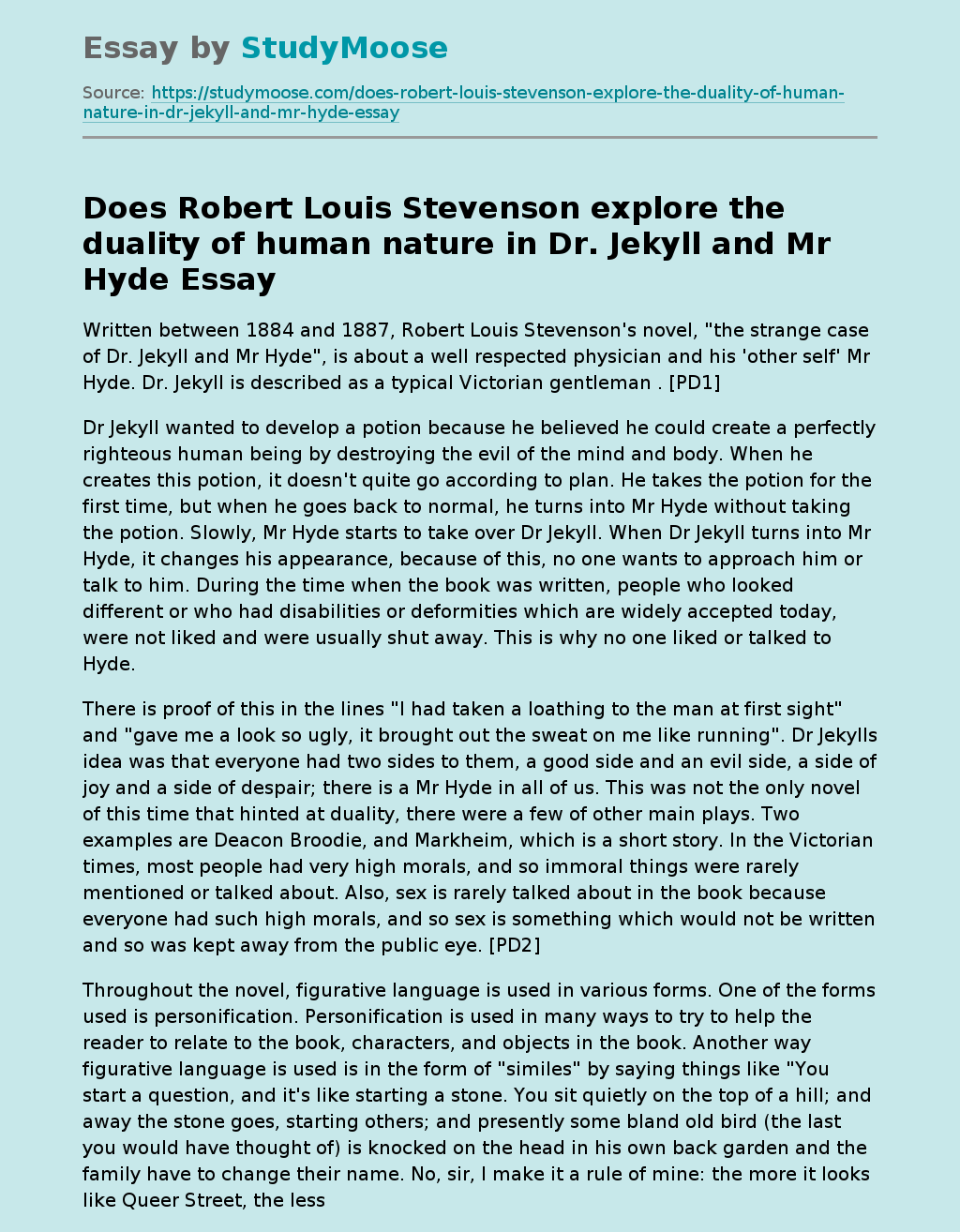