“97% of rapists will never spend a day in jail,” (Hauslohner paragraph 37). While this number is high, far too many people are not shocked after hearing this statistic. Many people believe that rape is not properly investigated or punished; however, many college campuses have policies and procedures in place in order to punish rapists and get justice for victims. It tends to not be a problem just on college campuses, but a nationwide crisis.

In Mark Edmundson’s piece “Who Are You and What Are You Doing Here?”, he claims that colleges do not do enough, if anything, to punish rapists.

Don't use plagiarized sources. Get your custom essay on
“ Does Rape on College Campuses Go Unpunished ”
Get custom paper
NEW! smart matching with writer

“Colleges are even leery of disciplining guys who have committed sexual assault, or assault plain and simple. Instead of being punished, these guys frequently stay around, strolling the quad and swilling the libations, an affront (and sometimes a terror) to their victims,” (Greene 408). In this quote, Edmundson claims that rapists are allowed to walk freely on campus after such brutal attacks and assaults, and nobody says a word.

However, Edmundson has no backup for this claim, he simply switches to his next topic, not thinking twice about what he has just said. There is no data or evidence to show that his claim has been researched. For all the reader knows, this could simply be an opinion.

According to a 2015 report given by the National Sexual Violence Resource Center, one in five women and one in sixteen men are sexually assaulted on campus. However, according to the same report, more than 90% of all sexual assaults on college campuses go unreported.

If a case goes unreported, there is no way for the victim to get the help and justice that they deserve. However, there are many reasons that sexual assaults and/or rapes go unreported. Some victims fear that their attacker will attempt to harm them again if they go to the police. Others who may know their attackers may not want to get them in trouble. Unfortunately, many cases go unreported because victims do not feel that their case is important enough or that anything can be done about it. This type of stigma is the reason that so many rapes go unpunished. If a rape is not reported, or even reported too late, there is only so much that law enforcement can do to prosecute the criminal. After a certain period of time, most if not all evidence that a crime has been committed has been destroyed or ceases to exist.

The stigma that colleges will not do enough if anything to serve justice against rapists comes from some popular cases, such as the recent Brock Turner case. Brock Turner was a student at Stanford University. Turner was a star swimmer on the school’s team. On January 18, 2015, two graduate students saw a man behind a dumpster on top of an unconscious woman. Both the victim and Turner were intoxicated after attending a party earlier in the night. Turner was convicted of three felonies – sexual penetrating an intoxicated person with a foreign object, sexually penetrating an unconscious person with a foreign object, and assault with intent to commit rape of an intoxicated woman. Originally, prosecutors asked that Turner serve six years in jail. However, he was sentenced to only six months, because the judge believed that any extra time would ruin Turner’s reputation and future career opportunities. This decision angered millions of people across the country. It raised the question from many of why the judge felt the need to go so lightly on the perpetrator, when the victim would likely be suffering for a great deal of, if not the rest of her life.

When people, such as Edmundson, want to prove that there is a flaw, they tend to focus on the negatives, and leave out the positives. In order to properly look at an issue, we can not leave out one side just because it does not fit our agenda. After Vanderbilt authorities accidentally found disturbing footage on security cameras, a case began against four of the school’s football players for the rape of an unconscious 21-year-old female. Unfortunately, it took just under two years for two out of the four students to be convicted; however, they were convicted of five counts of aggravated rape and two counts of aggravated sexual battery. This case is often seen as a starting point for a “national movement to overhaul training and prevention efforts on college campuses and elsewhere,” (Tamburin Paragraph 7). This is great news, because it gives hope that there will soon be reform and better action taken against people who commit such heinous acts as rape, especially on college campuses. The fact that these students are athletes make the case even more promising for the future of rape cases. In many previous cases, athletes are given leniency because they are believed to be an essential part of the campus population. However, which college would be more appealing, a college who has star athletes that get away with rape and sexual assault, or a college with slightly less talented athletes who do not commit such crimes? Where would a parent be more comfortable sending their child?

Looking back on Edmundson’s claim, he blames colleges for the inability to punish perpetrators in cases of sexual assault. However, it tends to be a flaw in the national system, not just college campuses. According to a report given by the FBI, in 2016 rape offenses increased by 4.9%, compared to 2015 statistics. According to the 2014 Criminal Victimization Report given by the United States Department of Justice, the percentage of cases of rapes that are reported to the police is decreasing. In 2003, 35.1% of rapes were reported. That number decreased by 2013 to 34.8%, and again in 2014 to 33.6%. As the years go on, it seems as though less people feel comfortable reporting crimes such as rape and sexual assault.

The reasons remain the same as to why victims do not report rapes whether it is on a college campus or out in the real world. Fear, lack of confidence in the system, and so many other factors continue to contribute to the lack of reported sexual assault and rape. Many victims feel as though if they report their assault, they will be forced to go through a lengthy and humiliating trial in which the odds are against them. In criminal justice, one must be able to prove without a reasonable doubt that a crime has been committed. In cases such as rape, there is very little evidence that can be made available to the prosecution team. There are many variables that can affect the trial and cause for the victim to not win the case. For example, if the victim was unable to report the rape in a certain amount of time, all forensic evidence could be destroyed. If the victim does not get a rape kit within 72 hours, the evidence may not be viable; a huge portion of a rape kit is the forensic evidence. Another factor that could make it nearly impossible to identify the rapist if they were male is if they wore a condom. When the rapist does so, this makes it virtually impossible to get any DNA, which also makes it very difficult to identify the rapist without a reasonable doubt. In the case of most rapes, there are no witnesses. Therefore, the prosecution team must rely solely on forensic evidence and the testimony of the victim.

College campuses have begun to do more and put in place more policies in order to protect victims of rape and sexual assault. One example is Title IX. “Title IX is a federal civil rights law that prohibits discrimination on the basis of sex in any educational program or activity that receives federal funding,” (“Title IX” Paragraph 3). Under the Title IX law, in any case where a student faces a hostile environment due to sexual assault or rape, the school must prevent reoccurrence of the event and address the effects of the event. Many campuses see to it that all campus faculty and staff are held responsible for addressing problems of campus sexual assault. Single officials or offices are appointed to deal solely with sexual assault and rape. Prevention programs, such as classes and lectures, are provided on campus. Many campuses have a zero-tolerance policy, which makes it known that in the case of sexual assault or rape, if the accused is found guilty, there is an automatic expulsion.

The problem tends not to lie solely on college campuses. The problem tends to be with the system in general. The system for sexual assault and rape is flawed. When it is shown in many reports that victims are scared to come forward after being assaulted, it should be very clear that the system needs to be reevaluated. There needs to be more success stories than horror stories when it comes to reporting rapes or assaults. Victims need to feel confident in the authorities that they are seeking help from. The problem does not lie in campus policies, it lies nationwide. It must be changed. We must stop victim blaming and victim shaming. We must make it so victims are not too uncomfortable or afraid to come forward. It is shameful that as a country we would rather ask “What was she wearing?”, “How much did he/she have to drink?”, “Were they flirting with the defendant?”. We should instead be asking “Why did the attacker believe that they could get away with it?”, or “What can we do to help the victim?”. The conversation must be changed, or there will be no hope for future victims, and these crimes will continue to occur, and will unfortunately occur more frequently. 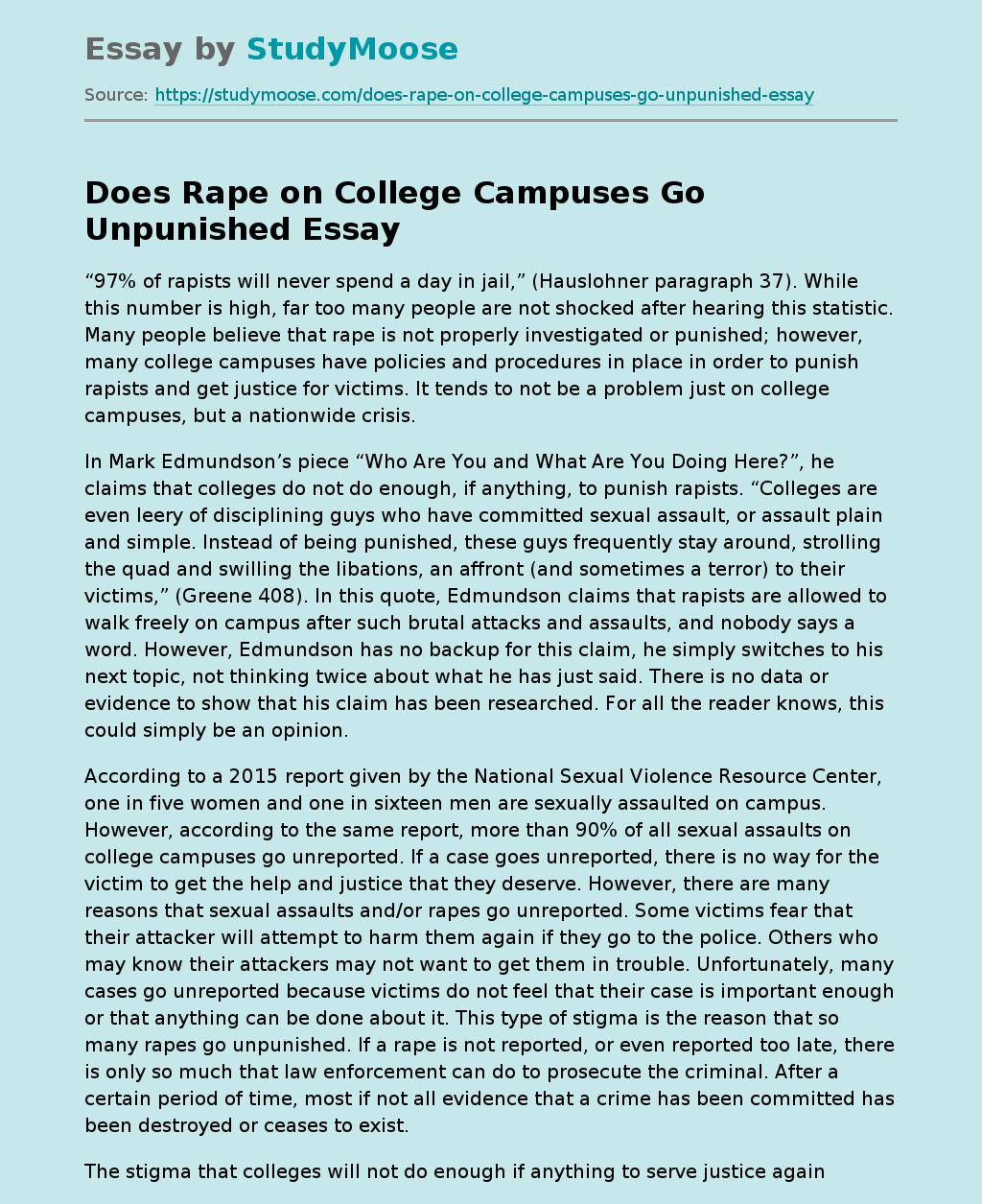