1.Does modern technology make life more convenient, or was life better when technology was simpler?

First of all, I am always a person who believe in science and technology, so certainly, my answer is sided with modern technology. Yes, it does make our life much more convenient for so many reasons. Firstly(time), modern technology has greatly helped us save time and energy. And this started from the time of steam machines. People now use trucks to transfer goods instead of wagons, which, in this case, is the best example to support my point of view.

Turn in your highest-quality paper
Get a qualified writer to help you with
“ Does Modern Technology Make Life More Convenient ”
Get high-quality paper
NEW! AI matching with writers

There are so many machines and robots help us do the things we could never do or significantly promote the work efficiency.And by that mean, we achieved industrial revolution which, secondly(Economy), boost the international economies, so we are seeing every nation is actively applying new technologies to help promote its productivity and competitiveness. Thirdly, modern technology like Internet really have helped us a lot.

Proficient in: Challenges Of Modern Life

Some people even believe that internet can do anything. Communication is more accessible, merchandise is more accessible, the whole world is more accessible. With a simple click of the mouse, we could travel the world, we could take classes from the top universities without actually be there on campus, we could talk to our friends and family face to face even if we are thousands miles apart. Consequently, modern technology has influenced every aspect of our lives, from the food we eat everyday to the clothes we wear, from the house we live to the vehicles we drive, it does make life more convenient, modern technology helps us live a easier and better live.

2. What are some of the positive and negative effects that mobile phones have on society?

With the development of modern technology, mobile phones are not some rare phenomenon any more, from the kids to the olds, every one has a phone, that also makes China who has the most mobile phone users in the world. First, it’s small enough to fit in your pockets and portable to carry it wherever you go. Second, you can use the phone to talk to, or send messages to others anytime,anywhere as long as you know the number, thus it is very accessible to communication. But, theses functions are not the highlights of modern mobile phones. In modern time, phones are not the phones just to make a call to communicate with people, it has also become a super tool which you can use for so many different purposes, it is like a computer, but mini version. It is a new type of entertainment, we can play games, listen to music, watch movies on the phone.

It is a good work assistant, we can send emails, edit files and set reminders etc. It is a good helper, connect it to the internet, we can surf internet, online shopping or even pay the electricity. Anything, anytime, that is the highlight of modern mobile phones. However, owning to these fantastic functionalities, cellphones are becoming a distraction, an addiction.People seem to unable to get mobile phones out of their hands. I am not sure if you have had this situation. You go out with a bunch of friends, there’re always some people playing with phones instead of talking to people. Gradually, they will fade out his/her social circles and be absorbed in the phone world and they seem unable to escape from it. As a result, they will have a bad performance at school or at work because they waste too much time on the phones.

Some are calling for those people to put down phones to fit in their circles. Phones are made to diminish the world and make people get closer with each other, not to isolate people. Moreover, phones are not good for health. If we spend too much time on the phone, the radiation from the phone would harm our health, particularly teenagers who are at the golden stage of physical growth. Last but never the least, money is always a big problem, phone bills including text messages, minutes and data usage altogether would be a big financial burden for you every single month. Above all are the advantages and disadvantages about mobile phones, a typical double-edged sword, whether it is a poison or a weapon, it all depends on if we use it wisely.

For modern technology:
1. Modern transport means make it very convenient for people to travel far or near, thus saving a lot of time and energy. By plane, people can cover a distance of one thousand miles within hours. 2. Modern science and technology promote the productivity, freeing people from tiring and vexing manual and mechanical labor. Many kinds of heavy dangerous work have been done by computerized machines more efficiently and more quickly. People can be released from toils and enjoy much more leisure time and freedom. 3. Modern household appliances release people from heavy house chores. Refrigerators, washing machines, and microwave stoves have made housekeeping so much easier that women can pursue their own careers without neglecting the duties of a good wife and mother.

4. Modern devices of telecommunications to a great extent facilitate and enhance the exchange of information between people. Modern technology has ushered in a brand new era of global information.

5. Modern science and technology are emotionally beneficial. A phone call, an e-mail or a fax bring people closer and make the world smaller.

6. Modern technology enables us to be informed of the events worldwide without moving a step away from our home. The human knowledge multiplies at an incredible rate. Modern people enjoy unprecedented access to information worldwide. 7. Advancing medical science has made it possible for human beings to lead a much longer life and suffer less from different kinds of diseases. Doctors and sciences have found cures for many diseases formerly regarded incurable and fatal. 8. The coming of electricity has removed darkness and the world has been transformed into a well-illuminated paradise.

2. People used to enjoy a better environment and there was little pollution.

3. Compared with the present deterioration of morals and social mood and worsening human relationship, people used to enjoy a simple
and honest human relationship. They were completely free from modern day stress and pressure.

4. People would never worry about the risks brought by modern technology, such as computer virus, nuclear leakage, global warming, exhaustion of nature resources and extinction of many species. They would not be slaves of machines one day.

What are some of the positive and negative effects that mobile phones have on society? In less than twenty years, mobile phones have gone from being rare and expensive pieces of equipment to a popular low-cost personal item. Positive:

1. People rely on their mobile phone address book to keep in touch with friends.

2. In many young adults’ households the mobile phone has replaced land-line telephones.

3. It has given poor people in isolated community access to services such as medical and legal advice.

4. Mobile phones with Internet access can provide you services such as alerts, weather information, e-mail, search and downloads of games and music.

5. The mobile phone itself has also become a fashion object, with users decorating their mobile phones to reflect their personality.

6. Mobile phone network is the fastest way to warn citizens of disasters like earthquakes, typhoon and other natural disasters.

7. In the event of an emergency, disaster response crews can locate injured people using the signals from their mobile phones.

8. Mobile phones can help the victims call the police or an ambulance immediately for help when an emergency occurs. Negative:

1. Mobile phone use while driving is common but controversial. Using the hand-free phones or the use of Bluetooth while driving can increase the risk of road traffic accidents, let alone the hand-held ones, because the distraction of a telephone conversation itself is a significant safety problem. 2. In Croatia law prohibits usage of mobile phones while crossing the road as a pedestrian. 3. Since the introduction of mobile phones, concerns have been raised about the potential health impacts. 4. Long term studies show that mobile phone radiation exerts negative influences on humans, and in particular children.

People using mobile phones are more likely to get brain cancer and cardiovascular diseases. 5. A study by the International Agency for Research on Cancer of 4,500 users found a significant link between tumor frequency and mobile phone use.

6. Users often speak at increased volume in places like book shops, libraries, movie theatres, which may disturb people around. 7. It’s dangerous to use mobile phones on aircraft due to possible interference with aircraft radio communications. 8. A large number of class disruptions may result from the use of mobile phones in the classroom.

9. Text messaging has a close relationship with the potential cheating on examinations. So, in the UK, possession of a mobile phone in the examination can result in immediate disqualification from that subject. 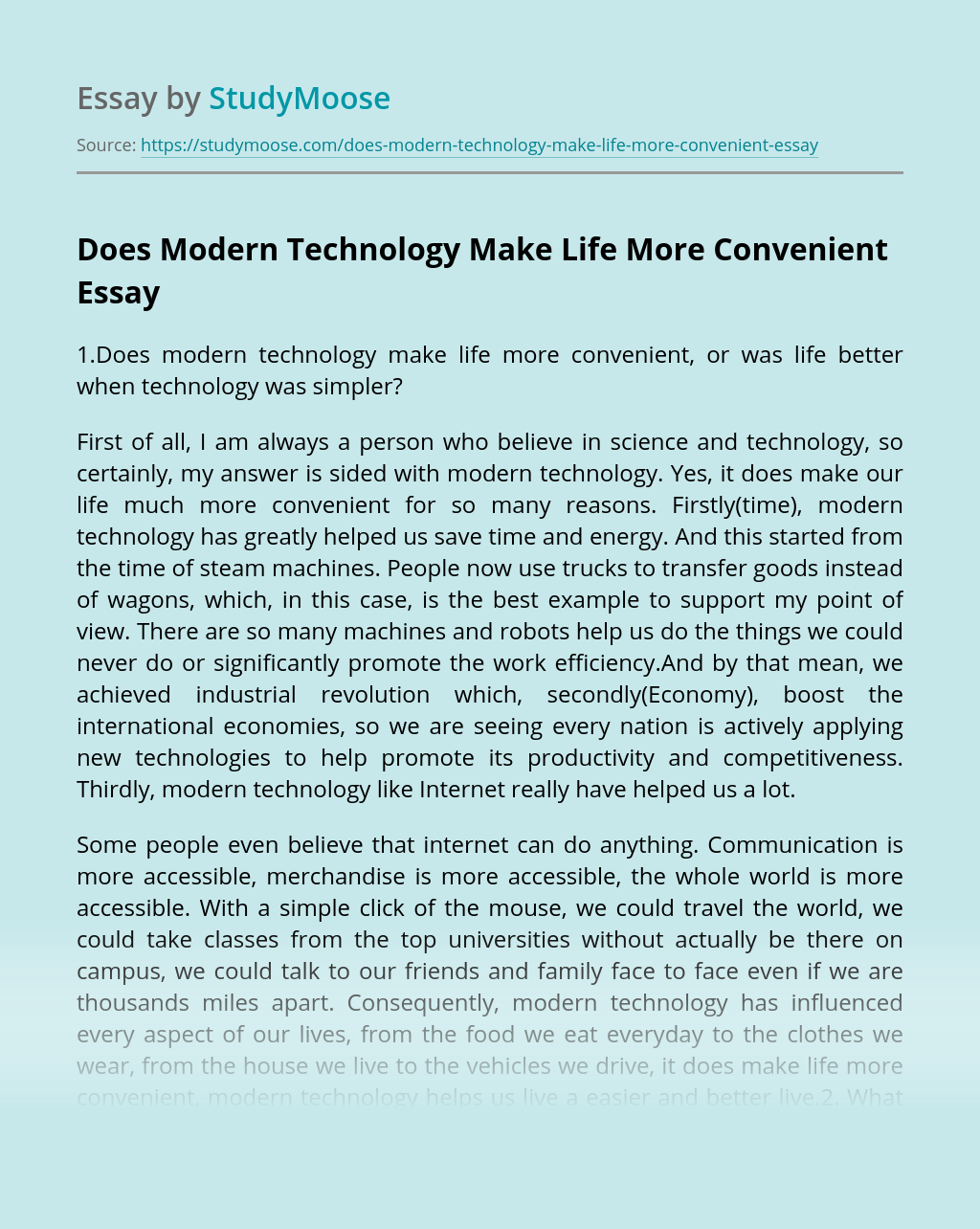 Turn in your highest-quality paper
Get a qualified writer to help you with
“ Does Modern Technology Make Life More Convenient ”
Get high-quality paper
Helping students since 2015
Stay Safe, Stay Original