Does FBI Bring Safety or Not

One of the most important jobs that the FBI does is to chase and follow dangerous serial killers who in danger their society.

Turn in your highest-quality paper
Get a qualified writer to help you with
“ Does FBI Bring Safety or Not ”
Get high-quality paper
NEW! AI matching with writer

One example of that is catching the train serial killer. Rafael Martinez or Angel Martinez, who was hiding in other country which, makes the other police agencies incapable of getting him back. In addition, another important job that the FBI does is to check and control other police agencies if they fail to function as they supposed to be functioned.

The FBI makes it almost impossible for some police members to be corrupted. An example of that, March 12, 1999, where the FBI caught some border patrol points corrupted. The corruption among US forces along the Southwest border as a serious and growing problem, according to the Fort Worth Star-Telegram.

The number of such cases investigated by the FBI went from 79 in 1997 to 157 in 1998; therefore, the FBI is trying to stop every corruption possible in other police agencies.ƒxƒx In the other hand, the FBI as a strong agency makes it dangerous to the society.

Some times, we see the agency over reacts by dealing with civilians that agency thinks that they are endanger people in a harmful way. For example, we saw how the FBI was denying for six years that they did not use pyrotechnic devices capable of starting the fire and burned down the Branch Davidian Compound near Waco in April 1993.

In addition, the non-supervising job that the agency has that makes it very hard to be investigated subject if there are some king of corruption. We all know that the ability of check and balance that every agency has over the other is very important. It limited the power of one agency more than the other that makes it impossible to have a powerful control over all. Having too much power is dangerous. Some sick people might get that power and use it in some harmful ways that no one can stop them because they are too strong. For example, the department office of inspector general or OIG cannot obtain investigation without permission of the deputy authority general of the attorney general.

Finally, I think that we can make the FBI more effectual and helpful if we change two major things with the FBI system. First, we must let the local police department to handle civilians instead of the FBI using all means of forces. Just let the FBI supervisor on that local police department and assist them if they need more help. For example, the incident which Weaver’s wife and son and US marshal. They were killed could be handled by the local authority without using too much forces against covalence. In addition, we must make other agents or sectors like OIG to check the FBI of any kind of corrections. For example, In Waco incident those 80 people were killed because of irresponsible orders and disposition orders by other agencies. We had to have some kind of authority which they can check and see who is the on who was responsible for ordering the gas to be thrown at that time not keep it secret for six years.

In conclusion, I think that the FBI is not a very good agent that works for the people. Instead, they work most the times against us. I believe that the FBI is an anti-American gang of racketeers who break our laws with impunity because they have succeeded in corrupting our politicians and many of our law-enforcement people as well. We should all fight that agency because the next victim of their mistakes could be you or me. God Bless America.

Does FBI Bring Safety or Not. (2016, Jul 22). Retrieved from https://studymoose.com/does-fbi-bring-safety-or-not-essay 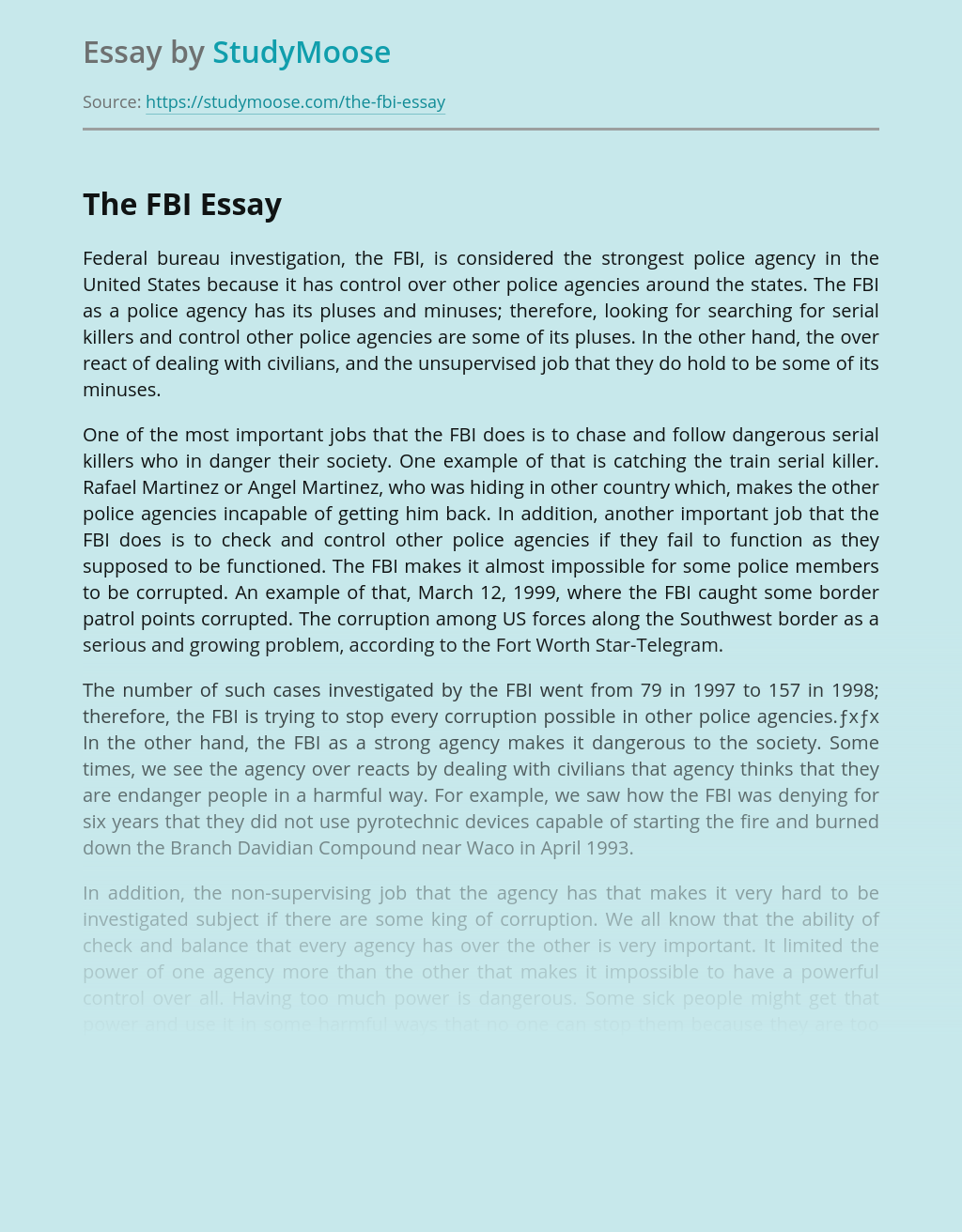 Turn in your highest-quality paper
Get a qualified writer to help you with
“ Does FBI Bring Safety or Not ”
Get high-quality paper
Helping students since 2015
Stay Safe, Stay Original