Employees have moral obligations to respect the property of the corporation, to abide by employment” onmouseover=”window.status = ‘goto: employment’;return 1″ onmouseout=”window.status=””>employment contracts, and to operate within the bounds of the company’s procedural rules. However, the duty of loyalty is not absolute. That an employee should be loyal is a prima facie duty. The object of the employee’s duty must be deserving if the duty is genuine and overriding rater that prima facie. Many of the moral grounds for employee loyalty have been destroyed.

Don't use plagiarized sources. Get your custom essay on
“ Does Blowing the Whistle Violate Company Loyalty? ”
Get custom paper
NEW! smart matching with writer

Yet there are some minimum requirements of loyalty based in law. The whistleblower may feel they face a conflict between loyalty to their organization and loyalty to the public. The fact is that loyalty to an organization stems from an acceptance of its objectives. However if the objectives involve breaking the law it is difficult to see that there’s any loyalty obligation. The public interest comes first. The Insider begins with Lowell Bergman (Al Pacino), a producer for “60 Minutes”, searching for and obtaining interviews with important people in newsworthy situations.

One day, he receives a box full of technical books” onmouseover=”window.status = ‘goto: books’;return 1″ onmouseout=”window.status=””>books pertaining to the temperature of burning cigarettes and the like. Unable to comprehend anything in the manuals, he asks Jeffrey Wigand (Russell Crowe), head of research at Brown & Williamson, to translate everything. However, Bergman begins to believe Wigand has something more to say. Turns out, Wigand was fired from his job for being a little too vocal on certain issues.

Unfortunately, Wigand has signed a confidentiality agreement with B&W that prohibits him from revealing secrets about his old employer. Bergman has to find a way around the confidentiality agreement, or jeopardize Wigand’s family and future. Ultimately, it’s Wigand’s decision: does he tell all and go to jail, or does he stay silent and leave Americans in the dark? The rest of the film is propelled by CBS’ decision not to air the interview, which Bergman fights to the bitter end. CBS apparently has a lucrative merger that could be jeopardized by a lawsuit from Brown & Williamson.

Helen Caperelli (Gina Gershon) informs Bergman and Mike Wallace (Christopher Plummer) that they can not air the interview due to the impending suit–apparently, B&W can sue CBS for being a third party in the dissolvement of the confidentiality agreement. After much soul-searching, CBS finally airs the interview. All and all Wigand, himself, is even corrupted by the promise of money: tell us what you know, and we’ll pay you. Corporations aren’t ruled by people–they are ruled by money, and lots of it. This may be a depiction of a small time in the United States’ history, but its themes can be interpreted for any time. I believe in blowing the whistle isn’t a good thing because as you can see in the movie Wigand lost his family, his job, and he lost a lot of money “blowing the whistle”.

Wigand knew what he was getting him self into or else he would not have taking the job in the first place, I mean come on working for a cigarette company, a person knows cigarettes are bad for you. It is plan and simple he took the job knowing he was going to have to do something relating too cigarettes and he signed papers saying he would protect the company name. There for if he did not like what the job had to offer he should not of taken the job in the first place. Blowing the whistle in my mind, I would not do it if it came to me losing my family, and losing my income I do not think I would be able to do that considering the consequences . This is where I stand in the issue “Does Blowing the Whistle Violate Company Loyalty?” 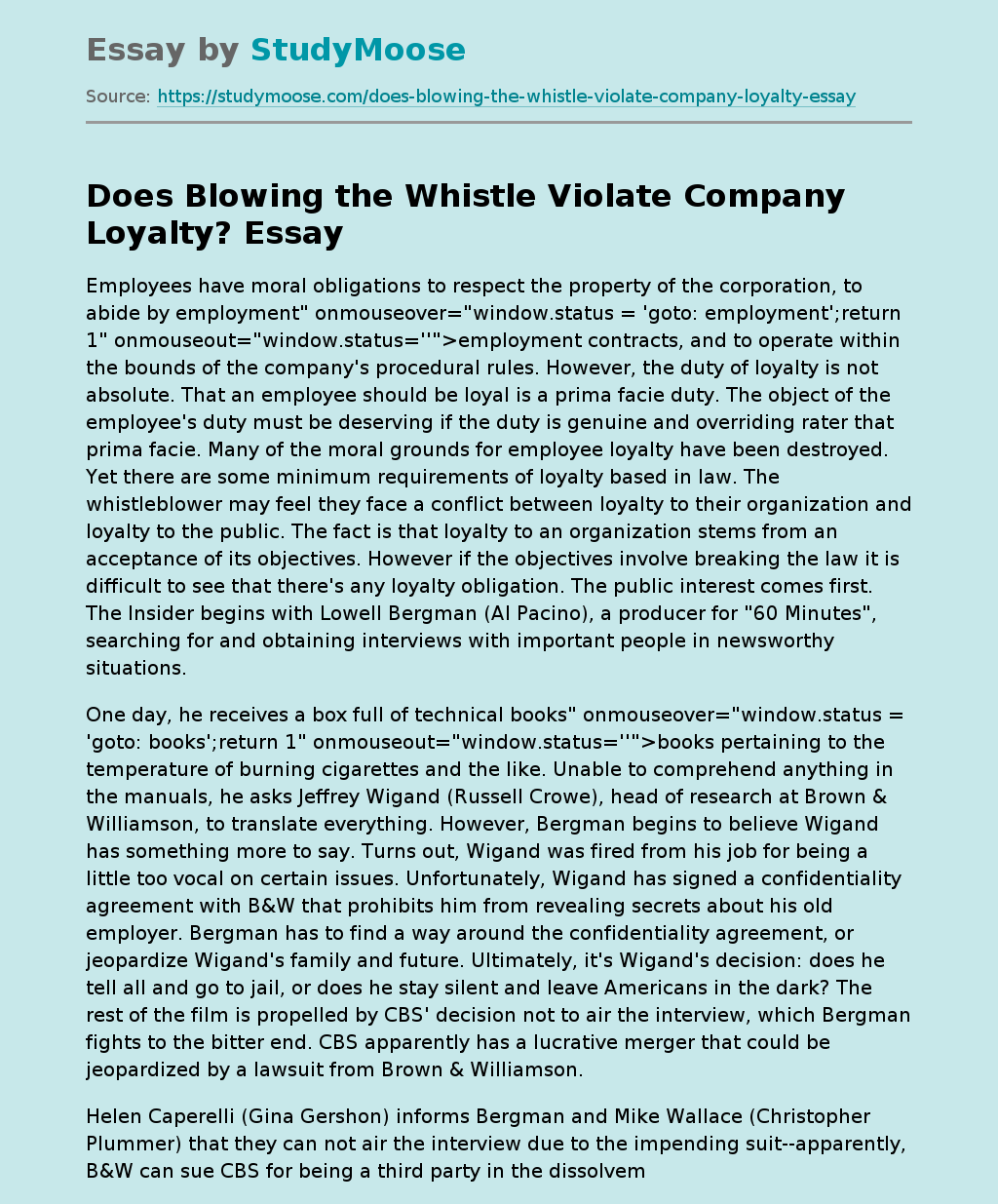